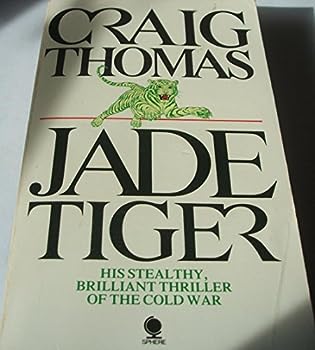 (Book #4 in the Kenneth Aubrey and Patrick Hyde Series)

This description may be from another edition of this product. THE DRAGON, THE BEAR AND THE TIGER For espionage veteran Kenneth Aubrey the world is suddenly full of clues that don't match up. A Chinese defector hauled from Hong Kong harbour trading asylum for the...

Published by Thriftbooks.com User , 14 years ago
Craig Thomas gives Patrick Hyde more to do in the second book featuring the Australian-born SIS field agent. This time, the plot involves Germany and a new treaty that will tear down the Berlin Wall. It is Wolfgang Zimmerman who is the architect of the treaty that will unify Germany. But there are those who don't want the cold war to end in Europe. The British pick up a Chinese defector with earth-shattering news that Wolfgang Zimmerman is in fact a Soviet agent. Aubrey is sceptical to this news. Zimmerman had saved his life during the war and will do his best to re-pay the favor by looking into the ugly rumors with the help of his agent Patrick Hyde. They follow the clues from China, to Australia, and finally back to Europe. Also, Chinese-American agent David Liu is asking around in China, but quickly finds himself on the run from not only the Chinese, but from his own side aswell. The book also continues the Petrunin/Hyde subplot from Sea Leopard, which will conclude in The Bear's Tears. Also notable for the debut of Tony Godwin, who Craig will use in his books to follow. Good stuff.

I read this while I was on a plane!

Published by Thriftbooks.com User , 20 years ago
Nail biting suspense to read! Great suspense! Just as good as anything Higgins writes!
Copyright © 2020 Thriftbooks.com Terms of Use | Privacy Policy | Do Not Sell My Personal Information | Accessibility Statement
ThriftBooks® and the ThriftBooks® logo are registered trademarks of Thrift Books Global, LLC