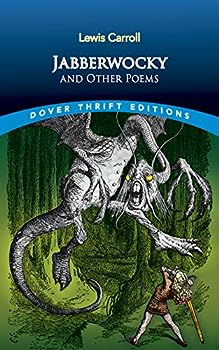 This description may be from another edition of this product. 'Twas brillig, and the slithy toves / Did gyre and gimble in the wabe...' wrote Lewis Carroll, author of Alice's Adventures in Wonderland and Through the Looking Glass , in his wonderfully playful...

Published by Thriftbooks.com User , 11 years ago
It's great to have all these Lewis Carrol's poems in one tiny boook. It is very entertaining and enjoyable!

A brilliant reinvention of a classic

Published by Thriftbooks.com User , 13 years ago
"Jabberwocky" is a poem inside of Lewis Carroll's "Alice in Wonderland," rather than a stand-alone piece of literature. Yet because of its intricate use of language, both real and invented, it fairly demands to be recited, quoted, and referenced (in everything from advanced particle physics to James Joyce), despite being relegated to the outback of "children's literature." But what does it mean? Christopher Myers has reinvented the poem, without changing one word, through a series of dramatic drawings. Yes, it is only 32 pages, but if you ever wanted to know what "reinvention" meant, you should read this book.

Published by Thriftbooks.com User , 13 years ago
My 2-year old grandson loves me to read this book to him. Of course, he doesn't know what all the words mean but, neither do I! However the sound of Lewis Carroll's words are melodius and the illustrations delightful. I think both of us understand that the Jabberwocky is a bad creature.

Published by Thriftbooks.com User , 18 years ago
O frabjous day! Callooh! Callay! From offbeat illustrator Joel Stewart comes this utterly charming picture book adaptation of the celebrated nonsense rhyme "Jabberwocky" from Lewis Carroll's classic children's novel "Through the Looking Glass." In muted, sepia tones sparked with lime green, lemon yellow and apple red, Stewart paints the mysterious Jabberwocky as a creature part English dandy, part Beetlejuice and part hedge. "And, as in uffish thought he stood, the Jabberwock, with eyes of flame?" and -- according to Stewart's whimsical drawings -- teeth of checker boards, guts of a robot, and elongated claws of regular manicure appointments. A supporting cast of characters appear and disappear without explanation (though, of course, none is needed) as do the odd cameo appearances of different postage stamps on every spread. None of this lovely nonsense should be surprising, as we've seen Stewart's quirky style before, in the picture book "The Adventures of a Nose," the strange story of a nose's quest for belonging. What is surprising, however, is that there is currently only one competing "Jabberwocky" book on the market: the intricate 1989 interpretation by Graeme Base, the author/illustrator of the bestselling "Animalia." 'Tis a brillig effort, to say the least. The most vorpal picture book effort in mome raths.

Published by Thriftbooks.com User , 22 years ago
This is my 2 year old's favorite book. We have read it so many time that he almost has the whole poem memorized!! The illustrations are wonderful for adults and children. I find new things in the pages almost every night. I highly reccomend it.

Jabberwocky and Other Poems Mentions in Our Blog