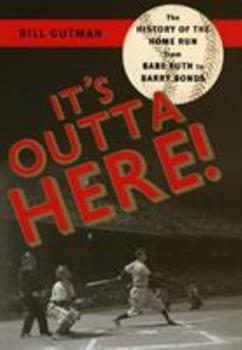 It's Outta Here!: The History of the Home Run from Babe Ruth to Barry Bonds

As Barry Bonds closes in on Hank Aaron's record 755 career home runs in 2005, attention will no doubt be drawn to the deep and colorful history of the "long ball" and its role in the development of major league baseball. Long thought to have changed baseball from the game played during the "dead ball era," Babe Ruth's 60-home-run year in 1927 showed that baseball had come full circle since 1876, when the highest number of home runs by a single player...

Published by Thriftbooks.com User , 17 years ago
If you're interested in the history of the home run this is the book to read. Mr. Gutman does a fine job of outlining the ebb and flow of home runs through the various baseball eras. He discusses the players, the changing dimensions of the stadiums, the tinkering with the baseball itself, famous home runs, and of course the steroid problem. My only complaint is there are a fair number of typos in the book and at least one factual error. Gil Hodges was not "just the second player since 1901 to hit four home runs in a game". Chuck Klein hit four out in one game for the Phillies in 1936, and Pat Seerey hit four out in one game for the White Sox in 1948.
Trustpilot
Copyright © 2022 Thriftbooks.com Terms of Use | Privacy Policy | Do Not Sell or Share My Personal Information | Accessibility Statement
ThriftBooks® and the ThriftBooks® logo are registered trademarks of Thrift Books Global, LLC