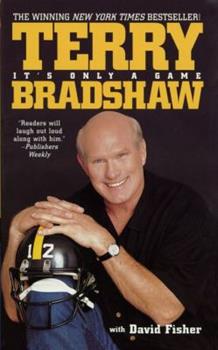 It's Only a Game

by Terry Bradshaw and David Fisher

He's a man who knows the importance of hard work -- and he's living proof that it pays off. TERRY BRADSHAW IT'S ONLY A GAME This is the absolutely guaranteed 100% mostly true story of the man who gained sports immortality as the first quarterback to win four Super Bowls -- and who became America's most popular sports broadcaster. As honest, unexpected, and downright hilarious as the man himself, It's Only a Game shows the many sides of Terry: the...

Published by Thriftbooks.com User , 18 years ago
I could hardly put this book down. Very interesting stories about his childhood, football career from grade school through the pros and life after the NFL. All the things that went on during his career in the NFL. I found this book very enjoyable. He doesn't hide anything and I admire his honesty.

David Fisher Deserves a Pulitzer for capturing Terry B!

Published by Thriftbooks.com User , 21 years ago
Man, I love this book. I grew up on Greg Gumbel and Terry Bradshaw's pregame show as a kid and have been a fan of Terry B's ever since. I love the way this guy talks football and the humorous style that he has developed over the years. No doubt, he's the type of guy who you'd like to call a friend. Living right off Harvard Square, it's refreshing to read a down-to-earth, homespun, hilarious book like this once in a while.

It's A Wonderful Life

Published by Thriftbooks.com User , 21 years ago
Don't let the title of this book mislead you. While Terry Bradshaw is best known as the four time Superbowl Champion quarterback of the Pittsburgh Steelers and a regular on the FOX Sunday football show, this is not just a book about football. It's about a life. Terry Bradshaw's resilency, humor, confidence and honesty are showcased in this book, and nothing in Bradshaw's life is too sacred for discussion. This book made me laugh out loud so many times that I had to read passages of the book to travel companions that were wondering what could be so funny. Bradshaw's account of his attempt at cattle ranching is hilarious. There is plenty of football in this book to satisfy any fan of the game as Bradshaw recounts his playing days from high school to his Superbowl victories with the Steelers. But there is so much more. Jimmy Stewart had to be saved by an angel to know it's a wonderful life. I'll let you decide for yourself if Bradshaw convinces you that it's only a game. If you read this book, come January you'll wish Terry Bradshaw was at your Superbowl party.

You Don't Have To Be A True Steeler Fan To Love This Book!

Published by Thriftbooks.com User , 21 years ago
I must admit before I go any further in my review that I am a Cleveland Brown fan for as long as I have been on this earth...let's just say I my generation was the 60's generation.This was one of those books that as soon as I saw the cover, I swooped one of the three copies available at this bookstore I was in and never cracked it open to "pre-read" the book jacket. The book written BY Terry Bradshaw and ABOUT Terry Bradshaw was enough for this finicky reader (only few noted authors get this kind of purchase from me). I remember Terry Bradshaw on the field leading the Steelers and I watch Terry Bradshaw every NFL weekend on the FOX pre-game. I quite didn't know what to expect out of the book when I swooped it up, as a lot of players and coaches who author a book tends to relive each and every second of each and every game they ever coached or played. I love football but it's great when you can also read and get to know the person who you are supposed to be reading about.The reader was alerted that there could be some serious laughter coming from the book and if caught in that situation in front of people...just look up, smile and point to the book! Let me tell you I ended up pointing more than once to the book with belly laughs and tears in my eyes....even sitting, of all places, on the tarmac in a jet liner at the Cleveland airport awaiting clearance for the jet to taxi and take off!In the book, Mr. Bradshaw gave us a view of what his childhood and family was like...what ethics he was taught as a child that influenced as a foundation of how he grew up, as a guideline for how he would handle the fame of being a NFL quarterback to being a Television Analyst and motivational speaker. (Okay so, I am leaving out his run in the Cosmetic Industry.) When life gave him lemons (as life does everyone at some time or another), he doesn't glide over it like frosting on a cake but he showed how he turned those lemons into lemonade. When you are reading this book, it isn't as if you are merely reading a book but that time just slips by as if you were sitting down with Terry Bradshaw with him sharing his life story. It's done in an honest, open and humble manner which this reader appreciates. If he made a mistake in life, he tells us about the mistake and his error of ways--he doesn't pawn the blame on to someone else to look good.Not only will you find yourself listening to a friend, time slipping quickly by but you will find yourself laughing outloud at times at Terry's antics and even some of the behind the scene antics. Laughter is truly good for the soul.It's an easy read and I don't think any NFL fan (regardless who your team is) will ever go wrong buying and reading this book. This Cleveland Brownie LOVED the book!The only problem was when it came to the end! I WANTED TO KEEP READING! Okay Mr. Bradshaw....when can we have another installment??

"It's Only A Game" Another TD strike for Bradshaw!

Published by Thriftbooks.com User , 21 years ago
First of all, let me just say I am a lifelong Cleveland Browns fan since January 31, 1958, the day I entered this world. I grew up watching Terry VS the Browns, in which I feel is the greatest, storied, legendary rivalry in Pro Football, past and present, bar none. I heard an interview with Terry Bradshaw on Jim Rome's radio show on Friday, August 10th, 2001. It was compelling to me. Terry Bradshaw's truthfullness, blunt honesty, in talking about his playing days with the Steelers had me highly impressed (for lack of a better word) to say the least. As an avid reader, I felt that if Terry's book "It's Only A Game" was as half as entertaining, as Terry's radio interview with Jim Rome, I knew it would be a great read. The next day (Saturday morning) I obtained a new, hot off the press, copy of his book. The book is EXCELLENT. I felt Terry Bradshaw was talking to me personally. As a Browns fan, I probably wouldn't give much thought or desire to anything written by a "Steeler", but Terry Bradshaw changed all of that! Oh, I will always be a Browns fan, but Terry's book gave me a completely new insight into Terry's life before and after his playing days. This book will forever have a place in my bookcase. I urge any NFL fan to read Terry's book, well written, articulate, compelling, fun and relaxing. As a husband, father and working stiff, this is what I look for in a book to relax with. Great job, Terry Bradshaw! You've done a good job with this novel! I could have easily read and enjoyed another 500 pages. Hopefully, there is a sequel in the future...
Trustpilot
Copyright © 2022 Thriftbooks.com Terms of Use | Privacy Policy | Do Not Sell My Personal Information | Cookie Preferences | Accessibility Statement
ThriftBooks® and the ThriftBooks® logo are registered trademarks of Thrift Books Global, LLC