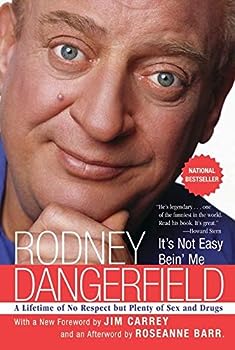 It's Not Easy Bein' Me: A Lifetime of No Respect but Plenty of Sex and Drugs

An American comic icon tells the story of his second-act rise from obscurity to multimedia stardom. "When I was a kid," writes Rodney Dangerfield, "I worked tough places in show business--places like... This description may be from another edition of this product.

Published by Thriftbooks.com User , 18 years ago
This book is a wonderful combination of Rodney's jokes, one-liners and life story. If you are looking for Rodney's deep dark secrets, you might as well forget about it. Rodney is careful not to reveal too much detail about his personal life and he masks the pains of his life with wonderful twists of humor. However, the reader will get a good sense of Rodney's struggles on his way to stardom. The book is written in the same way one would expect Rodney to talk. The topics sometimes appear out of nowhere but there's some level of chronological organization to make the reading easy and fun. If you are Rodney fan and want to have the basics on his life story with a lot of humor, you will appreciate this book.

TONS OF JOKES MIXED INTO AN INTERESTING LIFE STORY!

Published by Thriftbooks.com User , 18 years ago
I saw Rodney a couple of years ago in the Salt Lake City airport sitting in a chair waiting for his flight to LAX with his wife. He looked old and frail, but I gave him a wave and he gave me back a wink with his trademark okay sign. That was very cool.So when I bought this book I was really looking forward to an interesting read....and I found it.This book has a tons of jokes that are used to separate his stories (and he's got a lot of them) within the chapters. I now realize how hard he worked and really how little he received back in terms of material riches. (He only received $35,000 for Caddyshack with no residuals!) There are so many funny stories about show business, struggling as a comedian, sex, women, drugs, his youth, his health, friends, marriage, and of course, not getting any respect.I know that Rodney may not be with us very long as he is in his 80's and dealing with health issues, but I feel lucky to have seen him since the Ed Sullivan days, through the Johnny Carson years, the Miller Lite Beer commercials, the hilarious movies, and up to my incident at the Salt Lake City airport.Here's a real success story in disguise from a kind man who has made us all laugh for decades.This book adds so much to my appreciation of this humble and very human man. I'm going to watch "Back To School" and "Caddyshack" again soon.Thanks Rodney. You have my respect.

Published by Thriftbooks.com User , 18 years ago
And deliver he does in this honest, candid, humorous, poignant, and bittersweeet telling of his life. Rodney recounts his days growing up poor, sharing intimate episodes of shock and disappointment and his struggles as a young comic. He cleverly threads the various episodes of his life with jokes and one-liners which make you understand how they may have come about. It's not just a celebrity autobiography, but more a fascinating tale about an extraordinary man who has lived a difficult, colorful life, who has waged war with his demons (perhaps still does),who befriended some of show business's most famous stars, and was able to literally 'get his act together' to achieve one of entertainment's most legendary careers. The book is an entertaining, riveting and breezy read from beginning to end. Readers will come away with a unique understanding of the larger-than-life Rodney Dangerfield, why he ticks the way he does and why he has become the man he is. Besides his legions of fans, this book is also a must-have for anyone who has ever wanted to, wants to, or may ever want to be a stand-up comic. A great summer read!

Published by Thriftbooks.com User , 18 years ago
Bobbie Anne Jones,learning to be a writerNot only am I an avid memoir reader, but I also am a fan of Rodney Dangerfield. When I found out his book was coming out, I had to buy it. What I found was nothing like I expected. this man that for years has made me laugh is showing sides of him that are brutal and sad. The humanistic reality of him. I think because of this book and his willingness to come clean about his life, I find that I am even more of a fan of someone that is willing to tell it like it is. There is no glory story. This is honesty. I would recommend this book highly. Read and get to know Mr. Dangerfield. Also recommending other memoirs: Nightmares Echo,I Know Why The Caged Bird Sings,Name All The Animals, The Heart Is A Lonely Hunter
Trustpilot
Copyright © 2022 Thriftbooks.com Terms of Use | Privacy Policy | Do Not Sell or Share My Personal Information | Accessibility Statement
ThriftBooks® and the ThriftBooks® logo are registered trademarks of Thrift Books Global, LLC