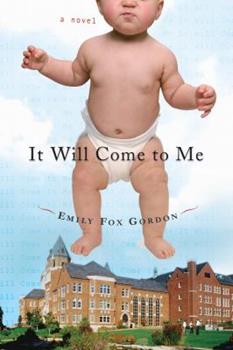 It Will Come to Me

A sharply observed comic novel about a writer straining against the role of faculty wife This first novel from the acclaimed memoirist Emily Fox Gordon is a tart, intelligent comedy of manners set on the campus of a large Southern university. It is also a story about the comforts and grievances of a marriage of longstandingabout change and continuity and the possibility of renewal in midlife. Ben Blau is the reluctant chair of the philosophy department...

Published by Thriftbooks.com User , 13 years ago
What a fun book! I worked at a small university at one time and this book captures the pettiness, ego centric environment perfectly. I found the ending to be a bit trite but the book was so entertaining, I could easily overlook it.

water for a parched soul

Published by Thriftbooks.com User , 13 years ago
I may be one of the "Women" that Gordon describes so aptly, but I don't care. I may not be one of them, too, and I still don't care. In any case, this is the most insightful, provocative, skillful, beautiful and satisfying book that I have read in years. I can't remember the last time I have read a book with so much enthusiasm and awe and sense of wonder at the word and the world. The story was not a masterful series of plot twists and artful maneuvers to keep me turning from page to page. Instead it grew up around me and became its own universe that I could inhabit. It was not overly sorrowful or sexful or comical, although it did have wonderful deftly done humorous touches. But it was a true rarity, in my opinion, in fiction today. It was truthful and human and I believe it increased my capacity to be both. I am grateful to Emily Fox Gordon as the earth must be when it has been dry so long it cannot even imagine rain. I will return to this book again and again as a reader and as an example of an honest-to-goodness inundation of remarkable writing.

An Entirely Original Take on Academia, Marriage, and Writing

Published by Thriftbooks.com User , 13 years ago
Appreciative readers of Emily Fox Gordon's two memoirs will be dazzled by her first novel, IT WILL COME TO ME. Gordon has successfully made the leap to fiction with her inside story of academia, deftly plotted with great good humor and appealing characters. Ruth Blau, a stalled writer, and her husband Ben, chair of a philosophy department, are the parents of a homeless young adult, and this dilemma electrifies their marriage with conflict. The book is full of surprises, in turns of plot as well as character, especially in Ruth's evolving relationships with campus arrivals Ricia and Charles. It's always a risk to write a novel from two perspectives, here Ruth's juxtaposed with Ben's, but each informs the other and adds to the momentum. Writers especially will love this book. I won't give away a scene I'll never forget, but it has to do with writing, female bonding, and wicked hilarity. The setting for that scene--you'll know what I mean when you get there--is pure genius. Gordon is one of our pre-eminent stylists, her observations at once deliciously snarky and profound, couched in knock-your-socks-off metaphors. I didn't want the book to end, even as I turned the pages faster. I couldn't imagine how Gordon would resolve the interwoven cliffhangers. But of course she does, in a very satisfying multivalent conclusion.

A smart comedy, and a page-turner

Published by Thriftbooks.com User , 13 years ago
Emily Fox Gordon's first novel is a sly academic comedy, replete with a hilarious parade of characters anyone who's spent time on a campus will recognize with great satisfaction. It is also the affecting tale of Ruth Blau, a once-accomplished faculty wife who, stranded jaundiced-eyed on the periphery of the college community and devolving into one of its caricatures, desperately seeks and eventually finds relief from her despondency. Readers of this page-turner will admire Ms. Gordon's sharp eye for detail and comic timing, as well as her warm sympathy for all of the delightfully bumbling, posing, maddening characters who populate the Lola Dees Institute. An intelligent read. Highly recommended.

Published by Thriftbooks.com User , 13 years ago
Emily Fox Gordon is known as the author of two extraordinary memoirs. Readers of her previous work appreciate the crisp precision of her observations, and her sensitive understanding of the different ways in which people suffer. They recognize her wit and her compassion, her exactness and her eloquence. In her debut novel, Emily Fox Gordon surpasses her earlier work. This is a brilliant novel, remarkable for its insights into the predicament of those who find themselves lost in a world to which they had dimly aspired but which they find that they do not comprehend. Superficially, it is an academic novel, precise and bitingly funny in its exposure of the follies of those who attach themselves to Universities and to Higher Learning. Every page is pregnant with witty apercus and pithy evaluations. Yet the folly of the eccentrics who populate her landscape is not her primary concern. Fox Gordon reveals, as in her earlier memoirs, a profound compassion for the plight of those whose unexpectedly diminished lives she describes. This is, overall, a novel of great compassion, and we leave it, not only with vivid memories of the shortcomings of her central characters, but also with an enormous sympathy for them. Also, perhaps, with hope. Great academic novels are not common. Great novels are rarer still. This is a book to cherish, partly because its evocation of characters is reminiscent of Dickens' skill in vivid portraits of the eccentric and the grotesque, even more because it has the encompassing sympathy of George Eliot. Readers should be grateful for it -- and for the fact that so distinguished a writer of memoirs has turned her hand to fiction.
Trustpilot
Copyright © 2022 Thriftbooks.com Terms of Use | Privacy Policy | Do Not Sell or Share My Personal Information | Accessibility Statement
ThriftBooks® and the ThriftBooks® logo are registered trademarks of Thrift Books Global, LLC