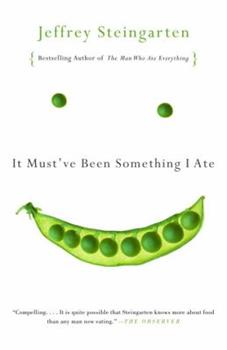 It Must've Been Something I Ate: The Return of the Man Who Ate Everything

In this outrageous and delectable new volume, the Man Who Ate Everything proves that he will do anything to eat everything. That includes going fishing for his own supply of bluefin tuna belly; nearly incinerating his oven in pursuit of the perfect pizza crust, and spending four days boning and stuffing three different fowl--into each other-- to produce the Cajun specialty called "turducken." It Must've Been Something I Ate finds Steingarten testing...

The Next Best Thing to Eating is Reading Jeffrey Steingarten

Published by Thriftbooks.com User , 16 years ago
I had previously not read anything Jeffrey Steingarten had written. After completing just the first essay in this volume of his collected columns, I realized my life had been the poorer for not reading his works before. Steingarten enthralled me from the beginning. Whether it is his quest to cook the perfect pizza, a huge undertaking including measuring temperatures in pizza ovens, timing baking, making exhaustive measurements in dough preparation (recipe included), his quest to make the ultimate hot chocolate (yes, recipe included), or his expose on whether there truly is a unique flavor to sea salt (no recipe included), Steingarten takes us on adventures we never knew existed, but now cannot do without. He eats around the world (though in this book most often to France), and we mentally eat with him. Steingarten is able to capture the essence of flavors, the excitement of discovering new foods, and the stories behind much of what we already eat. His essays are populated with learned chefs, butchers, writers, farmers, almost all professions related to food. There is never a dull moment in this highly entertaining and informative (a rare combination) book.

Written by the love child of Bill Bryson and Alton Brown

Published by Thriftbooks.com User , 18 years ago
This is a wonderful book, as was the first. Encompassing, more or less at random: travel and food, history and food, science and food, technology and food and a healthy helping of the sociology of eating, it was a fast and funny read. There are books devoted to each of these topics which does a more rigorous job at it, but no one else rolls them all into so fun and informative a package. And, as opposed to a book which deals strictly with, say, the science of food and cooking, you can use this one to learn the names of the best French cooks and the names of their and countless other worthy restaurants. I haven't previously found anyone willing to discuss the merits of caviar AND cricket tacos within the same volume. I'd recommend the purchase of this at the same time as "The Man who ate Everything" - you won't be able to read only one.

Just as good as "The Man Who Ate Everything"

Published by Thriftbooks.com User , 18 years ago
These two books should be considered as a pair - they are both of the same structure (small articles), same style (witty yet informative), same approach to knowledge (always trying to instill some) and goal (entertaining to the extreme). The only problem is that they tend to overlap in my mind....For example, which one had the hilarious French Eatathon, which one had the article on ripening fruit, where was the essay about cheese? Regarless, both of these are just excellent works for quick reads. Unlike MFK Fisher, whose ouevre reads like novels, Steingarten seems to have found his gait as the food reviewer in Vogue. The articles seem somehow "Magazinish" and this is not necessarily a bad thing. He takes a fresh approach to food and eating in general - not reverent but certainly serious.

It must have been something I read and loved!

Published by Thriftbooks.com User , 19 years ago
I feel I was lucky enough, first of all, to meet Mr. Steingarten at a book signing at DiPalo's Fine Italian Foods in Little Italy. While waiting to buy my usual selection of the best Italian cheeses, meats, etc. and talking to the usual shoppers with whom we've become such friends over the years, I started glancing through the book. I couldn't stop so it had to be one of my Christmas presents to myself. Others also felt the same way and Mr. Steingarten couldn't sign fast enough. And how wonderful to find a whole chapter about DiPalo's and Luigi DiPalo who has carried on his father's tradition, not only as the store owner but as a walking encyclopedia of everything Italian from every different olive oil and it's characteristics to the four-months seasonal Parmegianno Reggiano (he once had a tasting of all four seasons and explained the reasons why each season had it's clear differences). Mr. Steingarten wrote such a beautiful chapter on Luigi, his vast knowledge, his vast supply of the best of Italy that it took me back to the many years I have spent every Saturday morning there. Mr. Steingarten tells story after story in such superb style and panache and he is a man with such humility and joy talking to people that he is an icon in the food world. How lucky we are to be able to read this talented writer yet again. If you enjoy food and Jeffrey Steingarten (how could you not) you HAVE TO OWN THIS BOOK because you will read and reread it always.

Just as good the second time around...

Published by Thriftbooks.com User , 19 years ago
I loved Jeffrey Steingarten's first book of essays and was thrilled he'd released a second. I find his writing to be warm, witty and lovely. His affection for food is infectious, and I appreciated the inclusion of several recipes and where-to-buy suggestions (I will be making Pierre Herme's version of hot chocolate, NOT Laura Bush's!). It is rare to find a writer who combines erudition with humor and manages to remain accessible along the way....
Copyright © 2022 Thriftbooks.com Terms of Use | Privacy Policy | Do Not Sell My Personal Information | Accessibility Statement
ThriftBooks® and the ThriftBooks® logo are registered trademarks of Thrift Books Global, LLC