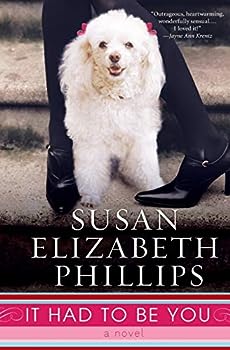 (Book #1 in the Chicago Stars Series)

This description may be from another edition of this product. The Windy City isn't quite ready for Phoebe Somerville -- the outrageous, curvaceous New York knockout who has just inherited the Chicago Stars football team. And Phoebe is definitely not prepared for...

Published by Thriftbooks.com User , 15 years ago
This book was so clever and extremely well written. SEP's love scenes are hot and creative. I will never look at football coaches the same way ever again. I can't wait to read the next in this series. By the way, this is the order to read the Chicago Stars series: IT HAD TO BE YOU (Phoebe Somerville and Dan Calebow) HEAVEN, TEXAS (Bobby Tom Denton and Gracie Snow) NOBODY'S BABY BUT MINE (Cal Bonner and Dr. Jane Darlington) DREAM A LITTLE DREAM (Gabe Bonner and Rachel Stone) THIS HEART OF MINE (Kevin Tucker and Molly Somerville)

Published by Thriftbooks.com User , 19 years ago
"It Had To Be You" is my favorite book by S.E.P. It is also the first book in her Chicago Stars football team series. Phoebe Somerville is the sexy and outrageous (like Marilyn Monroe) daughter of Bert Somerville, owner of the Stars. After Bert's death, Phoebe learns, to her surprise, that she inherited the team with the stipulation that she can retain ownership if they win the championship. If they loose, the team ownership will be passed on to her obnoxious cousin, Reed Chandler. This is Phoebe's wake-up call. Everyone considered her to be a bimbo. Even her father thought she was a failure. But with the help of General Manager Ron McDermitt, she proves to be more than capable to run the organization.Dan Calebo, head coach of the Stars, is everything Phoebe despises--a sexist jock with a one track mind. Dan thinks she is a meddling bimbo. Phoebe and Dan are both stubborn and sparks fly between these two from the start. Before long, there is more at stake than just winning the championship.This was my first SEP novel and to date it is my favorite of all her work. The story will make you laugh, cry, cheer and leave you with a well-satisfied feeling. You don't have to be a fan of football to enjoy this wonderful story. SEP's website indicates that "It Had To Be You" will be reissued in March, 2002.

Published by Thriftbooks.com User , 20 years ago
SEP is coming out in hardback shortly with her newest football book. I absolutely hate football and couldn't imagine at first liking these books. This held true until I read my first one, out of order in the series, "Nobody's Baby But Mine." I finished that one at about 3am of the morning after the day I'd bought it. Did I sleep late? Oh, no, I got up first thing to go to the bookstores to track down her other books! I read the entire series, as it then existed, in about 3 days. Essentially, every book involves a hero in football in some capacity and a heroine who is either also in football or who intersects with him for some other reason. In this book, the heroine, Phoebe, inherits the football team for Chicago from her recently deceased father. She inherits with a tricky provision though and has every chance of losing the team to her cousin. The hero, Dan, is the coach for her football team, a former player himself. Dan thinks Phoebe is a total airhead because she lived with and modeled for an artist in New York, has many gay friends and looks like a present day Marilyn Monroe. Phoebe has a way of giving people the business too who make stereotyped judgements just looking at her. She is no dim wit. Phillips combines LOL hilarity with great tenderness and heartfeltness. I'm happy to report that you really don't need to know anything about football since Phillips uses it primarily as a way of moving her plot and fully developing her characters. Even I found myself totally enmeshed in this football world.

Not your average romance...

Published by Thriftbooks.com User , 20 years ago
"I guess we're like oil and water.""I'd say we're more like gasoline and a blowtorch."This quote from _It Had To Be You_ basically sets the undertone for the whole book. I love Susan Elizabeth Phillips, and I was thrilled to get my hands on _It Had To Be You_. I'd heard so many things about her football series that I couldn't wait to read the book that started it all.Pheobe Sommerville just got herself a football team. After her dog, Pooh, peed on her father's grave, she found out that her father left her his Chicago Stars. Now, all she has to do is learn what to do with that little ball covered in pig skin called a "football". For, even though her father has owned the team for about a decade, Pheobe hasn't come in contact with him for longer then that. She's been spending her time flouncing around the world and making a name for herself as a sexpot bimbo. Little does anyone know that behind her curvy body lies an intelligent mind and a wounded soul.Dan Calebow, the Stars coach, has overcome childhood poverty and abuse to become a successful football player and coach. Needless to say, he is furious that Pheobe inherited the team. When the two meet, sparks fly, tempers flare, and passions roar as the reader gets ready for the time of her/ his life. Pheobe learns how to deal with the team as Dan learns how to deal with Pheobe. And, the two are undeniably attracted to each other. Can the Stars win the AFC Championship so Pheobe can keep the team? Will Pheobe and Dan put away their pride so that they can have a love for all time?I really loved _It Had To Be You_ and for many reasons. When I first met Pheobe, I thought, Oh great, I'll have to read about her for the rest of the book. But, I quickly saw that she was an amazingly complex character and she goes through a wonderful change through out the book. Dan is this big chest thumping, beer belching, womanizing chauvanist, and I usually don't like my heroes to be quite this alpha. But, he is definitely a charmer and as Pheobe fell under his spell, so did I.Susan Elizabeth Phillips is known through out the romance world for her witty, uncanny humor. It shines in _It Had To Be You_. Although there are definitely the darker sides to this book, it has such a cornball, smart humor to it that everyone will love it. Susan Elizabeth Phillips has an amazing talent for romance and humor, a combination that is dynamite. Not many books can have you laughing in stiches one second and crying your eyes out the next. _It Had To Be You_ is one of those special few. So, if you enjoy lovely romance and knock your socks off humor, _It Had To Be You_ is a must read.

Published by Thriftbooks.com User , 21 years ago
This was the first book by Ms. Phillips that I had ever read. Since then, there is only one -Hot shot- that I have not loved. This book is so lovable! Phoebe Sommerville is such a great character! Strong yet vulnerable, she is the kind of heroine that stays with you. And Dan Calebow is simply gorgeous in so many ways. The plot ans subplots are interesting and complex, and most of the characters grow and develop through the book just like people do. The pace of the book is fast and the dialogues are natural and funny. The love scenes are sensual and hot, and so real -these are people not cardboard cutouts-. I've found out that you just can't put this book down, even when you are reading it for the umpetenth time!
Copyright © 2020 Thriftbooks.com Terms of Use | Privacy Policy | Do Not Sell My Personal Information | Accessibility Statement
ThriftBooks® and the ThriftBooks® logo are registered trademarks of Thrift Books Global, LLC