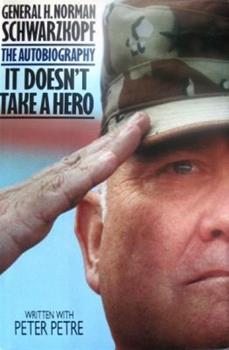 It Doesn't Take a Hero: The Autobiography

He set his star by a simple motto: duty, honor, country. Only rarely does history grant a single individual the ability, personal charisma, moral force, and intelligence to command the respect,... This description may be from another edition of this product.

It Doesnt Take a Hero

Published by Thriftbooks.com User , 13 years ago
Excellent transaction. Book arrived in better condition than I expected and within a short period of time. Would not hesitate to buy from this dealer again..........

Published by Thriftbooks.com User , 14 years ago
"Cometh the hour, cometh the man" is an adage that was penned for men such as General H. Norman Schwarzkopf. It is very easy for Englishman to prefer British heroes over those from other countries. Some might say it is even easier for United States citizens to acknowledge the achievements of their own citizens whilst deprecating those of any other nation. Eisenhower, for example, was a great man - but so was Montgomery! This book, however, is about a man who is not in open comparison to any. He tells an account of his own life which, as others have already stated, is so honest as to be brutally so. How odd that the fickle finger of fate is able to steer any man towards his ultimate destiny. What if Eisenhower (or even Montgomery) had joined the Navy?, what if Norman Schwarzkopf had railed against his father's wishes and "not" joined the US Army? But they did and I am unable to avoid that cliché which demands that "the rest is history." Having said that, I would suggest General Schwarzkopf's contribution to that history is as great as any man's. Other reviewers have sought to express their views in their own ways and quite rightly so! Some of those reviews give the reader a quick impression - "it's a great book" and all that, whereas others seek to paraphrase the book and, is so doing give the reader a better impression of what is found within it's pages. Me, well, for the very first time in a long time, I feel as though I have read a book. Just think about that. Take a moment to look at any of my book reviews, then click on that button which says "see all my reviews" and you will see what I mean. Some of those books are on subjects I feel very passionate about. Some are great books and well worth the 5 star rating given. Others are less than ordinary and not even worth the single star one is required to donate to the charitable cause that best describes that particular offering in print. Then I find a biography from a retired general who came to prominence during the first Gulf War, the biography of a man who recognised it does not take a hero to order men into battle, the biography of an ordinary bloke who did good, served his country and the cause of freedom well and expects nothing in return. Buy it. Read it. Only then will you also appreciate what I mean by having "read" a book. There will come a time when you will read it again. NM Retired British Army major.

Published by Thriftbooks.com User , 22 years ago
I liked this book much more than Collin Powell's book. It just seems more honest and less self serving, General Schwartzkopf admits mistakes, and positions he has taken for political reasons. It makes a very interesting read about decision making in the higher ranks of the military. If you've read Powell's book, you'd like this one, and if you haven't, read it after this as a great supplement.

Published by Thriftbooks.com User , 23 years ago
One of the things that stood out, and something most probably don't know about Gen. Schwarzkopf, is what a truly interesting life he had. Living all over the world, he absorbed a lot of the culture which certainly helped him later in life, and especially during the Gulf War.Having been in the military, I was struck at his absolute love and admiration he had for the "grunts" in the field. He loved every one of them....something you don't often see much of.I lent my copy of this book to my father to read, and have never gotten it back. I only wish I could have gotten a hardcover copy when it first came out. Go ahead...spend the money and read a book which is truly worth reading.

As a veteran _ Amazing_

Published by Thriftbooks.com User , 24 years ago
As a veteran I find that the accuracy, the notes, research and espiecally the historical and political events leading up to the event(Operation Desert Storm) are absolutely amazing. History will decide the outcome but today it is done
Trustpilot
Copyright © 2022 Thriftbooks.com Terms of Use | Privacy Policy | Do Not Sell My Personal Information | Accessibility Statement
ThriftBooks® and the ThriftBooks® logo are registered trademarks of Thrift Books Global, LLC