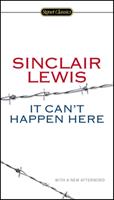 "The novel that foreshadowed Donald Trump's authoritarian appeal."--Salon It Can't Happen Here is the only one of Sinclair Lewis's later novels to match the power of Main Street, Babbitt , and Arrowsmith . A cautionary tale about the fragility of democracy, it is an alarming, eerily timeless look at how fascism could take hold in America. Written during the Great Depression, when the country was largely oblivious to Hitler's aggression, it juxtaposes...

another great book by a great author

Published by Thomas G. Petri , 3 months ago
"It Can't Happen Here" by Sinclair Lewis is a dystopian novel from 1935. In light of current events, it is unfortunately also a prediction of what happens when voters are conned into believing stereotypes and bluster from sources repeating myths, playing on their ignorance with solutions that seem workable. These solutions, in fact, endanger all that we hold dear. In Sinclair's novel, the people who realize the dangers in the "easy" solutions offered by the would-be dictator soon find themselves enemies of the state. Our protagonist and his allies become criminals, at first without any changes in their actions. of course, unjustified persecution leads them to actively pursue opposition to the fascist government. The rest is what keeps you reading, hoping for a restoration of sanity. But, as you read many, out comes to mind. Keep reading! This boy is a hell of a writer. This review was written for LibraryThing Early Readers

We have power, and power is its own excuse

Published by Thriftbooks.com User , 16 years ago
This is a book of 'a 'Liberal', scorned by all the nosiest prophets for refusing to be a willing cat for the busy monkeys ... at worst, the Liberals, the Tolerant, might in the long term preserve some of the arts of civilisation.' Why is he a liberal? Because 'everything in the world has been accomplished by the free, inquiring, critical spirit', and 'the preservation of this spirit is more important than any social system whatsoever.' But this formidable book contains also a clear warning: 'the men of ritual and the men of barbarism are capable of shutting up the men of science and of silencing them forever.' 'We can go back to the Dark Ages! The crust of learning and tolerance is so thin.' This book is the story of a democratically elected US dictator: a demagogue with a racist and antifeminist agenda, who turns the US into a fascist State: 'He treated the entire nation like a well-run plantation on which the slaves were better fed than formerly, less often cheated by their overseers, and kept so busy that they had time only for work and for sleep.' This book is the work of a visionary (Mao's China, Franco's Spain, Stalin's USSR, Pinochet's Chili, Pol Pot's Cambodia, Suharto's Indonesia, Hitler's Germany, Castro's Cuba...): 'People were afraid to say whatever came to their tongues ... men looked about to see who might be listening before they dared so much as say there was a drought ... for someone might suppose they were blaming the drought on the Chief.' Opponents were incarcerated, shot or put in work-camps. Books were gleefully burned and the media turned into mere propaganda. The fascist State here, however, is torn asunder from within (personal infighting, power cliques, brutal murders) and from without (those people who without fear of their lives continued to fight for freedom, democracy and tolerance). The main character in this book, a courageous editor of a newspaper, should be an example for today's newsmen, who are completely gagged by the powerful and paralyzed by autocensure. Sinclair Lewis is also not blind for general human weaknesses: permanent insatisfaction, envy, following of prophets 'who had felt called upon to stir up the masses to save the world and save it in the prophet's own way', or falling for 'men of superior cunning, of slyer foxiness than slower-witted men, however worthy.' This book is a tremendous achievement and still very actual. A must read.

Democracy voted out of office

Published by Thriftbooks.com User , 16 years ago
To quote one of the characters early on: "Like h*ll it can't." Windrip is the charismatic politician: a great showman, but not comfortable when people use big words. He's swept into office on a tide of revival tent enthusiasm and anti-intellectual popularism. He promises a pot of money for everyone, and (this is the 1930s, remember) promises to put in their place all the right minorities with the strong arm of his loyal followers. Of course people vote for riches for everyone - or at least, everyone who matters. Then he's in. The loyal followers become a private army, answerable to no one. The nation is redrawn into a network of concentration camps, prisons, labor camps, and terrified citizenry. The bulk of the book documents the incredibly rapid decline into barbarity. Despite the crushing tyrrany, a resistance emerge, and among people who might not have looked very brave. Without giving any spoilers, the end is ambiguous but optimistic. The first half of the book is pretty much guaranteed to give you that sinking feeling if you've read the news in (or about) the America of Pres. Bush II. The rise of fundamentalist Christians as a political force has a familiar sound to it. So does the the discussion of "... when the hick legislators in certain states ... set up shop as scientific experts and made the whole world laugh itself sick by forbidding the teaching of evolution." I want this book to be irrelevant. I want people to look at it and ask "what is he talking about? who could believe even the first word of it?" I want its warning to be forgotten by people who no longer need to be warned. The fact is that this 70 year old book still as relevant, familiar, and as urgent as ever. This book still matters - or should. //wiredweird

It CAN Happen Here!

Published by Thriftbooks.com User , 18 years ago
Surprisingly, Sinclair Lewis' darkly humorous tale of a fascist takeover in the US, "It Can't Happen Here," is not merely out-of-print, but also quite hard to find. As dated as it is (1935), its themes will be quite familiar to Americans today. It starts with the highly contested election of an oafish yet strangely charismatic president, who talks like a "reformer" but is really in the pocket of big business, who claims to be a home-spun "humanist," while appealing to religious extremists, and who speaks of "liberating" women and minorities, as he gradually strips them of all their rights. One character, when describing him, says, "I can't tell if he's a crook or a religious fanatic." After he becomes elected, he puts the media - at that time, radio and newspapers - under the supervision of the military and slowly begins buying up or closing down media outlets. William Randolph Hearst, the Rupert Murdoch of his times, directs his newspapers to heap unqualified praise upon the president and his policies, and gradually comes to develop a special relationship with the government. The president, taking advantage of an economic crisis, strong-arms Congress into signing blank checks over to the military and passing stringent and possibly unconstitutional laws, e.g. punishing universities when they don't permit military recruiting or are not vociferous enough in their approval of his policies. Eventually, he takes advantage of the crisis to convene military tribunals for civilians, and denounce all of his detractors as unpatriotic and possibly treasonous.I'll stop here, as I don't want to ruin the story -- I can imagine that you can see where all this is going.

Published by Thriftbooks.com User , 22 years ago
....it can happen here. Anyone who is aware of current news and political issues and history, will find this book, written in the 1930's, to be astonishing. I read this in high school, and remembered it years later when I was putting books on my web page. Why did I remember it? Sinclair Lewis wrote this long before the world became aware of what was going on in Nazi Germany. This illustrates the often ignored fact that we can tell what is going on around us, if only we listen to the signs and signals, and stop burying our heads in..oh, well, in books and the internet and TV shows. He takes the story to America, where people's response to what's going on in the world is "It Can't Happen Here" (not that any of us would say that these days...). Anything that Can't Happen Here, then, isn't our problem. Until, of course, it happens here...This is a good book to read if you like messages in your fiction - (did you enjoy reading "The Lottery?")
Trustpilot
Copyright © 2022 Thriftbooks.com Terms of Use | Privacy Policy | Do Not Sell or Share My Personal Information | Accessibility Statement
ThriftBooks® and the ThriftBooks® logo are registered trademarks of Thrift Books Global, LLC