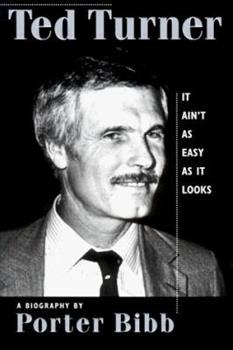 Ted Turner: It Ain't as Easy as It Looks

Ted Turner, America’s maverick multi-billionaire, is best known as the creator of CNN who revolutionized the news industry, married Jane Fonda, and then became the largest shareholder in media... This description may be from another edition of this product.

Published by Thriftbooks.com User , 19 years ago
There is hardly a more colorful person in the history of twentieth century media than Ted Turner. He is mad, visionary, obsessed, gutsy, bi-polar, swash-buckling, touching and very likeable. Ted's CCN inspired me to push ahead with my own small technology company. After touring the early CNN headquarters in Atlanta, I brought back colorful CNN souvenir caps for my staff; and we wore them for a time in our office whenever we brain-stormed. This is a great and detailed account of Ted's adult years from family billboard company executive to AOL Time Warner vice chairman.You'll rout for this multi-billionaire after reading the book.

Published by Thriftbooks.com User , 20 years ago
Ted Turner's life story would make a better movie than many of the old classics he bought the rights to broadcast on his stations. From allegedly giving a sales pitch in the nude (among other things), to wild speeches in hotel lobbies, winning an incredible number of sailing races, and even his own "Alistair Cooke" style film intros, this guy is full of antics.I was impressed by the depth of research Mr. Bibb brought to this book. I wish their was a little more of Ted quoted in the book, but this is an excellent amount of info on the man's life.- Julia Wilkinson, author, "My Life at AOL"

Published by Thriftbooks.com User , 23 years ago
This long, intricately constructed, infinitely documented biography reads like a film script, which is the only appropriate format for a biography of this larger than life subject. Ted Turner has led a life only a Hollywood screenwriter could concoct, but Porter Bibb has packed it all between two covers.
Trustpilot
Copyright © 2022 Thriftbooks.com Terms of Use | Privacy Policy | Do Not Sell or Share My Personal Information | Accessibility Statement
ThriftBooks® and the ThriftBooks® logo are registered trademarks of Thrift Books Global, LLC