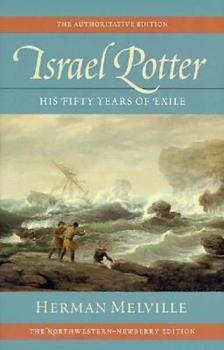 Unique among Melville's works, Israel Potter was the author's only historical novel, presuming to offer the life history of Revolutionary War figure Israel Potter--based on Potter's own obscure narrative Life and Remarkable Adventures of Israel R. Potter --and featuring characters such as Benjamin Franklin and Ethan Allen. In offering the manuscript to his publisher, Melville assured him, "I engage that the story shall contain nothing of any sort...

Melville From the Hip

Published by Thriftbooks.com User , 11 years ago
This edition of Melville's ISRAEL POTTER is one of the most accurate will will have in terms of text and also a good introduction to the lighthearted side of Herman Melville. His satirical portraits of Great Americans and their various hypocrises are central to the book, as the battle action of John Paul Jones is to adventure. For those interested in a more modern interpretation of the Israel Potter legend, see GONE OVER by David Chacko and Alexander Kulcsar--one of the best books of 2009.

The least known and most humorous of Melville's works.

Published by Thriftbooks.com User , 24 years ago
This book is at the same time the least and the most "Melvillian" of all Melville's corpus. Melville wrote in Moby-Dick that "two thirds of the world revolve in darkness." This idea certaily holds true for most of Melville's works, but not Israel Potter. In this uncharacteristically light-hearted and crisply written rewriting of American history, Melville gives an early literary version of Woody Allen's film Zelig. The character Israel Potter is that same sort of insignificant historical non-entity who just happens to get caught up in incredibly significant historical moments. In his various wanderings Israel meets and becomes politically involved with a trio of the most important American patriots--Ben Franklin, John Paul Jones, and Ethan Allen. It is through these encounters that Melville subtlely (and sometimes not so subtlely) realizes his critical agenda and those darker themes that dominate so much of his other work begin to show themselves. In his portrayal of Franklin, Melville takes a bash at what he sees as the exemplar of American "genius"--the same American genius that ignored and misunderstood his most significant works and forced him into obscurity and poverty in his lifetime. Melville sees Franklin as representative of all that is wrong with the American character--he is parsimonious, small-minded, hard-headed, and morally hypocritical. In the other two historical figures, John Paul Jones and Ethan Allen, Melville finds redemption. In them he sees represented more of that European idea of genius, the manly half-savage/half-civilized genius of Thomas Carlyle. Like Queequeg in Moby-Dick who is described as "George Washington canabalistically rendered," Jones and Allen are wildmen in a civilized society, raging against the world as they utter their outrageous and at times incomprehensible truth. A fun yet undenialbly thought-provoking read. Enjoy
Copyright © 2020 Thriftbooks.com Terms of Use | Privacy Policy | Do Not Sell My Personal Information | Accessibility Statement
ThriftBooks® and the ThriftBooks® logo are registered trademarks of Thrift Books Global, LLC