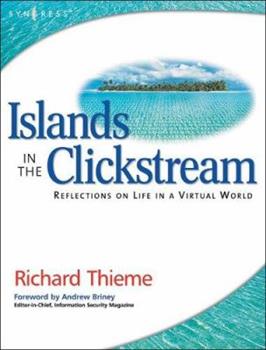 Islands in the Clickstream: Reflections on Life in a Virtual World

Presents a collection of essays that focus on the effect of computers and technology on the world.

Published by Thriftbooks.com User , 17 years ago
It took me a long time to digest this book, which is jam-packed with quoteable insights, new perspectives on familiar ideas, and inspiring thoughts. Reading this collection of essays, which were written as periodic email columns over a span of seven years, felt like trying to eat a rich, dense dessert in one sitting. This is a book that should be savored slowly--by everyone who has any connection to technology. It's an amazing work. I can't think of any book that's quite like Islands in the Clickstream--it doesn't fit into any established categories. Syngress Press, the publishers, describe themselves as providing "Career Advancement Through Skill Enhancement," and say it should be shelved in "Computers/General." But what this book actually contains is a collection of secular sermons. They fill the niche of an idealized homily--a short talk that reconnects its listeners to a larger context for their daily lives, inspires them to be better people, and makes them think about deeper issues than the everyday grind--but without any religious context, and addressing technology specifically. Thieme says "...these are sermons...in the sense that sermons form and inform a community that chooses to gather to hear them." It's not too surprising, then, that Thieme tells us he was an Episcopalian priest for sixteen years. These essays do have a few flaws I associate with a genre like sermons, ie basically ephemeral and not designed to be read en masse--sometimes there's a palpable stretch for the inevitable clever final sentence, and we get some repetition of favorite concepts and quotes like "sanity is contextual." There's also a hint of bombast, not exactly pretentiousness, but a weakness for over-stated metaphors and over-heated symbolism. Thieme's got a liberal hand with buzzwords: nexus, fractal, cyborg, panoptic, granular, convergence, paradigm, morphing, etc. I also think he's barking up the wrong tree in one or two essays where he talks about UFOs and remote sensing, but he's not credulous by any means. These are minor quibbles. To give an idea of how much this book impressed me: I typically collect a quote or two from a book I read. A great book will yield four to six. I copied down about FIFTY quotes from Islands in the Clickstream--new ideas, brilliant encapsulations of thoughts that have vaguely crossed my mind, inspirational statements. Here's just a small sampling: "The edge is the new center. The center of a web is wherever we are." "When things are going well, accountability diminishes. Then when things don't go well, there's chaos." (written in 1997, with a prescient reference to the financial tech bubble) "'Out of the box' thinking is just a name for climbing out of one box into a little bit bigger box." "Good tools work regardless of why we say they work. Technical tools and spiritual tools alike." "That's the problem with oracular truth: the opposite is nearly always just as true. Oracular truth is more like a mobius strip than

Published by Thriftbooks.com User , 17 years ago
I've read the first few chapters while waiting in a restaurant for the plane from DefCon. Even got the signed copy of the book. All worth the while to read. Once I've started to read, I did not stop untill someone interrupted me to say it was time to catch the plane. It was one of the books that helped me figure out what I even attended Defcon other to learn and network. It was to seek a critical theme of one of the chapters. As a person who buys books for single chapters, this book opened up eyes and minds on the operations of the Internet and how it brings together ideas of the world.

Published by Thriftbooks.com User , 17 years ago
"Enjoy the journey. Be prepared for the detours. Always look back where you came from". These words, by my late father come to mind as I read Islands in the Clickstream. Richard Thieme has earned his 'wings' in cyberspace. He shares his intelligence - his brilliance, really - as he steers his starship through these diverse Islands. A long time online reader, I am so glad he finally published Islands in the Clickstream as a book so his reflections can be shared with the world. J.L. Marais

Published by Thriftbooks.com User , 17 years ago
I've been reading Richard's essays since he started writing them. At last--now a collection that is bound and can replace my 3-ring notebook of his wisdom. Reading Richard is like playing up in tennis: he makes you stretch to find a new place to land a winning idea. His prose calls to mind the best of fiction and non-fiction authors. His metaphors are powerful. And his insights are deep. If you want shallow writing--go elsewhere. You won't find it here. Be prepared for truth. It's a rare commodity these days.

Published by Thriftbooks.com User , 17 years ago
As a security professional and a man who cares about more than the material world, I've been waiting for this to be published for a long time. I've attended DefCon solely to hear Richard speak and have never been disappointed. His writing insightfully uncovers some of the most important contemporary issues regarding technology, politics and spirituality. In dark times, his writings are where I turn for solace and inspiration. Whether you are a techie or not, if you live in the 21st century, you need to read what this man has to say.
Trustpilot
Copyright © 2022 Thriftbooks.com Terms of Use | Privacy Policy | Do Not Sell My Personal Information | Accessibility Statement
ThriftBooks® and the ThriftBooks® logo are registered trademarks of Thrift Books Global, LLC