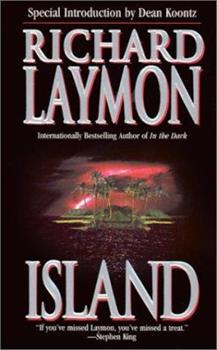 Rupert Conway's getaway cruise with seven others abruptly ends when their yacht explodes and all are stranded on an deserted island. Rupert and the other castaways soon discover that in the dense jungle a murderous maniac--with a clever mind and a taste for blood--is on the loose. He doesn't like his new neighbors and plans to slaughter them--one by one.

Laymon Does It Again

Published by Thriftbooks.com User , 15 years ago
It's a shame we won't see more classic horror novels like "Island" penned by the late Richard Laymon. He's in true form here, doing what he does best ~ piling on the suspense (one layer after another), assaulting us with a series of gory killings, enticing us with juvenile sexual fantasies, misleading us at every turn, and, ultimately leaving us shocked in the end. Laymon writes this novel through the perspective of Rupert Conway, a college freshmen and castaway on a tropical island, surrounded by a quartet of beautiful women whose partners are disappearing one by one. Rupert's voice is fresh and young, and although his fascination with the nude female form may seem a bit repetitive at times (perhaps even repulsive to some), it soon becomes aparent that sexual desire is the true theme of this book. This story explores the animalistic sexual urges of man, and the danger of unbridaled power and lust. As in any good Laymon book, the author has a morbid talent for violently abusing the characters we've come to love at the points when we'd least expect it. Rarely can one expect a happy ending to one of his books, and this one should leave you just as shocked as any other. If ever you've enjoyed a Laymon novel, don't let this one pass you by.

Published by Thriftbooks.com User , 16 years ago
Being trapped on an island is all the rage these days: Survivor, Lost, and Castaway. But, in typical Laymon fashion, ISLAND takes the common theme and pushes it in new, extreme directions. If you're familiar with Richard Laymon's work at all you know the currency he deals in: schoolboy fantasies and hardcore horror. Laymon seems to have found the ultimate outlet here with the story of a young man trapped on an island after a boating accident. Take the normal dram of being separated from civilization with limited food and water, mix in a mysterious killer, heap on the typical Laymon madness, then top that off with a shocking finale and you've got a tale that makes Castaway look like a comedy. It's not high art (and you're probably not expecting it to be), but if you're a fan of survival stories, extreme adventure, or Richard Laymon in general you're making a safe bet with ISLAND. For more reviews visit our site at http://www.thereaderreviews.com

Published by Thriftbooks.com User , 17 years ago
The minimal research I had done regarding Richard Laymon quickly informed me that he was one author to look out for, especially since he was so lauded by his peers: Bentley Little, Dean Koontz, and Stephen King -- just to name three -- couldn't say enough good things about him. So, on seeing Island on my next visit to the library, I picked it up. That's one decision I'll never regret. Island is 500 pages of tropical terror. Rupert Conway tells the story through a journal kept on what was supposed to be a day-long picnic, but turned into a harrowing experience when the boat of the family who invited him exploded, killing one member and leaving the rest of them stranded on an uninhabited island. Their main issues at first are keeping a fire going and getting enough to eat, but their troubles increase when they find out that the island isn't uninhabited as family members start being killed off one by one, the men first. Rupert is one of the most realistic characters I have read in recent fiction: delightfully flawed in his obsession with the opposite sex. Eighteen years old, he spends an inordinate time in appreciation of how the female castaways look in their bikinis, with especially loving descriptions of the differences in their breasts. Not surprisingly, he has fantasies of the daughters (the youngest of which is his age and invited him on the trip), and their mother figure (who isn't much older than the eldest daughter). But the main point of recommendation for me is that Island constantly surprised me. All through the five hundred pages, I never knew what was going to happen next. This is partially because Rupert often lets his libido rule his decision making and so makes stupid choices, but it is also due to Laymon's imagination. He kept me guessing all the way up until the final sentence and if there's one thing about a novel that will cause me to instantly recommend it, it is that it surprised me because, after all I have read through the years, that is increasingly difficult to accomplish. Combine that with the humorous way Laymon has of looking at even the most terrifying situations, and you've got yourself one cracker of a great read. Despite its length, Island is also a quick read. It blazes by and Laymon's plotting kept me reading far later than I should have been. I can usually put a book down if it's time to sleep, but I had to know how Rupert's predicament was going to turn out. Although I lost a couple of hours of sleep, it was worth it and I was most definitely not disappointed. Richard Laymon is now on my "must read" list and Island is the cause of it.

Laymon does it again!

Published by Thriftbooks.com User , 19 years ago
I've read about 5 of Laymon's books and I loved them all. Island is no exception. I LOVED this book. The world lost a literary great when Laymon passed away. Rupert Conway is the teller of this story. He's thought that when his girlfriend asked him to come on a family vacation, he'd have a time of his life, an adventure he'd never forget. He was right about that. After the boat explodes, the girl's family and Rupert swim to an island. There's plenty of fresh water and food...and a killer. The killer plans to kill off one by one so the killer can put his sick and twisted plan into action.Laymon is such a talented writer. He had the ability to keep the reader glued to the page with many plot twists and turns. Many times I'd tell myself that I'd just read to the end of the chapter, then go to bed. Well, that didnt' work. I read this 504 page book in just two days. I dare anyone to start this book and try to put it down. Guess what, ya can't. Laymon also can create characters you care about and want to read about. Laymon created wonderful characters in Rupert and Connie. What's typical in Laymon's writing, is that you even care about the chatacters that are bad. The reader will want to get to know all of them, want to know everything about them.I know people who like to skim through a book to get the "feel" of it. Don't do this with that book. If you do, you may run into spoilers and ruin the book.I can't say enought good things about this book. If you start it, I know you'll love it. You won't be sorry.

Published by Thriftbooks.com User , 19 years ago
Obviously, this one is not for everyone. For a big book, I read this in almost two days. Its the story of a boating trip gone awry when a group of people are having a picnic on a supposedly deserted island. When the boat blows up, they are all stranded there. This one is narrated by a horny teenage boy named Rupert, who is trying to survive, save his women and sneak peeks at them. I found this one to be suspenseful, spooky and funny at the same time. I have known guys like Rupert so I didn't find his sex-obsessed mind to be all that unbelievable.If you want to read Laymon novels, you must be warned that the narrator is always horny, the women always end up naked and there is campy fun elements that add to the book. In Island, everyone ends up in the nude including the guys, the plot is strange and its one heck of a ride. A lot of people didn't like this, but I did. If you are into the more literary horror, you won't enjoy this, but if you like horror that is funny and you don't offend easily you'll love it.Richard Laymon was one of the funnest writers in horror. Island reminds me of one of those late night Cinemax films, but at the same time, it draws you in.Good, campy fun, but frightening and spooky at the same time.
Copyright © 2020 Thriftbooks.com Terms of Use | Privacy Policy | Do Not Sell My Personal Information | Accessibility Statement
ThriftBooks® and the ThriftBooks® logo are registered trademarks of Thrift Books Global, LLC