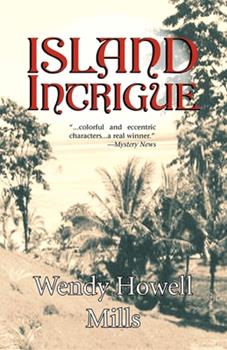 Sane people are boring, Sabrina Dunsweeney tells her friends when they try to convince her that she is crazy to travel to tiny, isolated Comico Island to recover from a cancer scare and the sudden loss of her mother. Sabrina, who has a tendency toward hypochondria and very bad cooking, soon meets Lima Lowry, the tallest tale-teller on the island. He tells her all about the pirate Walk-the-Plank Wrightly, who died two hundred years ago and who has...

Published by Thriftbooks.com User , 14 years ago
Sabrina Dunsweeney thought she was going to get a month of rest and relaxation when she went to Comico Island to get away from her Ohio teaching job. She never expected to find herself caught between two feuding families. The Tittletots own most of the island. Rolo Wrightly was accused years ago of stealing a neighbor's silver and setting her house on fire. Rolo disappeared never to be heard from again, except for a couple letters to his mother. Sabrina discovers he has recently reappeared on the island. Something not many people know. Not long after she talks to him he is found murdered. The island's police force leaves a lot to be desired, so Sabrina decides to do some sleuthing. Can she figure out who killed Rolo and why without putting herself in danger? I loved this first book in a new series. I've read the author's other series and enjoyed it. I can't wait to read additional books in this series. I found it to be a fast cozy mystery to read. I kept wanting to know what was going to happen next. Sabrina is a complex character that pulls you in from the start. I loved the island setting. I wish it were a real place to visit. I highly recommend this book!

Published by Thriftbooks.com User , 16 years ago
All her life Sabrina Dunsweeney has been under the control of her alcoholic domineering mother who chose her career for her and made it impossible for her to date. After her mother dies she finds a lump in her breast that turns out to be benign. After surviving these two traumas, Sabrina needs some time off to relax and find out who she is. She travels to the small and isolated Comico Island and rents a house from Nellie Wrightly. Her arrival coincides with the election for the President of the Sanitary Concessionary, a political office that often provides a stepping stone to the state senate. Brad Tittletott is running unopposed even after a fire burns down his office and his childhood friend Rollo Wrightley returns to the island for the first time in years. He left after being accused of committing a crime by Brad and his mother. Rollo wants justice for being railroaded fifteen years ago but before he can reveal the secrets that the Tittletotts want to keep hidden, he is murdered. Sabrina, who met and liked him does some investigating independent of the police in the hopes of unearthing a very disturbed killer. ISLAND INTRIGUE is a fascinating amateur sleuth tale written by an author who is loaded with talent. Her ability to describe island life and the residents who live there adds an exotic dimension of depth to a fascinating who done it. Sabrina is a person trying to find herself and while doing so make a place for herself with the islanders who come to consider her a friend. This reviewer looks forward to more mysteries starring this multi-dimensional heroine. Harriet Klausner
Trustpilot
Copyright © 2022 Thriftbooks.com Terms of Use | Privacy Policy | Do Not Sell or Share My Personal Information | Accessibility Statement
ThriftBooks® and the ThriftBooks® logo are registered trademarks of Thrift Books Global, LLC