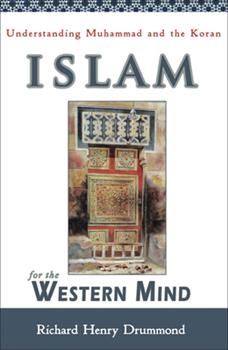 Islam for the Western Mind: Understanding Muhammad and the Koran

More than a billion people consider themselves Muslim. It is the world's second-largest religion. Yet Western portrayals of the Islamic mind are often flawed. Islam for the Western Mind is an intensive look--from a Christian perspective--at what inspires and motivates Muslims, namely Muhammad and the teaching of the Koran. Dr. Drummond, an ordained Presbyterian minister and former professor, presents a balanced look at the life and teaching of Islam's...

Islam for the Western Mind

Published by Thriftbooks.com User , 14 years ago
Islam for the Western Mind is an exploration into the history of Muhammad, the founding of Islam, and the writing of the Koran. Though suitable for those individuals with little or no understanding of these aspects, the author does not dumb down any of the material or make generalizations. Instead, he takes the reader gently though the various topics explaining that indeed there are other interpretations, controversies, and complexities attributed to these circumstances. Not only does this give the reader some basic background knowledge to understand this belief system and its history but also gives them a place to start in further examinations of these and other related subjects. The thing that impressed me most about this book, however, was the author's determined care to show these subjects in as unbiased way as humanly possible. The author understands that as a Presbyterian minister he has the natural inclination to either shout that Christianity holds ultimate beliefs or to illustrate the truths in Islam by noting its similarities to Christianity. I believe that the author did a tremendous job of achieving this objectivity while still managing to keep the information accessible to westerners without any previous knowledge in these areas.

An Honest Look Into Muslim Theology

Published by Thriftbooks.com User , 16 years ago
An excellent introduction to the religion of Islam written from a Christian but unbiased perspective. A linguist and an ordained Presbyterian minister, Dr. Richard Henry Drummond makes an intensive study of the life and influences of Muhammad. Although in his introduction to this book Dr. Drummond does deal with the present socio-political struggles in the Muslim world, and in the final part of the book: "Historical and Theological Evaluation," he discusses post-Muhammad Muslim civilization from the Caliphate up until the dissolution of the Turkish Ottoman Empire after the First World War; he is unlike most other contemporary authors on this subject in that he focuses instead on the theology and ethics Muhammad believed he was delivering to the Arab peoples directly from God. A God which Muhammad stressed was the same God known to the Jews and Christians. Muhammad never claimed to be creating a new religion. Rather he taught that he was the final prophet in a line extending back to Jesus (Drummond devotes an entire section on the special honor Muhammad paid Jesus, calling Him, "the Word and Spirit of God, born of Mary, the Virgin"), Elijah, Solomon, David, Moses and Aaron, Abraham and Ishmael, Noah and Adam. Whereas Dr. Drummond notes the long presence of Jewish and Christian communities in the Arabian Peninsula and the probable influence on a young Muhammad by proto-monotheists known as 'hanifs' who preached in the Hijaz, he stresses what made Muhammad's teachings and the Quran special was its demands for justice for the poor and the outcast, women and orphans (Muhammad was himself an orphan). For example, Muhammad didn't merely preach charity, he made it an obligatory method of worship. Drummond also remarks on the importance and virtue Muhammad found in 'gratitude.' He taught humility and appreciation as reciprocal to the compassion of God and man. Also given in detail is Muslim eschatology. Muhammad put much stress upon the belief and expectation of the Last Day when each and every man and woman shall be brought before God to answer for his or her own life only. Again, what made Muhammad's message different from either the Judaism or Christianity of that time was in his teaching that all who believe in the One God are open to salvation on that Last Day. Richard Henry Drummond's ISLAM FOR THE WESTERN MIND should be considered required reading for anyone wanting to learn about this fascinating religion and its phenomenal founder.

Published by Thriftbooks.com User , 16 years ago
I have known the author and find that all of his writings have a great sense of being able to escape from the pettiness that so often affects religious writings. Muhammad never claimed he was a son of god and in Islamthere is no such thing as original sin, so why have to die on a cross? This is a good read for anyone REALLY wanting to obtain a better understanding of some of the current world events.

Published by Thriftbooks.com User , 16 years ago
Very few those books written by westerners today that have a fair inside look at Islam. One of those few books is this one. the writer seems to be very well versed in the Islamic culture and the Quran. The very apparent difference between this book and others for those who read in the Islamic matter is that the book highlights the experience of spiritual Islam. The book refrains from introducing Islam as a fixed radical mind, an image dominates the western media and mind to the extent that Islam and Muslims are reduced only to violence and enemies of modernity. The book although highly researched in its subject, still at some point lacks clarity and understanding beyond the surface. In the book we find the writer describes Sufism as a movement, while it is something totally different from what the word "movement" might denote or connote. Sufism is a spiritual exegesis in Islamic history that has influenced the way Quran was dealt with, and thus how the Sufism way of looking at the universe was formed. It suffices here to say that Ibn Arabi, a great Muslim Sufi has concluded his spiritual experience with what he calls comprehensive love that is able to embrace all people regardless of anything such as race, religion or any kind of belief. This book is certainly worth reading.
Trustpilot
Copyright © 2022 Thriftbooks.com Terms of Use | Privacy Policy | Do Not Sell My Personal Information | Accessibility Statement
ThriftBooks® and the ThriftBooks® logo are registered trademarks of Thrift Books Global, LLC