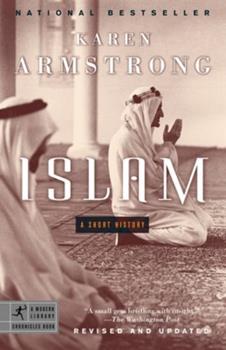 No religion in the modern world is as feared and misunderstood as Islam. It haunts the popular imagination as an extreme faith that promotes terrorism, authoritarian government, female oppression, and civil war. In a vital revision of this narrow view of Islam and a distillation of years of thinking and writing about the subject, Karen Armstrong s short history demonstrates that the world s fastest-growing faith is a much more complex phenomenon than...

Exactly What The Title Promises

Published by Thriftbooks.com User , 15 years ago
I liked this book better than the other reviewer. In conjunction with a Sunday School class in which I participated, I read four books on Islam. Two of them were biased, one in each direction. Armstrong's book is an unbiased, scholarly review of almost 1400 years of Moslem history. While there is some material on beliefs, it is incidental to the emphasis on history. A book of modest length covering 1400 years of history may seem tedious to one who does not like history. If one wants some in-depth discussion of beliefs, this is probably not the right book.

Published by Thriftbooks.com User , 18 years ago
As a Muslim, I was amazed by the deep analysis and the thorough knowledge of Armstrong. It like when someone understands you more than yourself. It inspires me and it's no doubt one of the greatest books I've ever read. Thanks to Kiran Armstrong. I recommend this book to everybody

Published by Thriftbooks.com User , 19 years ago
Karen Armstrong is an unusual woman. She was a nun for a while, early in her life. She teaches in a Jewish educational institution for rabbis. She's won awards from Moslem religious groups for her writings. And she writes and teaches about all three religions. You would expect, from all of this, that a book she writes that's a history of Islam would be good, and full of information. What you wouldn't expect is for it to be in 187 mostly painless pages, easy to read and follow.I feel I should also respond or at least address some of the issues brought up by some of the other reviewers, to explain how I could rate a book so highly when many others didn't. First, of course it's short. The format of the series is short books on essential topics, and the subtitle says it's a short history. Complaining about its brevity in such an instance is tantamount to reviewing a book for not being something it was never intended to be. Second, there seems to be a tendency, especially among Christians, to pan this book because it doesn't show the inferiority of Islam to Christianity. This is a silly critism on several points: first, regarding the religion as inferior would make it hard to write an objective history of it, second, the author isn't a Christian these days anyway, third, the author's whole point is that the religion has evolved over the centuries since its formation, so saying it's one thing is a bit misleading. It's many things. On this same last note, someone criticized the author's supposed double standard in refusing to hold the Muslims in the book to the same moral standards Christians are held to elsewhere in the text. This is misleading, as the passage he was quoting referred to an Arab reaction to something Christians did, not whether that action was regarded as moral by the author. It's hardly the author's fault if Muslims themselves aren't always objective.Islam is the subject of much study recently, given September 11 and the situation surrounding Israel. From what I gather here and elsewhere, there are a lot of misconceptions, caused by people who have either distorted the religion itself, both bigots who misunderstood what they were seeing, and Muslims themselves, justifying the way they choose to run their governments or oppose them. This book spends most of its space discussing how the religion has evolved since Muhammad, and the various doctrinal differences between the groups that worship differently. It's explained in a clear, lucid text that was understandable even to me, an ill-educated military historian who's not too well-versed in religious history in the first place. I feel I gained a great deal from the book, and would recommend it highly to others.

An irreconcilable conflict of ideals and realities?

Published by Thriftbooks.com User , 19 years ago
Armstrong aims to -- and largely succeeds -- in providing a comprehensible succinct outline of the history of the religion of Islam and of political regimes (including a series of empires) that are Muslim. Armstrong covers 1400 years and a substantial part of the world in 187 pages of text. There are a lot of names and dates in the text, supplemented by a 31-page chronology, a nine-page dramatis personae, a four-page glossary of Arabic terms, and a nine-page topical bibliography. Is this too much information for readers unfamiliar with the subject to absorb? Yes. Even someone like me, who knows a fair bit about some parts of the story, can feel overwhelmed at the torrent of names and be tempted to regard the book as a reference to be dipped into rather than read through.However, Armstrong is not just throwing names and dates at the reader. A narrative/analytic thread is quite visible. And the basic, recurring conflict between a radically egalitarian religious mandate and very inegalitarian political/social/economic relations in Muslim societies betraying the vision of the Prophet Muhammed (570-632) is of greater general interest now than it was when she wrote the book. I have a great impatience with those who distinguish Christianity from what Christian institutions have done (Crusades, Inquisitions, etc.) or claim that Marxism has never been tried (i.e., that the communist states of the 20th century weren't "really" putting Marxism into practice). Being sometimes consistent, I think that so many failures of Islamic regimes to produce the kind of society Muhammed envisaged demonstrates its unfeasibility.(I am obviously not a Believer.)I found Armstrong's account of the Mongol incursion particularly acute, that of the reaction to European colonialism a bit pat, but I highly recommend her acute analysis of the tension between what exists purporting to be Islamic and what the Quran says should be. This clash is the leitmotif of this splendid book.

A small door into a vast new world...

Published by Thriftbooks.com User , 20 years ago
It's a pity this book isn't a standard text for secondary school students. The history of Islam is something all Westerners should learn in their teens - and don't. Robinson's book is both a revelation and an indictment of our collective ignorance."Islam, A Short History" is densely written, and sympathetically describes the evolution not only of the Islamic world, but also of the practices and tenets of this major monotheistic religion. Armstrong's tome not only dwells on the history of Islam, but also traces most major currents of thought within Dar al-Islam. She examines the evolution of Sharia (Islamic law), Sufism, the Ismailis, Twelver Shiism, and Wahhabism, just to mention a few of the streams that comprise this river. Best of all, this volume is written in plain English, simply written, incisive when need be, concise if not. Ten maps show the ebb and flow of Islam: The illustrate the early conquests, the growth of the Umayyad Empire, the disintegration of the Abbasid Empire, the extent of the Seljuk Empire, the geography of the Middle Eastern Crusader states (in the 12th century), the threatening Mongol world in the 13th century, The Safavid Empire, the Moghul Empire in India, and the Ottoman Empire. The amirs, caliphs, ulamas, qadis (judges), and a host of other political, military, administrative, and religious figures are examined and put into their historical contexts. "Islam, A Short History" contains a first-class 275-entry (!) chronology, a listing of 118 historical figures (!) from the history of Islam, a VERY exhaustive listing of additional readings (bibliography), and a good index. (The only weak point is a somewhat truncated glossary of Arabic terms.) Of the many books I have read about Islam, this is the one I would recommend as the first to read - it is a the perfect introduction to a fascinating (and almost unknown) new world.
Copyright © 2020 Thriftbooks.com Terms of Use | Privacy Policy | Do Not Sell My Personal Information | Accessibility Statement
ThriftBooks® and the ThriftBooks® logo are registered trademarks of Thrift Books Global, LLC