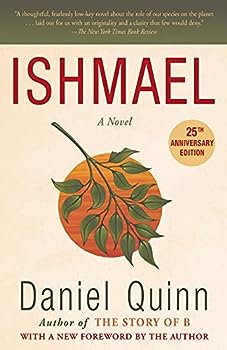 (Book #1 in the Ishmael Series)

This description may be from another edition of this product. One of the most beloved and bestselling novels of spiritual adventure ever published, Ishmael has earned a passionate following among readers and critics alike. This special twenty-fifth anniversary...

One of my favorite books I've ever read.

Published by CJW , 1 year ago
I don't want to give anything away, but know that reading this book scratches an intellectual itch that you may not even realize you had. It's so well thought out and provides an excellent framework for shifting how you think about certain things. Everyone should read this!

Published by Thriftbooks.com User , 16 years ago
Yes, the philosophy behind Ishmael is a simple one. Yes, the writing is basic, slowly paced, sometimes repetitive, and barely backed up by any data. Yes, many of us have encountered similar beliefs elsewhere, or we came up with them ourselves in high school. A few people have said this, and I'd like to reiterate: in the end, it doesn't matter. It's an important book. I'm amazed at how many people have sneered at this book, dismissing it by saying, "Everyone already knows this, idiots." Do they really? Maybe they did discover it for themselves in high school, but many of those people (myself included), thought that we were alone in thinking the way we did, or listened to Mother Culture's insistence that human "progress" was inexorable. This book is a reassuring reminder that many of us humans do know how to live, and that minds are being changed. Granted, I wouldn't recommend that anyone's education be based solely off Ishmael. Read it, and then go out and keep reading. You want evidence? It's out there, being written by scholars with more scientific credibility than Daniel Quinn. Check out his website at www.ishmael.com if you want to know what he recommends for additional reading, or just go out and explore on your own. To those critics who claim to "already know" everything in this book: do you really? If so, why are you spending so much time trying to discredit it? A key part of the book, perhaps THE key part, is that this knowledge does no good if it isn't shared. So you've studied the works of great philosophers and noted ecologists? Good! I am genuinely glad. But if you really buy into the ideas presented in this book, then help to teach them instead of cynically blasting Quinn's approach. He may not help everyone, but he helped me, and I know I'm not alone. I would also be suspicious of any reviews which claim that the book promotes the ideas that humanity is "bad" or "a virus", that the book is racist, anti-semetic, anti-christian, or anything of the sort, that the book is anti-technology, or that the book promotes the idea that we have to return to a hunter-gatherer lifestyle. Quinn takes pains to distance himself from all these criticisms, and those who make them need to read a little more carefully. Since this is supposed to be a review (not a review of other people's reviews), I highly recommend this book. Though it may not be for everyone, I encourage anyone with even the slightest interest to give Ishmael a shot. If you're skeptical, try a friend or a library, but I'm confident that many of you will want this on your shelves for years to come.

Ishmael: A Critical Analysis of Civilization

Published by Thriftbooks.com User , 19 years ago
It is a general rule that any particular culture can only be understood by someone outside of it - a neutral observer, unaffected by prejudice or indoctrination. This is the reasoning behind Quinn's choice of a gorilla named Ishmael as the main character of this novel, who conducts a series of dialogues analyzing the whole of civilization itself.But what is the civilization that Quinn looks at? Instead of muttering about monumental building and written language, Quinn treats civilization in a method that is becoming increasingly popular: as the result of a critical mass of humanity that makes possible rapid advances in knowledge and science. For this to be possible, intensive agriculture must be used to raise the population density to such a point that civilization occurs.So Quinn uses a gorilla as an outsider looking in and perceiving the reality of civilization - of cultures using intensive agriculture to dominate the world. His conclusions are for the most part negative: he concludes that civilization is not sustainable in the long term (that is, over millions of years). The observations used to come to this conclusion are relatively well-known; that civilization is the greatest disaster to befall earth in the past 65 million years. In terms of pollution, deforestation, extinction, and overall negative impact to the web of life itself, humanity is supreme among all the species. What Quinn does not share with the others who know these facts is a belief that civilization will overcome any difficulties it encounters. Civilization, to Quinn, is the problem, not the solution._Ishmael_ is the presentation of these ideas in a Socratic method from a gorilla to a man "with an earnest desire to save the world." There isn't really any plot to this book, nor does Quinn intend there to be. The disappearance of Ishmael at the end of book is the only story-like element in _Ishmael_, and it is really an attempt by Quinn to set the reader free - to encourage him/her to think about civilization for himself rather than be told about it by a telepathic gorilla. I've always had the feeling that this should be considered nonfiction, rather than a story.The problem presented by _Ishmael_ is simple: civilization is the problem. The solution is both simple and complex: in order to preserve a human niche in the ecosystem, we must go beyond civilization. Working to figure out just what this means is one of the great joys of reading _Ishmael_, whether or not you agree with Quinn's assessment of the situation. _Ishmael_ is a book that will make you look around and think, and perhaps reach some conclusions that you may find surprising. Highly recommended.

Book for Reraders with an Earnest Desire to Save the World

Published by Thriftbooks.com User , 21 years ago
A friend of mine recommended this book to me in 1992. When she described to me the book's premise, a dialogue between a telepathic gorilla and a not-so-subtly dense man, I have to admit, I was not exactly eager to buy a copy. Thankfully, she persisted, and when finally she just presented me with a copy of it, I began to read... and read... and read... to find that she was right when she told me that what the book is actually about is something you have to read for yourself to discover.My history prior to reading Ishmael had involved efforts to address problems regarding the environment and social justice. I had always been frustrated at the conventional devices for change, never quite able to communicate exactly where my frustrations lay. I did know that my frustrations were rooted in a sense that what I was doing was having little more effect than trying to stop a dam from breaking by stopping up the cracks with tissue paper. I also knew that the changes needed were much more than any amount of political persuasion, noble savage idealism, scientific sequestering, philosophical masturbation, or religious transcendentalism could possibly produce. It has been seven years since my first reading of Ishmael, and this book's profound impact on me, my goals, and my overall cosmology has not wavered since, but has in fact increased exponentially, particularly with reading Mr. Quinn's follow up pieces, The Story of B and My Ishmael. In Ishmael, Daniel Quinn manages to cut to the heart of our culture's various ailments without resorting to any of the expected conventions of our time. The reason for this, as Mr. Quinn clearly illustrates, is that these conventions are as much a result of our culture's ill paradigms as the problems they occasionally attempt to remedy.But this does not even begin to touch on the depth of insights contained in this masterful work. Mr. Quinn synthesizes numerous schools of thought - primarily anthropology, history, biology, and theology - in such a way as to paint a truly all-encompassing portrait of how we got here. Most importantly, he successfully fleshes out the root of what it will take for any significant and lasting change to be made. The premise of the conversation between man and ape is more a metaphorical framework, a vehicle for the eye-opening ideas therein, than a device to provoke an emotional response. Nonetheless, one cannot help feeling a sense of loyalty and affection for the humorously smug (and rightly so) gorilla we come to know as Ishmael.And we owe a debt of gratitude to the book's fictitious narrator. His dense skull need not be taken personally as an estimation on Quinn's part of the mentality of his readers. It is a practical device that makes this book comprehensible to even those readers with little prior understanding of the laws of biology, the principles of evolution, or the various other foundations of this piece, and merely requests the patience of those readers who do have knowledge of such sub
Copyright © 2020 Thriftbooks.com Terms of Use | Privacy Policy | Do Not Sell My Personal Information | Accessibility Statement
ThriftBooks® and the ThriftBooks® logo are registered trademarks of Thrift Books Global, LLC