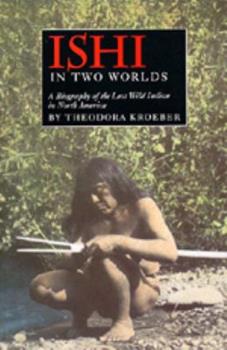 Ishi in Two Worlds: A Biography of the Last Wild Indian in North America

OVER ONE MILLION COPIES SOLD The life story of Ishi, the Yahi Indian, lone survivor of a doomed tribe, is unique in the annals of North American anthropology. For more than forty years, Theodora Kroeber's biography has been sharing this tragic and absorbing drama with readers all over the world. Ishi stumbled into the twentieth century on the morning of August 29, 1911, when, desperate with hunger and with terror of the white murderers of his family,...

Published by Thriftbooks.com User , 19 years ago
This book is one of two I routinely give to people who move to northern California. The other one is The Ohlone Way, by Malcolm Margolin. Ishi was the lone survivor of a doomed tribe of Yahi Indians on the slopes of Mt. Lassen. Other members of his tribe were murdered by a planned campaign of genocide during the settling of the West. When Ishi stumbled out of the hills of his birth in 1911, he landed in the 20th Century, huddled in the corner of a cattle corral on a ranch, dressed in rags, starving, desperately lonely, and probably certain he would be killed. Instead, a wise sheriff in Oroville called on some anthropologists from Univ of CA in Berkeley, and Ishi eventually came under the benevolent but somewhat demeaning (he was made the centerpiece of a museum exhibit) protection of Alfred Kroeber. It is Kroeber's wife who wrote this touching, heartwarming, illuminating and ultimately tragic history of Ishi's life in the 'modern' world.Most moving for me was a long middle section that recounted a magical summer when Ishi took Kroeber and his teenage son back to Mt. Lassen and showed them his native territory. They lived together as unspoiled and free Native Americans for the summer, hunting deer, swimming in cold streams, living in huts and caves, building fires, making bows and arrows... An experience that was destined never to be repeated.Wonderful archival photographs supplement the imminently readable text.Don't miss this very special and quintessentially Californian piece of history. But there's no rush: this book is destined to remain in print forever.

Published by Thriftbooks.com User , 19 years ago
This was one of the most fascinating and thought provoking books I have ever read. It is a beautifully written book that brings with it an entire range of emotions from rage and disgust, to hope and forgiveness. I thought that the best part about this book was the look into Ishi's Yahi and Yana culture, and its overview of California indian tribes in general. The myth that the Californian indians were a simple and childlike race subsisting on what they could dig from the ground is thoroughly debunked by this book.California's varied geography produced one of the most culturally diverse places on planet earth prior to white settlement. Interestingly, this belief that California is made up of many sub-states still exists, and books have been written about the various regional differences within California. The same was true for the aboriginal tribes, and Kroeber brings amazing facts to light about this. According to Kroeber, California was made up of 250 distinct tribes, many with their own languages, culture, and customs. Of the six super-languauge groups of North American Indians, 5 were represented in California. According to best estimates, these five language groups divided themselves into 113 distict spoken languages. Only Sudan and New Guinea have comparable cultural and linguistic diversity. One fact that floored me was that the Yahi language was bifurcated between a male and female dialect. Males and females used these dialects when they were in groups of their own sex. When a male reached puberty, he was taken from the care of his mother and other women, and lived in almost an exclusively male world were he learned the male dialect and hunting skills. Kroeber opens the book with this linguistic/cultural look at California indian culture just prior to white migration, and goes into great detail about Ishi's tribal culture in particular. (We even get a lesson on the term "glottochronology" which is the study of the roots of a particular language). About a third of the book is this background, and I found it to be absolutely fascinating. The book also spends considerable time on the extermination of the Northern California indians and Ishi's tribe in particular. Of course, these accounts are horrible and no less disturbing than accounts of the Jewish holocaust. The indians were seen as varmits, and they were exterminated with the same attitude that the wolves, grizzlies, and other unwanted wildlife were exterminated. Of course, this was not the attitude of all whites, but not enough of them stood up to stop the carnage.Beyond the stories of human slaughter, racism and genocide, the greatest tragedy was that cultures, which existed with amazing complexity and richness for centuries, were obliterated and replaced with a white mono-culture within 15 - 20 years. The last third of the book deals with Ishi's discovery and how he lived his remaining days under the care of the authors husband, an anthropologist at UC Berkeley. The relationship betwe

Published by Thriftbooks.com User , 20 years ago
This book tells a true story of a common science fiction theme, How would a Stone Age person acclimate himself to modern civilization, if suddenly transported there. Ishi was the last remnant of a California hunter-gatherer tribe. He was starving and near death when discovered by a California rancher. Thus began his journey from primitive beginnings, to journalistic sensation, to scientific curiosity, and finally as a working member of society in the California of the 1920's. and `30's. As the subject of scientific study, Ishi shows that basically people everywhere and for all time are the same, but it is the differences that of course makes it interesting. One example is that at first anthropologists thought Ishi could not count above the number ten. It was later found that he saw no reason to count abstractly. He had a numbering system that extended quite high when physical objects were present. One of the most shocking revelations for Ishi, were not the buildings, cars, trains or machinery of modern life, but the number of people that existed. This is a man who had never seen a crowd of people, he had watched his remote lingering tribe-members die off when he was a child . A hunter-gather lifestyle can only support a sparse population. From Ishi's perspective the largest crowd and perhaps the world consisted of those fifty tribe members when he was a young boy. The book gives a humorous account of Ishi's shock of seeing a crowded San Francisco Beach on a hot summer day. The book is very well written, an easy read and very entertaining. It is surprising that this book is not more popular.

Published by Thriftbooks.com User , 23 years ago
I've read this excellent book three times now, and each time it is rewarding. My family has vacationed near the area where Ishi walked out of the woods, and his story became even more real and more tragic to me when I saw the beautiful land that his people lost. Kroeber has provided an important last glimpse of a Native American living in the old way. In addition to the obvious issue of our decimation of indigenous peoples, the book also raises important questions about the treatment given Ishi when he came to live in white culture.

Published by Thriftbooks.com User , 24 years ago
Imagine this: it's the 20th century, we have electricity, movies, telephones, trains, cars, the latest audio recording devices, indoor plumbing, and access to the usual luxuries and amenities of our western world. Then one day - here in the United States, out of our own country - a man appears out of the wilderness, almost magically transferred from the stone age to the steel age. Truth is said to be stranger than fiction, and the story of Ishi is one such example. Ishi was the last of the Yahi Indians, living in Northern California under a cloak of fear, secrecy, and evasion from white men, carrying on this lifestyle for the better part of four decades. In this thoroughly researched book, Theodora Kroeber tells Ishi's story. She covers the historical and geographical background of the Yahi Indians, how their lives began to change and their numbers decimated with the coming of the caucasions in the mid- 19th century, and how Ishi and the few remaining people of his tribe lived until Ishi was the last one left. She then tells us about the man himself, the last (happy) five years of his life in San Francisco, and the adjustments and learning Ishi went through in his new home. The author does a superb job of comparing and contrasting Ishi's stone age world with the steel age world, without the tedious prose often involved in such writing. This book is highly readable and strongly recommended.
Trustpilot
Copyright © 2022 Thriftbooks.com Terms of Use | Privacy Policy | Do Not Sell or Share My Personal Information | Accessibility Statement
ThriftBooks® and the ThriftBooks® logo are registered trademarks of Thrift Books Global, LLC