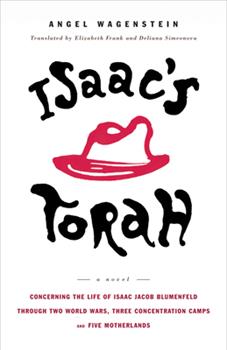 This novel is the saga in five parts of Isaac Jacob Blumenfeld, who grows up in Kolodetz, a small town near Lvov, which, when he's a boy, belongs to the Hapsburg Empire, but which subsequently belongs to Poland, Soviet Russia, Germany, and then Russia again. Isaac survives the absurdity and horror of Eastern Europe during the 20th century by pretending to be a fool. If this is an old Jewish art, then Isaac is a consummate artist. He plays the fool...

Published by Thriftbooks.com User , 13 years ago
Anyone who has an interest in the events of WWII will be fascinated by this novel. Although it is a novel, there are very close ties to actual events on the Eastern front of the war. Most Americans have little knowledge of this theatre of operations and it should prove to be illuminating on what actually happened. It is written as a diary of an individual experiencing first hand the treatment of civilians by the Nazis and then the Russians. One has to decide which one was worst.

Published by Thriftbooks.com User , 13 years ago
Unlike anything I have read before. Isaac's Torah will engross you visually and emotionally in the story. At times I felt as if I was watching a movie of the main character. That is how well I was or you will be able to translate the words into imagery. I really felt as if I was there in the scenes. The sadness and horror of the Holocaust seen as a comedy and tragedy. You have to read this.

Published by Thriftbooks.com User , 14 years ago
The name of Angel Wagenstein's novel, Isaac's Torah, reflects a five part division of Isaac Jacob Blumenfeld's life, corresponding in number to the five books of the Torah. A simple tailor, Isaac fights in the Austro-Hungarian Army in World War I, comes home to find out that his town, Kolodetz, is now Polish, not Austrian, and marries the love of his life, Sarah. When the Germans and the Russians create a new partition of Poland in 1939, Kolodetz becomes Russian and then German as the Nazi troops attack the Soviet Union. Sarah and his three children are on the way to a spa when the Germans change the destination to Auschwitz. Isaac himself is swept into a concentration camp, but he manages to survive and return to Vienna after liberation. He's in the Russian sector of Vienna, is denounced and sent to a labor camp in Siberia. Throughout all these trials and tribulations, Isaac inserts jokes and humorous stories into his narrative. Wagenstein has recreated the humor and warmth of Sholem Aleichem and I. B. Singer in a fresh and vibrant way. Isaac survives all the crises of his life by playing the fool. His rabbi, Shmuel Ben-David, appears in nearly all the episodes of his life to give counsel and encouragement. The book epitomizes the Jewish saying, "It could be worse," even when the circumstances leave little room to get worse. Reading this novel is an uplifting experience, a celebration of the beauty and joy of living even when it hurts.

Comedy that includes the Holocaust

Published by Thriftbooks.com User , 14 years ago
The first novel by Bulgarian screenwriter Angel Wagenstein, originally published in Sofia in 2000 when he was 78, "Isaac's Torah" celebrates the "Golden Tradition" of Eastern European Jewry by collecting Jewish jokes and inventing occasions to retell them. My favorite comes early: "Two Jews from two towns are arguing over whose rabbi is more capable of performing miracles. "'Ours, of course, and I will prove it to you,' says the first one. 'Last Shabbos our rabbi was going to synagogue when suddenly rain came pouring down from the sky. Not that the rabbi didn't have an umbrella, but on Shabbos any kind of work is forbidden--so how can he open it? He looked up to the sky, God immediately understood, and there was a miracle, you won't believe it: on the left side--rain, on the right side--rain, and in the middle--a dry corridor all the way down to the synagogue. What do you say to that?' "'What I say, of course, is listen to this! Last Shabbos, our rabbi was coming home after prayer and what did he see? Lying on the road was a hundred-dollar bill! Well, how could he take it, when it's a sin to touch money? He looked up at the sky, God immediately understood him, and there was a miracle: on the left side--Shabbos, on the right side--Shabbos, and in the middle, you won't believe it--Thursday!'" (p. 21) Isaac Jacob Blumenfeld, the hero of Wagenstein's two-decade picaresque, tells jokes to reattach himself to a lost world. The book's humor is not an expression of hostility, but of gentle and thwarted affection. Like a little boy collecting "treasure" on a playground, a novelist succeeds in recreating a world by picking up and arranging the smallest details of that world. Wagenstein is perhaps the first Jewish novelist to understand that jokes were as indispensable to Eastern European Jewry as kosher butchers, marriage canopies, and the muddy streets of shtetlakh. The jokes vindicate the tenderness that most Jews now experience when they reflect upon the lost world. Let's be honest. Much fiction that looks backward upon Jewish life in Eastern Europe is fatally infected with nostalgia and cheerlessness. The Holocaust throws its shadow over an entire literature. Wagenstein undertakes the more difficult thing--writing fond comedy that includes the Holocaust. Unlike Roberto Benigni's 1997 film "Vita è bella," the novel does not misrepresent the reality of the Konzentrationlagers, does not underplay the real danger and real violence and real death, does not reduce the mass of Jews caught in Hitler's net to a faceless and nameless background, in order to get a few cheap laughs. For Isaac Blumenfeld, comedy is first of all an act of resistance, even defiance, in the service of survival. The novel's title points to its structure. Like Moses's, "Isaac's Torah" is divided into five books. In the First Book, Isaac introduces himself as a tailor's son in Kolodetz, a fictional Galician shtetl in what is now the Ukraine. The Second Book

Beautifully written book about the Holocaust.

Published by Thriftbooks.com User , 14 years ago
According to the biography of the author, Angel Wagenstein was born in 1922, making him 86 years old. This is his second novel published in English, though he has been a noted film maker and screenwriter in Bulgaria since the end of the Second World War. I read (and reviewed) his first novel, Farewell Shanghai, earlier this year. I mention this because I continue to be astounded by Mr Wagenstein's writing, and the translation from the original Bulgarian by Elizabeth Frank and Deliana Simeonova. Isaac's Torah is the story of Isaac Jacob Blumenfeld, who was born in that strange geographical area in eastern Europe that changed governments many times in Isaac's long life. His village, populated by Jews and Poles and Ukrainians, was Austro-Hungarian in his early years, Polish in his middle years (after WW1) and then Soviet, German, and Russian again in his later years. (He actually ends his life in Vienna). Isaac recounts his long life in a letter to his biographer. He writes about his family - lost in the Holocaust - and the villagers he grew up with, as well as the many acquaintances he made in the various armies, concentration camps (both German and Soviet), hospitals and refugee camps he lived through. The two constants in Isaac's life were his brother-in-law, Rabbi Shmeul Ben-David and his own sense of humor. The good Rabbi appears here and there in Isaac's life after both are separated during the German invasion of Soviet Poland in 1941, always providing Isaac with the love and grounding he needs to survive in those perilous times. The two are separated for good after meeting in a Soviet Gulag in the late '40's. This novel is so beautifully written (and translated) that even the grim and very sad parts are, in the end, uplifting. I think that because Isaac was able to always see the little bit of humor in his circumstances that made his survival easier, the reader can, too. I really think this book is a masterpiece of Holocaust literature.
Trustpilot
Copyright © 2022 Thriftbooks.com Terms of Use | Privacy Policy | Do Not Sell My Personal Information | Cookie Preferences | Accessibility Statement
ThriftBooks® and the ThriftBooks® logo are registered trademarks of Thrift Books Global, LLC