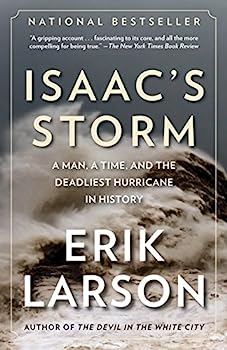 Isaac's Storm: A Man, a Time, and the Deadliest Hurricane in History

From the bestselling author of The Devil in the White City , here is the true story of the deadliest hurricane in history. National Bestseller September 8, 1900, began innocently in the seaside town... This description may be from another edition of this product.

Great story and it's true

Published by jim v , 3 months ago
I'm not going to write about the story itself, so many have already done that. I am going to talk about Larson's style. His books, while about real happenings, read like novels. So many historians have such a dry style they are almost unreadable by the average reader. Larsons style is readable and understandable by just about anyone. I highly recommend any of his books. Two of my favorites are, "Isaac's Storm," and "Devil In The White City."

Published by Dansedufeu , 1 year ago
I noticed at lease one review that mentioned a "slow start". Larson is a master at leading the reader from page to page with words that build up to "the whole point". He grasps the essentials of how weather, and it's effects, actually happen. In the early stages, no one seems to sense any danger. Life goes on, kids play, housework is done. Then, as if all at once, the reader turns a page and is among swirling masses of bodies, houses, livestock, and Nature's wrath. The book is more than a story about a storm, it's also a commentary on human nature.

A book to read if you are a science and history fanatic.

Published by Asma , 1 year ago
This book in my opinion is okay, not good or bad. The beginning starts off to a very somnolent start. The entirety of the beginning focuses on the history and science behind storms. Larson continuously jumps from one claim to another without any organization. This leaves the reader absolutely confused. He continuously inserts facts and claims that have nothing to do with the story line and are not relevant at all. He jumps from one idea to another constantly with a lack of good transitions which are very important in helping readers understand the time line of the story. Lastly, I don't think Larson made this book as impersonal as he should have, there is constant negative portrayal of certain characters, but this book should be telling the facts of the storm not Larson's opinions. Despite these issues the book does become very interesting near the end. As soon as Larson begins to describe the storm and the after math I could not put down the book. His detailed explanation pulls the readers in. Therefore although the book starts off dull and uninteresting, the interesting nature of the storm makes up for it. Again if science and history really intrigue you, it is a good read, however if not this may be a boring read for you.

Published by Thriftbooks.com User , 22 years ago
What a great story! This book just raced along full of facts and interesting detail about "a man, a time, and the deadliest hurricane in history." I must admit that when this book was first released in Australia I wasn't overly interested. It didn't sound like something that would interest me in the slightest. How wrong can you be, after picking the book up for the third or fourth time and actually taking the time to see what the story was about I had to read it. The author, Erik Larson, presents a gripping and terrible account of the events leading up to the destruction on Galveston on the 8th of September 1900 by one of the deadliest hurricanes in America's history. Along the way the Larson provides details of man's efforts to predict and control the weather and the often-disastrous results when we got it wrong! The personal accounts offered in this book are often very touching and the human drama really gets you involved in the story. The narrative moves along like an action paced novel and you find yourself up in the early hours of the morning glued to the pages. I really didn't want this story to finish, it was a great account and the only fault I could find was a lack of photographs. On a number of occasions Larson refers to old black and white photographs that he had seen during his research for this book, it would have been nice to share these with his audience. Overall this is a great book and well worth the time to read.

An Eerie and Powerful description of a Natural Disaster

Published by Thriftbooks.com User , 22 years ago
Are there other folks out there who enjoy reading true accounts of someone else's misfortune, especially if that misfortunate involves a titanic, unstoppable force of nature? A few, really good examples of this true-life disaster genre that I've read over the years are: "The Earth Shook - The Sky Burned" (San Francisco Earthquake)"; "The Coming Plague" (newly emerging diseases); "Great Lakes Shipwrecks and Survivals" (doomed on Lake Superior, etc.); "Rats, Lice, and History" (a biography of typhus); and "Isaac's Storm" (the Galveston hurricane of 1900).Erik Larson's book on the deadliest hurricane in history has two main focal points: the hurricane itself; and the human drama of Isaac Cline, the Galveston meteorologist who failed to predict the intensity of the storm. The book meanders through occasional dry stretches of Isaac's pre-storm biography, and through the history of the U.S. Weather Bureau (they were interesting, but not nearly as interesting as the storm), but once it focuses on the events of September 8, 1900 and beyond, I wasn't able to set "Isaac's Storm" down. Especially compelling are the eerie descriptions of what it's like to sail through the eye of a hurricane, and of course the narrative (from the viewpoints of several survivors) of what it was like to be in Galveston before, during, and after the storm. If you are afraid of storms or of water, you might not want to read this book because Erik Larson puts you right there when the storm debris is caving in the side of your house, or when the "tide suddenly rises fully four feet at one bound".

Breakers of the heart

Published by Thriftbooks.com User , 22 years ago
It is hard to explain the shear power of water and wind unless you have experienced it. This book is amazing with the descriptions, both scientific and emotional, of the human event of attempting to survive the storm. What is truly powerful is the heartache that was not written into the book. It didn't need to be. There are moments in the book where nothing is written and you are left to think. Those are the moments you look up from the book, stare out into the space in front of you, and you wonder if you would have done the same thing. I found my heart at a lost. I felt the grief. The book didn't describe it, but led you to it. What dumbfounded myself when I finished the book was that I chose to read it for purely scientific reasons and I found I read a real human drama. An excellent piece of work that will reach the hearts of all who read it.

Published by Thriftbooks.com User , 22 years ago
I went in to work sleepy-eyed quite a few mornings because I'm a slow reader and did not want to put this one down. It's a very clever combination of distilled eye-witness accounts, scientific and historical fact, memoirs and conjecture. I did not find the lack of photographs to be a problem, because the author portrays images wonderfully with words. The narrative builds gradually, like a good suspense novel; in the end, the horror of the event is very much evident in the narrative and the memories of those who survived the hurricane of 1900. The story has essentially the same fascination as that of the Titanic. Disaster occurred, and much of it could have been averted had human beings behaved differently. The difference is that this story has not been told repeatedly and does not focus on prominent citizens of the nation. Isaac's Storm, in the right hands, would make a terrific movie. In many ways, this books succeeds in taking the reader back to the year 1900. History at its best.
Trustpilot
Copyright © 2022 Thriftbooks.com Terms of Use | Privacy Policy | Do Not Sell or Share My Personal Information | Accessibility Statement
ThriftBooks® and the ThriftBooks® logo are registered trademarks of Thrift Books Global, LLC