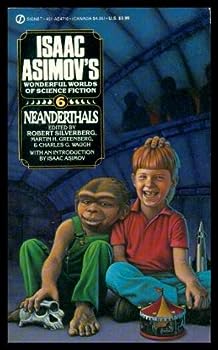 (from back of book) From a child snatched out of a distant past to a prehistoric spaceship crash to a man who can cast his mind back in time, here are twelve provocative tales of the "different... This description may be from another edition of this product.

Published by Thriftbooks.com User , 14 years ago
An anthology with a science fictional take on various characters with more than human abilities. A pretty good bunch of stories, too, averaging 3.54. Supermen : 01 Angel Dark Angel - Roger Zelazny Supermen : 02 Worlds to Kill - Harlan Ellison Supermen : 03 In the Bone - Gordon R. Dickson Supermen : 04 What Rough Beast? - Damon Knight Supermen : 05 Death by Ecstasy [The Organleggers; Gil Hamilton] - Larry Niven Supermen : 06 Un-Man - Poul Anderson Supermen : 07 Muse - Dean R. Koontz Supermen : 08 Resurrection [The Monster] - A. E. Van Vogt Supermen : 09 Pseudopath - Philip E. High Supermen : 10 After the Myths Went Home - Robert Silverberg Supermen : 11 Before the Talent Dies - Henry Slesar Supermen : 12 Brood World Barbarian - Perry A. Chapdelaine Agents of 'Death', chosen for exception physical abilities and then enhanced and given cool toys. They also get two coffee breaks a day. 4 out of 5 Planet destroying is a lonely job, and everybody hates you. 3.5 out of 5 No powersuit means a few problems. 3 out of 5 Can't cure everything. 3 out of 5 Hamilton investigates the death of someone who knows. It seems that he has died of wirehead overdose, but Gil doesn't believe it and check sit out. 3 out of 5 "The world was too chaotic and violent--it still is--for anything less than a brotherhood of supermen." 4 out of 5 A muso needs his writer, dad, you moron, even if he is a slug! 4 out of 5 Dead race destruction discovery toasting. 3 out of 5 A man really good at the body language thing has a plan to bring down a criminally run government and associated organised crime. 3.5 out of 5 Don't really need you supernatural good types any more. 3.5 out of 5 A mutant with telepathy and chamelon powers tries to ensure a succession. 3.5 out of 5 A gladiator champion escapes and wants to bump off the ruler of the planet where he was used for entertainment, multi-planet escape and capture sequence ensues. 4 out of 5

Published by Thriftbooks.com User , 21 years ago
Supermen (Isaac Asimov's Wonderful Worlds of Science Fiction #3). The unique and sometimes powerful stories included in this multi-authored collection of short stories are, as the title suggests, tales of men that could be considered to be supermen. This anthology contains a number of good stories and some excellent ones about human beings that are in some way superior to ourselves. There are 12 tales from some of todays better known science fiction writers.'What Rough Beast' by Damon Knight is an excellent story about a man who can twist time and events. He can create wealth, heal the sick, and change the world in an infinite number of ways. This was a very entertaining story with an intriguing concept.'Worlds To Kill' by Harlan Ellison is a very good story about a man who destroys entire worlds for a living.'In The Bone' by Gordon R. Dickson tells the intriguing tale of one man searching for new worlds and equipped with the best technology that man can provide. He begins to feel godlike until he meets a technology just little better.Larry Niven, Poul Anderson, Dean R. Koontz, A. E. van Vogt, Roger Zelazny and Robert Silverberg are some of the other writers that contributed to this above average collection of short stories. I first bought this collection back in the eighties. It sat, for some unknown reason, on my bookshelf collecting dust. Finally, craving some short science fiction stories, I read this book. I found it to be a very enjoyable book. Like any short story collection certain stories are better than others. However, there are enough varied ideas and concepts that everyone should find something that they like in this book.
Trustpilot
Copyright © 2022 Thriftbooks.com Terms of Use | Privacy Policy | Do Not Sell My Personal Information | Accessibility Statement
ThriftBooks® and the ThriftBooks® logo are registered trademarks of Thrift Books Global, LLC