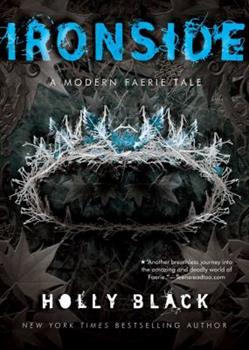 In the realm of Faerie, the time has come for Roiben's coronation. Uneasy in the midst of the malevolent Unseelie Court, pixie Kaye is sure of only one thing -- her love for Roiben. But when Kaye, drunk on faerie wine, declares herself to Roiben, he sends her on a seemingly impossible quest. Now Kaye can't see or speak to Roiben unless she can find the one thing she knows doesn't exist: a faerie who can tell a lie. Miserable and convinced she belongs...

Published by Thriftbooks.com User , 12 years ago
Kaye Fierch knows by now that she's not human. She knows she's a pixie. She knows she's a changeling. She knows she's not her mom's kid. She knows she's in love with Roiben, the King of the Unseelie Court (Unholy Court in English, but what can you do, love is love, right?), and she's pretty sure he loves her back. Unfortunately, she's not sure of much else. Growing up's tough however you look at it, but when you're a solitary faerie girl who thought you were human until a few weeks ago, it gets that much harder. Not to mention your boyfriend's king of the evil faeries. Oh, don't forget, many of the other faeries, both evil and good, want to kill you. Add in the fact that you were responsible for the death of you childhood best friend, and are now doing what you can to take care of her gay brother, while your childish mother continues her unsuccessful attempts to rock stardom, you can sort of see the scope of Kaye's problems. It's pretty bad. And it gets much worse: while celebrating Roiben's coronation, she gets drunk. Forgetting everything he has told her--chief among it, that he loves her, and that he wants her as separate from the Courts as she can get--she declares herself to him, i.e., promises to perform any quest for the honor of being Roiben's consort--as tangled up in creepy faerie politics as you can get, in other words. She won't be able to see him until she completes her quest. If she doesn't complete it, she will never be allowed to see Roiben again. Roiben sets her an impossible task. Heartbroken, Kaye is cut off from her love and what she wanted to be her world. Basically, she's got to take care of her gay friend Corny (almost as childish as her mother) all the while trying to survive in a world never meant for faeries. Her relationship with Corny deepens; they're basically best friends by this point. Kaye doesn't resign herself to a human existence, but she accepts, for the moment at least, that she totally blew it. She starts scheming how to see Roiben again, all the while wondering if she wants to--he set her an impossible task, which must mean he's sick of her, tired of her, beleives her unworthy of him. Being who she is, she's torn between reuniting with him somehow, and tracking him down to kick his butt for doing this to her. Kaye, however, cannot let go of Roiben or the faerie realm so easily. And, fortuitously enough, before long the faerie and human realms are in extreme danger again; the courts are warring yet again; and Kaye gets stuck in the middle yet again. This puts her in the perfect position to try and save the world--both from Silarial, the Queen of the Seelie Court, and her own Roiben, King of the Unseelie. Admirably throwing her crushed feelings to the side during her attempts to save everything, Kaye jumps into the fray as soon as she can, at first siding with Silarial to destroy Roiben's Court, which, Kaye believes, due to erroneous information supplied from a world with which she is no longer in to

Published by Thriftbooks.com User , 14 years ago
This is a wonderful book. Black's prose is like poetry and her plotting is both tight and graceful. You really need to have read, at least, the first book to fully understand what is happening. But Tithe, Valiant and Ironside are wonderful books and you won't be disappointed.

Published by Thriftbooks.com User , 14 years ago
"Ironside", the third Modern Faery's Tale by Holly Black, is the best of the series so far. Black writes beautifully and she manages to set up very evocative quotes from classic authors to set the scenes for each chapter. "Ironside" takes up a bit after "Tithe" and "Valiant". Roiben's coronation for the Unseelie Court is scheduled. Kaye realizes if she is to claim her love, she must declare for him and accept the quest he gives her to prove her love. Meanwhile, Kaye also tells her Mother who she is and must restore the human child whose place she took to their home. Favorite characters from both of the prior two series are back. It was delightful to see the casts of both these tales merge. One thing Black does very well is create characters that you want to know more about. Black's writing is also tighter. She pulls you in and doesn't let you go til the tale is over. Black's work is very well done--some of the best new fantasy in both the young adult and the adult genres.

Published by Thriftbooks.com User , 14 years ago
I have been looking forward to this book ever since I finished Tithe: A Modern Faerie Tale, and Holly Black most definitely does not disappoint. IRONSIDE picks up soon after the events in Tithe: A Modern Faerie Tale and Valiant: A Modern Tale of Faerie, and takes the reader on another breathless journey into the amazing and deadly world of Faerie. Things have been uneasy ever since Roiben assumed the throne of the Unseelie Court, and with the threat of war in the air and Roiben's coronation drawing near, everyone is on edge. Changeling Kaye Fierch knows that she loves Roiben, but she feels increasingly unwelcome and out of place in the Unseelie Court. So the night of the coronation, determined to prove herself to Roiben and the rest of the court, she makes a formal declaration and pledges herself to him as his consort. However, faerie custom demands that a quest be undertaken before anyone can sit as the Lord's consort, and Roiben grants Kaye an impossible task: to find a fairy who can tell an untruth. Now she is forbidden from seeing or speaking to him until she completes something she knows cannot be done. Kaye doesn't know where to go, because she has been feeling uncomfortable at home as well, knowing that she stole a human child's life. In a moment of desperation, she tells her mother the truth: that she is a changeling that was switched with Ellen's real daughter, the real Kaye, and she vows to retrieve her from the Seelie Court and return her to Ellen. She feels that this, at least, is something she can do, even if there's no way she can complete Roiben's quest. But with all the tension between the courts there is nowhere safe, and in venturing into the Seelie Court to find her human counterpart, Kaye puts herself within reach of Lady Silarial. Silarial wants Roiben's throne, and she's willing to do anything, including using Kaye, to get it. Once again Kaye finds herself in the middle of Faerie politics, but this time Roiben's not there to save her, and she may not have a way out. In my personal experience it is rare that a sequel ever lives up to the first book, but IRONSIDE does just that. Full of court rivalry, deception and betrayal, sword fights and murder, faerie curses, new romances, and even characters from Valiant: A Modern Tale of Faerie, IRONSIDE is another wonderful foray into the dark, gritty world of Faerie and will not leave readers disappointed. It will make you laugh, it will make you cry, it will make you pound your pillow in frustration and clap your hands in delight. My one and only complaint is that this is the last book set in this amazing world. Reviewed by: Andie Z.
Copyright © 2020 Thriftbooks.com Terms of Use | Privacy Policy | Do Not Sell My Personal Information | Accessibility Statement
ThriftBooks® and the ThriftBooks® logo are registered trademarks of Thrift Books Global, LLC