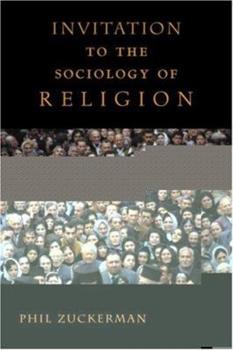 Invitation to the Sociology of Religion

This book intends to serve as a conversational, colorful, engaging, and provocative introduction to the sociology of religion for undergraduates. Written in lively prose, this volume aims to introduce students to the major themes, problems and goals of the sociological study of religion while also summoning the sense of wonder and curiosity for the enterprise itself.

Some basics and general overview of the Sociology of Religion

Published by Thriftbooks.com User , 15 years ago
The Invitation to the Sociology of Religion is the book for those who are either social scientists, student of sociology or anyone simply interested in this particular topic of Sociology of Religion. The book is a scholarly work, written by Phil Zuckerman who is a scholar, and a sociologist of religion. It is an easy read even though it is a serious subject with a lot of important information and details. Phil Zuckerman is writing about subject that affects our lives on many fronts, even if some of us not religious at all. He has taken up a task of showing a dialectical relationship between the society and the institution of religion. Our existence in this dualism is not only an important factor to know and understand, it also crucial to see how both sides work in our world, maybe we will learn something about our ways as a society. Basically in short the book can be expressed by the following: the essence of society is present and affects religion and the essence of religion is present and affects society. Even though the book is relatively short, Zuckerman was able to convey his research and his main ideas effectively and persuasively. As mentioned earlier the book is an easy read, but it is not to be confused with entertainment literature. It is a serious work based on years on research and study of dualism between society and religion. The book starts out simply by giving statistics on whom and where are people more religious or less, he gives some percentages where he states that industrial and post-industrial countries have less people who are devoutly religious as oppose to in low income countries. He makes a point by saying that some people cling to their faith due to ethnic backgrounds, and gives an example of his father who is Jewish/Atheists, who goes to synagogue to talk to Sam, while Sam is there to talk to god. Such occurrences are common among people whose religion defines their cultural and ethnic background. Since, in many cases, religion defines people and their culture, it safe to assume that if lets say Zuckerman's father was born in Yemen in 1785 he 100% be Shiite Muslim, or if he was born in Ethiopia in 19th century he would most likely belong to Coptic Orthodox church. The argument here is the time and place is as important as sun to our survival. It would make great difference if the same person was born in different time and in different place, the notion that not just offends the "true" beliers but it angers them Another important factor in the book is his mission to eliminate the myths and lies about cults and sects. The thesis here is that there is no really difference between the "official" religion and so-called cults and sects. By that he means that all three have a set of bylaws and/or holy scripture, all three have charismatic and powerful leader who they would obey no matter what. Whether it the Pope or David Koresh who was a leader of Branch Dravidians, the religion that did not go so well, because of the

Fun to read -- and so provocative.

Published by Thriftbooks.com User , 18 years ago
This is one of the best books I have ever read about religion. I am personally not religious but I have always wondered how so many people can be so religious and I have always had all these theories about religion -- many of which were confirmed in this book. Fundamentalists will probably hate this book -- and will surely be offended -- because the writer clearly thinks religion is not true, or at least a lot of the details. This is a very sociological approach (obvious from the title) and the author uses a lot of fascinating examples, especially a lot of stuff about Mormons. Other topics I liked were the discussion of religion and sexuality, religion and the Civil Rights Movement, and the last chapter about some kids believing in fairies and some in Jesus. The book is written in a very casual style, and has lots of anecdotes. But the theories are also strong and serious. A great read.
Copyright © 2022 Thriftbooks.com Terms of Use | Privacy Policy | Do Not Sell My Personal Information | Accessibility Statement
ThriftBooks® and the ThriftBooks® logo are registered trademarks of Thrift Books Global, LLC