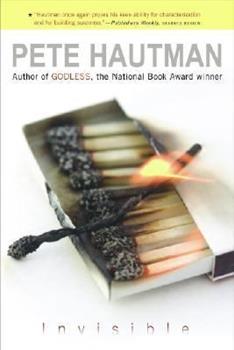 You could say that my railroad, the Madham Line, is almost the most important thing in my life. Next to Andy Morrow, my best friend. Lots of people think Doug Hanson is a freak -- he gets beat up after school, and the girl of his dreams calls him a worm. Doug's only refuge is creating an elaborate bridge for the model railroad in his basement and hanging out with his best friend, Andy Morrow, a popular football star who could date any girl in school...

Published by Thriftbooks.com User , 15 years ago
this is not my typical kind of read, but i am telling you, it is a MUST READ. i cried with so much emotion that it scarred me for days. beautiful and saddning, this book would be on my top of the list.

Published by Thriftbooks.com User , 16 years ago
Seventeen-year-old Doug Hanson just wants to be alone with his trains. No one understands him except his best friend, Andy. His parents make him see a counselor, which he knows is pointless: Dr. Ahlstrom is not helping me one bit. Why? Because I do not need help--it's as simple as that (p. 22). So he doesn't want to make new friends or hang out with the kids at school--does that make him "troubled?" Of course not. But only Andy seems to understand that and accept him as he is. Hautman draws the reader into the world he creates and holds them captive. One becomes as mesmerized with the model bridge Doug is building as he is; after a couple of rounds of counting by seventeens, this reader finds herself giving it a try. As the story unfolds, she begins to wish everyone would just get off Doug's back and let him build his models. Must everyone be popular, after all? INVISIBLE is an excellent choice for readers who enjoy a bit of mystery with their realism, and Hautman is a master of words, only revealing "why" when the reader is least cognizant that there is even a question waiting to be answered. Reviewed by: Mechele R. Dillard

Published by Thriftbooks.com User , 16 years ago
The book I read was Invisible by Pete Hautman. I really have to say I have never read a book that changes my take on things with a couple of words. I have read a lot of realistic fiction books and they were all good, but they didn't have that disturbing, leaving you hanging and you just want to read more feeling. This book talks about friendships, hard ships, fire, and art; however, along with all of these things the book talks about your "inner demons". Now you understand what this book talks about, but you don't know what it is actually about, which is Doug. Doug is the kid who gets beat up after school and the girl he really likes thinks he's a worm, but he has one thing, a true friend. Andy is Doug's popular, star football player, can get any girl he wants best friend. They always talk about everything with each other in the late of night, each in there windowsills. Doug's neighbor, who lives with Andy, keeps telling Doug's parents he is getting creped out by Doug talking to himself at night, but Doug knows he is talking with Andy. Besides being friends with Andy, Doug makes elaborate train sets out of matchsticks and draws there unique signature. The first time Doug ever carved the signature was in the Tuttle house and that is the one thing they never talk about. I really liked this book because Pete Hautman wrote in First Person so to me it felt like he was talking write to me and yet it also felt like he was keeping something from me. He was giving his whole heart to me except there was still a piece left that I didn't know, but felt I knew everything about. I would give this book five stars out of five stars because unlike most books it doesn't give you clues to the ending. It lets you keep guessing and guessing until you finally find out what you thought was the answer, was completely off from the truth. I would recommend this book to most people, but if you are a person that can't deal with something that isn't Walt Disney or tragic love tale then this definitely isn't the book for you, but if you like mystery and misery then I say yes read this book right away. This book is slightly related to another favorite book of mine called Inkspell by Cornelia Funke.

One of the top teen reads of the year

Published by Thriftbooks.com User , 16 years ago
This comes in as one of my favorite YA reads published in 2005. There is brilliance, elegance, and genius in simplicity, and Pete Hautman's Invisible exemplifies this maxim. Despite the fact that it is less than 150 pages long, with a large font and short chapters, Invisible covers years of events, actions, and emotions with remarkable clarity. Teenaged Doug Hanson is a freak--he stares inappropriately at girls, he is despised by his classmates, he has a fascination with fire, he dwells on various ways of death (fire vs. freezing), and he can produce nothing in art class other than repeated versions of his signet. The only person who understands Doug is his next door neighbor, the popular football player Andy, Doug and Andy chat through their windows at night, and Andy advises his friend not to be so risky with his habit of spying on girls in their bedrooms. Too bad Doug's parents and his therapist think he's talking to himself when he converses with Andy. Invisible is a brilliant look inside the man of a troubled teen, one who has criminal incidents in his past, no friends in the present, and an absolute obsession with both model trains and pyrotechnics. The narrative voice of this novel is pure poetry.

Published by Thriftbooks.com User , 17 years ago
"Trouble Oh trouble set me free I have seen your face And it's too much too much for me Trouble Oh trouble can't you see You're eating my heart away And there's nothing much left of me" --Cat Stevens, "Trouble" Pete Hautman's INVISIBLE is going to make for one hot booktalk. "My full and proper name is Douglas MacArthur Hanson. I am named after Douglas MacArthur, the famous general, who was a second cousin of my father's great-aunt. Everyone on my father's side is named after some famous person we are supposedly related to. My father's name is Henry Clay Hanson. Henry Clay was a politician who died before the Civil War. He was my grandfather's cousin's great-uncle. Or something like that. It goes on and on. Since my grandfather's name was George Washington Hanson, I guess I'm related to the father of our country too. Anyway, I'm glad I got named after a general instead of a politician. I think it makes me sound more respectable. "Usually when I meet someone for the first time, I tell them my full and proper name. Then I say, 'But you can call me General.' Some people find this amusing. Andy always laughs. Sometimes he calls me General, just to tease me. I don't mind. I kind of like it. I am very easy to get along with. "My mother would not agree with that. She finds me difficult. In fact, she thinks that I am troubled and disturbed. I find it troubling that she finds me disturbing, so she must be right. "Right?" In a spectacular and tense piece of writing that recalls my favorite Cormier novel, I AM THE CHEESE, but with the strings pulled even tighter, Pete Hautman has created a disturbingly real character whose troubled life will cause you nightmares. " 'Haven't I seen you somewhere in hell, or was it just an accident?' " --Jimi Hendrix, "My Friend" Dougie is a loner who is thoroughly obsessed with the model train world he has created in the basement, with numbers and order, and with the beautiful Melissa Haverman. His best friend and next door neighbor, the popular Andy Morrow, is both a drama kid and the star quarterback on the football team. "And it's burn baby burn When am I going to get my turn?" --Bruce Cockburn, "Burn" "Do I strike you as troubled? "Let me give you some facts and figures. I am seventeen years old. I am a junior at Fairview Central. I have never skipped school and I have a 3.4 grade point average. I do not use drugs or alcohol. I have never been seriously ill. I have never broken a bone, lost a limb, or had an organ removed. I am scrupulously honest, except for necessary lies. I sleep well at night. I am not a loner. I have a best friend." Do NOT believe him. And do NOT start reading INVISIBLE if you have to be anywhere important in the next couple of hours.
Trustpilot
Copyright © 2022 Thriftbooks.com Terms of Use | Privacy Policy | Do Not Sell My Personal Information | Cookie Preferences | Accessibility Statement
ThriftBooks® and the ThriftBooks® logo are registered trademarks of Thrift Books Global, LLC