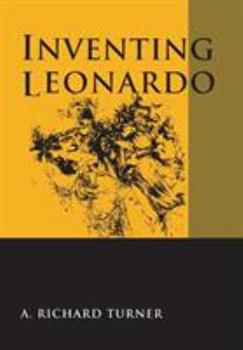 by A. Richard Turner

As he examines the changing views of Leonardo since the sixteenth century, A. Richard Turner both gives the reader a cultural history in brief of western Europe during this period and provides a context for examining Leonardo's relevance to our own ways of perceiving and interpreting the world.

An in depth look at Da Vinci

Published by Thriftbooks.com User , 17 years ago
Not a book for a reader to explore Davinci for the first time--but more of an advanced look at the style and creativity of the subject. The most interesting analysis of the book is the fact that Davinci could not help himself to learn and explore. He was driven to it almost to the point of addiction. Even when the church got in his way he figured out to circumvent the obstacles.

A Philosophical Look At The Maestro

Published by Thriftbooks.com User , 22 years ago
This book attempts to summarize the vast amount of information that has been written about Leonardo during the 500 or so years since his death. I bought it after seeing the author on the A & E Biography episode about Leonardo. On the show the author indicated that Leonardo was not at all like a modern scientific thinker. I think people can relate to Da Vinci more easily than they can to someone like Einstein. Einstein could not have painted the Mona Lisa but then Leonardo didn't invent the theory of relativity either. But the Mona Lisa is something that the average guy on the street can relate to while the theory of relativity can only be understood mainly by scientists. Da Vinci may not have been so much a genius as someone who did many things well and had a very active and energetic mind. He represents as much the spirit of achievement as actual achievements. He seemed to have so much mental energy that learning was something he simply had to do. It was not optional for him. What makes Da Vinci interesting is the unique combination of artistic and scientfic interests that he had. Some of Leonardo's notebooks were recovered relatively recently from a historical point of view so the idea of da Vinci as a Renaissance genius is a pretty new idea. At the end the book he attempts to maybe clarify and expand on the earlier material so that Leonardo can be re-invented hopefully more accurately for our era. In fact if Leonardo da Vinci had never existed someone probably would have invented a fictional person like him. Someone who knew basically everything which of course Leonardo did not but people sometimes like to give him the benefit of the doubt. Quite a bit is said about the Mona Lisa. The Mona Lisa appears to be a self portrait by Leonardo, not of his physical life as Leonardo, but of his soul. Old, peaceful, content, mysterious. It also talks about a painting of some guy with snakes crawling out of his head which was mistakenly (?) attributed to Leonardo for many years. Leonardo had some problems. The author expresses some resentment that the fields related to the humanities are held in low esteem these days by some people. The author's writing style indicates he's into philosophy. This is not a book for someone trying to get a general idea of what Leonardo was interested in and why he is considered by some to be a genius. It's more about understanding the maestro from a philosophical point of view. Plato: Apology Same Soul, Many Bodies: Discover the Healing Power of Future Lives through Progression Therapy The Atlantis Dialogue: Plato's Original Story of the Lost City, Continent, Empire, Civilization Edgar Cayce's Atlantis

A lively look at Leonardo in fact and myth.

Published by Thriftbooks.com User , 22 years ago
Unlike just another standard biography or monograph, this book makes a useful contribution to the already crowded arena of Leonardo studies. The black-and-white illustrations are barely adequate, but there is a particularly helpful bibliography. Recommended for art history faculty and advanced students.
Trustpilot
Copyright © 2022 Thriftbooks.com Terms of Use | Privacy Policy | Do Not Sell or Share My Personal Information | Accessibility Statement
ThriftBooks® and the ThriftBooks® logo are registered trademarks of Thrift Books Global, LLC