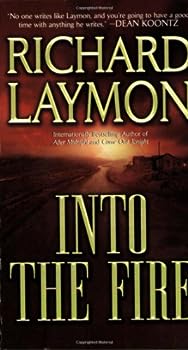 This description may be from another edition of this product. Pretty, young Pamela was a very happy newlywed, with a loving husband and a beautiful home. But all that changed the night Rodney broke in. He's been obsessed with Pamela since high school and now he...

Published by Thriftbooks.com User , 12 years ago
The most sexually explicit Laymon book I've read. Evil story with lots of mindless murder and sex. I must read for Laymon fans!

Good Gawd!! This book is AWESOME!!!

Published by Thriftbooks.com User , 15 years ago
This was my first Laymon book and I was thoroughly entertained and disgusted.A huge nasty gorefest if you love that kind of stuff.I'll read all his books now!!

Another smoldering page turner from Laymon

Published by Thriftbooks.com User , 15 years ago
Every time I pick up a Richard Laymon book I get goose bumps and I just know that the next couple of days will be drenched in an unforgettable adventure, as he cooks up the best stories, great characters and for sure delivers action and gore. I came across his books last year while browsing the shelves of my bookstore and I can safely say that I became a bigger reader of horror after a single book he wrote, now a few books later I'm a huge fan but I read them sparingly, since his passing a few years ago, because no one can ever write just the way he does and I save him as a tasty treat to read when I'm starving for a great book. Into the Fire is another tale of solitude at its worst, this time Pamela, our main character is not in the middle of the woods or mountains, she's not in a village but out in the smoldering desert. The writer really makes sure you know that there is no escape and the fights she has to put up either mean life or death. Richard described the scouring heat and suffering as Rodney Pinkham, took Pamela from her home and drove her into the middle of nowhere, in a California desert with his own sick ideas and desires in mind. He had the car keys, the gun and was twice as big as Pamela. The reader gets settled into the crazy world of Laymon and really heads into the fire to read of twisted paths of greed, lust and power This story has the wonderful Laymon twist of two tales coming into one. Pamela and her captor on one hand, as she gets rescued but a mysterious man called Sharpie who drives buss full of mannequins through out the desert, but can he be trusted? Is he a savior or another sicko like Rodney and what choice does she have? To get on the bus or to stay in the desert and fry to death. The other tale starts with a very interesting group of characters and the things they did and said left me sitting with my eyes open wide quite a few times. Norman was a college guy on his way home as he got entangled with a bad boy Duke and a chunky, pig like in his mind girl named Boots. Norman found her both repulsive calling her names in his head but as her tricks playing the naive blonde worked their charm enough to make him lust for her he found himself unable to resist the trouble making twosome as they engaged in very questionable activities which included making tons of corpses. I couldn't believe how easily the bad guys made away with many people in this book, and I loved trying to figure out how the two stories would come together in an explosive ending. I really loved the tiny town of the Pits, population of 6, with its very strange and creepy history and the things that Pamela uncovered about its inhabitants only added more gore and spice to the story. The end was one of the best and wackiest ever, as I surely didn't find one boring page, gulping it down as if I was stranded on the desert myself. This isn't the deepest book, and there is a lot of hanky panky going on but come on, this is Richard Laymon, the man has cult f

Published by Thriftbooks.com User , 15 years ago
Usually I don't bother reviewing things I like or don't like - I think you should just come to your own opinion by yourself. However, comments such as 'didn't deserve to be published' are uncalled for. If you did like Laymon, why would you write things that are likely to turn away people who have yet to discover him? Given that Headline (UK) will release no more Laymon, I'm glad we have Lesuire (US) committed to publishing both his classics and unpublished gems. This book is a gem, and although he has other books I love more, you can never go wrong with Laymon. Ever.

Published by Thriftbooks.com User , 16 years ago
Rodney Pinkham tells his captive handcuffed Pamela that he has loved her from the moment he first saw her at Sally's thirteenth birthday party, but he figures she was like the others calling him piggy behind his back. Since his obsession took hold, he calmly as a matter of fact informs her that he has killed fifteen females and her husband Jim to get to her. No one, but he is to have her as she will be his slave for life. He takes her into the Mohave . She tries to escape and in the subsequent brawl Rodney is about to kill her when the shot is fired and he falls off her with a bullet in his forehead. Pamela is on a strange bus filled with mannequins and a driver who insists on nobody talking to him while he is at the wheel. When he stops to dump Rodney's corpse he introduces himself as Sharpe. Quiet Norman picks up Duke and Boots, but soon the trio meets up with the glory bus that Sharpe is driving to Pits, California. Not all will ever leave the bus; those who do cannot leave town which has a population in single digits; Pamela knows she has jumped INTO THE FIRE. Richard Laymon writes a weird horror tale that leaves the audience wondering what eerie escape will occur next forcing the beguiled stunned fan into a one sitting read. The story line never slows down from the moment Rodney informs his prisoner of his fixation until the final mannequin count. INTO THE FIRE is a dark grim tale that stars fully developed characters in nightmarish environs with judgment day occurring in the Mojave Desert with sentencing being an eternal bus ride. Harriet Klausner
Copyright © 2020 Thriftbooks.com Terms of Use | Privacy Policy | Do Not Sell My Personal Information | Accessibility Statement
ThriftBooks® and the ThriftBooks® logo are registered trademarks of Thrift Books Global, LLC