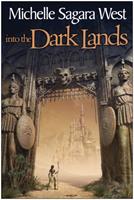 Into the Dark Lands

(Book #1 in the Books of the Sundered Series)

War has its cost, and the Servants of the Bright Heart and the Servants of the Dark Heart have been locked in a struggle that has defined life--and death--for millennia. But the end is coming, and only the Lady who has served the Bright Heart for the whole of her immortal life has seen it, in a vision that spans time and demands the highest of prices. Erin is a healer, and against the nature of her birthright she has learned to wield a sword and use...

Published by Thriftbooks.com User , 14 years ago
Into the Dark Lands is the first in the Sundered Quadrology. It begins the story of Erin of Elliath, Warrior of the Light, and Stefanos, First Servant of the Dark. Erin is born into a time of constant conflict, the Servants of the Bright Heart and the Servants of the Dark Heart have been locked in a war for millenia. The Lady of Elliath has traversed various futures, trying to find the one that will end the war. She has found only one slim hope that her granddaughter Erin will be able to pull a lasting light from the darkness. The course she chooses for her people is full of sacrifice and pain, risking everything for just the possibility of success. Erin is born a healer, scarred by personal loss, she chooses instead to wield a sword and fight the enemy on the battlefield. But her greatest struggle will happen after she is captured by Stefanos and taken to the Dark Heart's stronghold. I loved this story. It's not one I'd recommend if you prefer a lighter romantic tale. It's essentially a very dark version of Beauty and the Beast. Bear in mind also that it's not concluded here, there are three more books to come. The character description can be sparse, I think the only physical thing we learn about Erin is that her hair is auburn, and then not until well into the story. I often find myself imagining characters differently to how authors describe them, so this was quite freeing. The first part of the story deals with Erin's childhood, her training and how she becomes a warrior. There are scenes here that are absolutely heartbreaking. When Erin attends her father's funeral as a young child. MSW absolutely captures the loss of childhood innocence. Eventually Erin is chosen to be Sarillorn of the Line, a member of the Lernari who contains a portion of the Lady's power, and carries it onto the battlefield. It is through her exploits as Sarillorn that she captures the interest of the First Servant of the Dark. At the end of battles Erin heals both her own side and that of the enemy, causing some of the mortal members of the Malanthi army to change sides. She becomes a great threat. When she is eventually captured by Stefanos, she offers herself in exchange for the other hostages. So begins the second part of the story - the development of a relationship between Erin and Stefanos. He agrees to her bargain, because there is something in her that draws him, and he wants to take her apart over and over again, until he can understand what it is. Make no mistake Stefanos is not misunderstood, he's empty of all save his purpose - he isn't human and MSW just makes this so clear. What he forgets however, is that when the darkness touches the light, the light also touches the darkness. By torturing Erin, he is also changed. This story is so much about choice - what would you give up, what would you sacrifice for a lasting peace, for love when you never understood what love was. It's also about the nature of things. Stefanos remains true to his nature,

Approach with an open mind

Published by Thriftbooks.com User , 15 years ago
Michelle Sagara West herself in the introduction states that a reader had once equated the romance between Erin, the heroine, and Stefanos, the (anti-?)hero as a type of Beauty and the Beast. I agree but the story is so much deeper and more compelling. Initially, the book seems complex because it sets the stage for the "main" storyline by explaining the world of "Light" and "Dark." As mentioned by other reviewers, the 2nd half is simpler in its focus on the romance but upon rereading the book several times, I personally saw a parallel between the romance and the struggle of the Light and the Dark. I am still waiting for books 3 and 4 of the series because I NEED to know what happens to Erin and Stefanos. This book was one of Ms. West's earliest works so that if you read the Sun Sword series, you will recognize the focus on the characters but the plot is sparer and more direct. I found it refreshing because it made me focus more on the relationship between Erin and Stefanos. If one doesn't expect the level of intricacy of the Sun Sword series, one will find the book a delight.

Published by Thriftbooks.com User , 19 years ago
This book (actually, the entire series) is incredible. When I started reading it, it seemed utterly dead- "Unending war between ultimate good and ultimate evil, same old same old". After a few chapters, however, it changed. The plot skipped off the old beated track, and went galloping across the hill, into new unexplored areas of amazingly original territory. Get all four books, and enjoy the ride!

Published by Thriftbooks.com User , 22 years ago
Michelle Sagara's Sundered series opens like a night flower in this dark, stirring story of light and dark, love and blood and tears. This is an enthralling romantic fantasy, grim yet beautiful, in its characterization and mood setting. In the tale, the strong-willed and courageous Erin exchanges her life for that of her people, bargaining it away to her fated enemy, the Dark Lord Stefanos. Yet he gets much more than he bargained for when the two of them fall in love, a forbidden union of light and shadow. The portrayal of the two central characters is amazing and moving. The chemistry between them is evident and touching. The best romance I'd ever come across.

The ultimate, distilled essence of the Beauty & Beast story

Published by Thriftbooks.com User , 23 years ago
Starts out like your average Heroine of the Light vs. the Dark fantasy novel, but when the anti-hero appears the story will reach out and grab you by the throat and not let up until the end. So intense in places I thought my heart would stop. Warning: this is NOT your average romance. Get all four books before you start or you'll be risking your sanity.
Copyright © 2022 Thriftbooks.com Terms of Use | Privacy Policy | Do Not Sell My Personal Information | Accessibility Statement
ThriftBooks® and the ThriftBooks® logo are registered trademarks of Thrift Books Global, LLC