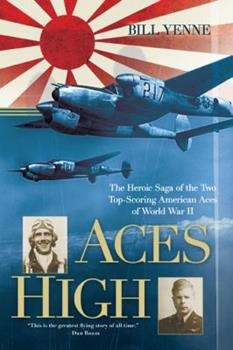 Capturing the hearts of a beleaguered nation, the fighter pilots of World War II engaged in a kind of battle that became the stuff of legend. They cut through the sky in their P-38s to go one-on-one against the enemy--and those who survived the deadly showdowns with enough courage and skill earned the right to be called aces. But two men in particular rose to become something more. They became icons of aerial combat, in a heroic rivalry that inspired...

Published by Thriftbooks.com User , 11 years ago
I thought this book was very exciting, almost as if I were there. This is one of the few books that I've read about the war in the Pacific that goes beyond Midway and Iwo Jima. In addition to the race of aces, it brings to light many more struggles that were fought by Cavalry and infantry. Bill Yenne mentioned many of the places my father was at with the First Cavalry during the war. He also memtions in a couple of places the VFM-222. I have a personel friend that was with the Flying Deuces during this exact time. These two points made this book a little more personel for me. I recommend this book to anyone who is a World War II buff or anyone who knew someone in the Pacific during this time. I truly enjoyed this book.

Aces High, Hard To put Down!

Published by Thriftbooks.com User , 12 years ago
For military aviation history buffs this is a great book. Thomas Mcguire's competition with Richard Bong to be the number one ace in the Pacific was very interesting. I had read accounts by historians about both men but this was the most interesting account I have read so far. I really enjoyed this book. Jerry Pickard

Published by Thriftbooks.com User , 12 years ago
Aces High takes you to a place and time far far away...back to the days of the Aces. Outstanding book!

Published by Thriftbooks.com User , 12 years ago
During World War II, there were many pilots who claimed the title of "ace" for shooting down five enemy aircraft, and some, including Neel Kearby, Tommy Lynch, Pappy Boyington, Mac MacDonald, and David McCampbell ran up scores well into the twenties. But the two pilots who stood head and shoulders above the others were Major Dick Bong and Major Tommy McGuire. These two pilots would end up downing 40 and 38 enemy planes respectively. These two pilots were different from a personality standpoint, but when it came to fighting the enemy, they were like well-oiled machines. Bong, a quiet farm boy from Poplar, preferred to bore straight in on his targets, while McGuire, a wise-cracking fast talker from New Jersey, was a master at manuvering and high-angle deflection shots. No matter what the technique, these two pilots scored like no other American pilots did. These two pilots engaged in a great "Ace Race". Each was always aware of what the other was doing and how many kills the other man had. Despite this race, each man had respect for the other, and they even flew together in the same squadron for a period of time. Once Dick reached 40 kills, General Kenney pulled him from combat and sent him home. The door was now wide open for McGuire, who had 38 kills, to pass Bong and take the title of "Ace of Aces". Unfortunately, this was never to be, as Tommy ended up getting killed on January 7, 1945. Perhaps it was Tommy's desire to pass Bong that lead to his death or the questionable tactics he used on that day, such as not dropping his external fuel tanks before engaging the enemy. No matter what the facts were, the outcome left Dick Bong as America's all-time top-scoring ace. Dick continued flying after reaching the States. he became a test pilot for Lockheed, flying the new P-80 Shooting Star jet fighter. He and his wife Marge, whose picture was displayed on Bong's P-38 in the pacific, had settled in Southern California, close to where Dick would be working. On August 6, 1945, the same day of the atomic bomb attack on Hiroshima, Dick was killed in a P-80 test flight. America had now lost both McGuire and Bong. However, these mens' legacies still live on today. This is an excellent book. Author Bill Yenne does a great job of explaining both Bong's and McGuire's flight careers. He also devotes a chapter to the development of the P-38 Lightning, which both men flew with such deadly efficiency. McGuire's meeting with Charles Lindbergh and their time spent flying together in combat is highlighted as well. Each major encounter for both pilots is covered, and their running totals are listed at the beginning of each chapter. I give this fine book my highest recommendation. There were many great American pilots who fought in World War II, but Dick Bong and Tommy McGuire stand above all others.

Published by Thriftbooks.com User , 18 years ago
I was pleasantly surprised after purchasing this book that it covered Aces from all "main" countries fighting in WWII. (From the cover pictures of a P-40 WarHawk and the 2nd picture of a group of fighter pilots standing in front of a P-38 Lighting I orginally thought it just covered the U.S.) The book tells the story of the top Aces from numerous countries, both Axis & Allies, and there fate. For eight dollars, it is well worth it. I would definetly buy this book again!
Copyright © 2020 Thriftbooks.com Terms of Use | Privacy Policy | Do Not Sell My Personal Information | Accessibility Statement
ThriftBooks® and the ThriftBooks® logo are registered trademarks of Thrift Books Global, LLC