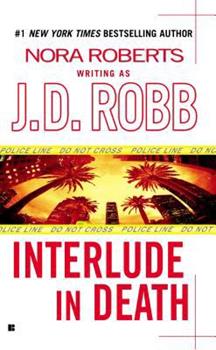 We receive 75 copies every 6 months.

This description may be from another edition of this product. In early spring of 2059, Lieutenant Eve Dallas is called off planet to face a grueling ordeal - giving a seminar at the largest police conference of the year, to be held in a swanky resort. A resort...

Published by Thriftbooks.com User , 14 years ago
In the year 2059, Eve, the tough cop, and her husband, Roarke, attend a Law Enforcement and Security Conference at the Olympus Resort on another planet. The Olympus Resort is owned by Eve's wealthy husband, Roarke. As the plot thickens, there is a murder in the resort for Eve to solve. Totally fascinating, taking your imagination on a ride visualizing life in the future. I really love these short stories of Nora's so you are not spending several days reading one book in your spare time. Marty Wurtz Author of Deceptions and Betrayals

a don't want to miss

Published by Thriftbooks.com User , 14 years ago
Eve Dallas & Roarke fans must not miss this one. It's another excellant read.

Published by Thriftbooks.com User , 14 years ago
To Lieutenant Eve Dallas' dismay, she once again finds herself on her husband's posh resort planet where they had spent the last week of their lengthy honeymoon. But this visit to Roarke's domain isn't for pleasure, but business. Police business. Her irritation with her commander at being summoned to a police convention only heightens when she is charged to become a keynote speaker at that same convention. But, even that pesky assignment takes a backseat when she is introduced to a legendary icon in the police world: retired Commander Douglas Skinner. Eve soon discovers that the retired commander has a violent hatred toward her husband, Roarke, with a secret agenda of revenge in mind. Together, Eve and Roarke unravel the commander's plans, but not before multiple deaths throw Eve back into another murder investigation. For those of you who are avid lovers of J. D. Robb's "In Death" series, this episode is a must! It brings into focus just one more piece of the puzzle of Eve Dallas.

The Faces of Murder Are Varied and Complex

Published by Thriftbooks.com User , 15 years ago
The above quotation, which J.D. Robb utilizes to introduce this novella, effectively captures the essence of the murders which form the basis of this story. INTERLUDE IN DEATH was originally released in an anthology titled OUT OF THIS WORLD, a collection of futuristic stories by four well known women authors. It can be understood as a standalone story, but its brevity does not allow the amount of character development or background information that is available in the full length novels. Thus, my rating reflects those factors and I believe will be shared by listeners familiar with the series' main characters, who undoubtedly will find this more enjoyable than those unfamiliar with the ... IN DEATH series. This story takes place during the spring of 2059, it was published chronologically after BETRAYAL IN DEATH, the twelfth full-length novel in the series. Eve Dallas is upset - her commanding officer has placed her in a situation that involves three things that she detests; attending social events, public speaking and off-planet travel. He has scheduled her to make a presentation at a seminar during an interplanetary police conference being held at Roarke's spectacular new Olympia resort. Of course, Roarke is delighted, as he views it as a chance to vacation with her and show off the resort, a trip which she undoubtedly would have refused to make if not for the fact that it was an official request which she could not refuse. When they arrive, Roarke has been energized by the space travel while Eve is exhausted by the tension of the trip and her fantasy of the rocket crashing into a stray meteor and her being burned to a crisp by a fire fed by the rocket fuel. Perhaps the only consolation for Eve is that Lt. Peabody, Feeney and Dr. Mira are all at the welcoming reception. Of course, the reader immediately recognizes that the presence of these familiar characters means that this conference will be anything but a restful interlude for Eve and Roarke, and instead will undoubtedly morph into an INTERLUDE IN DEATH. Eve immediately meets the legendary Commander Douglas R. Skinner, his wife Belle and his adjutant Bryson Hayes. Skinner was wounded during the urban wars and attained the rank of full Commander by the age of 44. He requests a private meeting with Eve at which he makes known his intense dislike of Roarke and insults her with his comments regarding her lack of judgment and the effect it would have on her career. Eve and Roarke are both amazed at his vehemence and his desire to discredit Eve and destroy Roarke, who of course vows to discover the source of Skinner's hatred in order to protect both Eve and her career given the nature of Skinner's reputation and connections. Soon, a murder occurs and the evidence points to Roarke or someone in his employ. Eve's desire to pursue the investigation is complicated by the fact that the resort is outside her jurisdiction; she soon learns that the police chief of the resort (hired by Roarke) is a s

VETERAN READER OF THIS SERIES JUST GETS BETTER AND BETTER

Published by Thriftbooks.com User , 15 years ago
The In Death series, as the better part of the reading world knows, is a futuristic mystery series craftily plotted and cleverly penned by Nora Roberts writing as J. D. Robb. There are well more than a Baker's Dozen in print now, and can enjoyably be read as stand alone novels. Or, if you're an intrepid fan you can begin with the first - Naked in Death, work your way through Holiday in Death, and so on. What those who do not read the entire series may miss is the evolving relationship between Lieutenant Eve Dallas and her husband, Roarke. The suspense, the surprises, and Robb's vivid imaginings are all there for you to enjoy whether you listen to one or all. Once again, Susan Ericksen narrates. For this listener the pleasure always increases when one has come to associate a performer with a character through a number of readings. One of my favorite memories is of the narrative skill with which she tackled Conspiracy In Death. She seems to become stronger, more assured with each reading of this series - and that's saying something. Who wouldn't love a vacation at a posh resort? To Eve Dallas the price for this sojourn seemed well, almost negligible - all she has to do is address a police conference. However, forget the spa and saunas as murder rears its ugly head. Eve begins to investigate although she's hampered to a degree by her personal knowledge of the deceased and spurred onward by a past that the killer shared with Roarke. Enjoy! - Gail Cooke
Copyright © 2020 Thriftbooks.com Terms of Use | Privacy Policy | Do Not Sell My Personal Information | Accessibility Statement
ThriftBooks® and the ThriftBooks® logo are registered trademarks of Thrift Books Global, LLC