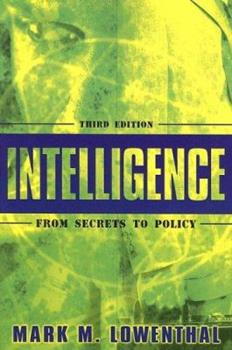 Centering his discussion on US practice and institutions, Lowenthal (president and CEO, Intelligence & Security Academy LLC, a national security education, training, and consulting firm) introduces the role of intelligence in national security policy. He begins with a brief history and overview of the US intelligence community. He then offers the

Published by Thriftbooks.com User , 19 years ago
Mark Lowenthal, who today is the Associate Deputy Director of Central Intelligence for Analysis and Production (ADCI/A & P), was briefly (for a year) the President of OSS USA (I created OSS Inc., the global version). So much for disclosure and "conflicts of interest". The previous review, after a year of being irritatingly present, needs to be corrected. Dr. Lowenthal was for many years the Senior Executive Service reviewer of intelligence affairs for the Congressional Research Service, then he went on to be Deputy Assistant Secretary of State for Intelligence & Research (Analysis), and then he became the Staff Director for the House Permanent Select Committee on Intelligence, where he supervised one of the two really serious really excellent studies on all that is wrong with intelligence and what needs to be fixed. OSS was lucky to have him contribute to its development for a year before he moved on to another corporation and then to the #5 position in the US Intelligence Community. He needs no help from me in either articulating his ideas or doing good work.What the previous reviewer fails to understand is that Dr. Lowenthal's book represents the *only* available "primer" on intelligence that can be understood by Presidents, Congressmen, the media, and the public. While my own book (The New Craft of Intelligence) strives to discuss the over-all threats around the world in terms meaningful to the local neighborhoods of America, Dr. Lowenthal's book focuses on the U.S. Intelligence Community itself--the good, the bad, and the ugly. He is strongest on analysis and the politics of intelligence, somewhat weaker on collection and counterintelligence covert action. There is no other book that meets the need for this particular primer, and so I recommend it with enthusiasm. It is on the OSS.NET list of the top 15 books on intelligence reform every written.

The book used by the Research Intelligence Analyst Program

Published by Thriftbooks.com User , 22 years ago
This is the book we use at Mercyhurst College to train both undergraduates and graduates in preperation for future work as an intelligence analysts. Highly recommended. The only college granting a degree in intelligence thinks you should read it. So do I.

A readable, well balanced treatise on the subject

Published by Thriftbooks.com User , 22 years ago
Mark's latest book is a well-written, accurate depiction of the US intelligence business and various areas of intelligence tradecraft. His section on the US intelligence community will become outdated in time, but in it he develops an interesting functional view of the community. The book is very readable for newcomers while still being of interest to veterans of the business. It is intended to have broad coverage rather than depth. It would be admirably suited as a textbook for a short course on intelligence.

A significant contribution to intelligence literature

Published by Thriftbooks.com User , 22 years ago
This valuable and recent contribution to the intelligence bookshelf promises to become a classic text for any practitioner and student of intelligence. Understanding how the intelligence process can work efficiently, how consumers of intelligence can best utilize the process, and how essential it is for producers of intelligence to receive feedback by consumers (a critical and often lacking element), are among some of the major themes discussed. Perhaps one of the most valuable sections of the book is the chapter on the analysis process itself, considered to be the most difficult process in the intelligence cycle. The author clearly provides the reader with exceptional comments regarding analyst training, politicized intelligence, and mirror imaging, and offers many unique insights into the process itself. Intelligence: From Secrets To Policy, contains well developed chapters on Counterintelligence, Covert Action, and Ethical and Moral Issues. Mr. Lowenthall also provides the reader with unique appendices that include excerpts from the National Security Act, Executive Order 12333, and a listing of intelligence related web sites. Comprehensive and yet easy to understand, this publication is highly recommended for those of us wishing to examine, or reexamine, the crucial roles of consumer, producer, and analyst, and the ever-increasing importance of feedback in the intelligence cycle.

Published by Thriftbooks.com User , 23 years ago
Mark does it again. He hit a home run with this updated version of his 1992 work. Once again Mark puts a very difficult and most classified subject and turns it into a straight forward, easy to read and to understand volume. This will be the new text book for the graduate and undergraduate students at the Joint Military Intelligence College in the subject of Intelligence Community and will aid in the understanding of the Intelligence arm of the National Security Structure and Process. Well done, Mark!
Trustpilot
Copyright © 2022 Thriftbooks.com Terms of Use | Privacy Policy | Do Not Sell My Personal Information | Cookie Preferences | Accessibility Statement
ThriftBooks® and the ThriftBooks® logo are registered trademarks of Thrift Books Global, LLC