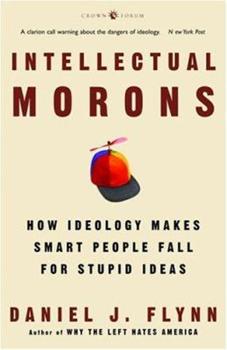 The author of Why the Left Hates America argues that members of the liberal media, as well as the political and academic elite, have become blinded to reality by their identification with and devotion to ideological dogmas. Reprint. 25,000 first printing.

True intellectuals will love this!

Published by Thriftbooks.com User , 14 years ago
Do you ever feel like you are Sunday School when talking to your leftist friends, only Christianity is replaced with some other whacky beliefs? Then this book is for you! Most of the ideologues portrayed in the book are on the left, with some notable exceptions from the right (e.g. Ayn Rand). Thus, some of the negative reviewers criticize the author just on the basis of being on the wrong side of the aisle. Pretty much the attitude the author describes in one of his chapters, whereby the left thinkers promote tolerance - but only towards leftist ideas. Funny how most of the 1-star reviewers here seem to exactly fit the mold of the intellectual morons and their blind followers. In any case, this book is for all of us true intellectuals who are irritated by the radical environmentalists, feminists, and other all the other "-ists." They wouldn't be such an annoyance if they didn't have this aura of intellect around them. People like Ehrlich can be wrong time and time again, their ideas, however, live on in academic circles, not because they are good ideas but because they fit the party-line of anti-capitalism that's so prevalent among so-called intellectuals. By the way, to address the criticism of some other reviewers, contrast that to Rush Limbaugh, another good candidate for an ideologue. At least his books are not required readings at colleges around the country! The book is such a nice read because it very eloquently shows what I already knew: that the same people who ridicule the Christian right as backwards, themselves follow an anti-free-thinking cult that has abandoned reason in favor of ideology. A real page-turner, nicely written with a lot of wit and sarcasm.

The Debasement of the Intellect

Published by Thriftbooks.com User , 14 years ago
Daniel Flynn is a conservative campus speaker, author, and television guest commentator who relentlessly reminds Americans that the greatest threat to America comes from our own Left. In WHY THE LEFT HATES AMERICA, he outlines the historical background of the Frankfurt School that led to Marxism making its initial inroads into the American political and educational arena. And now in INTELLECTUAL MORONS, he picks up a thread that he left partially unraveled from his first book. Flynn sees the "big picture" of the entire spectrum of the Left Democratic Party as being variations of the gender, race, and class dichotomy of classic Marxist thought. Even though Marxism went out of business big time with the dissolution of the Soviet Union in 1991, its adherents were too deeply entrenched in its tenets to so easily surrender an adherence to a system that began as political, but soon enough morphed into non-political areas that Flynn labels as "Communism, environmentalism, animal rights, sexual anarchism, feminism, postmodernism, relativism, deconstructionism," (Page 2) all of which he sees as being championed by those who still carry forth the banner of Marx even if under a slightly modified manner. Flynn notes a definite cross-linking among them all. Those who champion one are very likely to support any of the others. To these leaders-supporters, he suggests that intentions count far more than outcomes. It does not matter if any ideology proves disastrously wrong; what counts is the fervor that each brings to the cause. And the fervor, of course, is based on a selective manipulation of fact to fit an equally selective manipulation of reality. Flynn begins with Herbert Marcuse, a German immigrant who began modern Leftist thought by insisting that toleration from the Left was to be balanced by intolerance toward the right. It is no surprise that Flynn begins with Marcuse, the man who popularized the now all-pervasive notion that Western civilization was instrumental in leading toward the victim ideology that constitutes the core curriculums of our colleges. His following chapters deal with how sexuality became distorted with Kinsey; how environmentalism under Ehrlich morphed into the belief that global warming is the New Armageddon; how animal rights under Peter Singer now trump human rights; how the clear fraud of the third world claims of Rigoberta Menchu even now is hidden from those who do not wish to see it; and how history under Howard Zinn and Noam Chomsky "proves" that the United States was born in racism and grows in racism. Flynn does not omit feminism or literary theory to escape his claims that deliberate intellectual blindness is but the first step on the slippery slope to an intellectual depravity of thought that he terms moronic. And what of the so-called "smart" people who follow such beliefs even against all evidence? Flynn suggests that there is hope for a massive turnaround for those who wish to turn the United State

Published by Thriftbooks.com User , 16 years ago
Remember all the obtuse longwinded authors you were required to read as an undergraduate - after which you quickly forgot about because they seemed not to make any sense? Well here they are again - and guess what? they didn't make any sense! This book is not about Clinton, Kerry or Kennedy - it's not even about Moore, Streisand or Asner. The book is about the morons who inspired them - it's about Marcuse, Fromm and Rousseau - Kinsey, Chomsky and Strauss - Sanger, Rand and Friedan. And as astounding as it might sound - it's a great read! Check out the last line of the Ayn Rand section -- it's a gasser!

Published by Thriftbooks.com User , 17 years ago
I'd never read this author until I saw this book and, intrigued by the title (honestly!), I decided to browse. Several hours later, I was on chapter 4 and cloud 9: this guy can write, and it makes sense! The style is approachable and the points are (almost) un-impeachable: ideology will lead you down the wrong path everytime and I daresay there's not much I can find wrong with his assertions. He describes ideologues as falling into several categories, with Joiners being the largest: those poor souls who heedlessly and unthinkingly swallow then regurgitate (usually in the form of bumper stickers and protest signs accompanied by the Banshee screams of the self-righteous) whatever their trend of choice is, from Abortion Rights to Hyper-environmentalism, take your pick. Highly recommended.

The Inhumanity of Ideology

Published by Thriftbooks.com User , 17 years ago
Unlike other "reviewers" I did read the book. Flynn, through several vignettes, tries to explain modern American culture through the prism of "intellectuals" whose ideas affected our society. The author makes 3 salient points that bear repeating: With the decline of religion, intellectuals increasingly turned to ideology for meaning, the core of ideology is political and, most importantly, ideology values ideas over people. The first chapter brilliantly summarizes Marcuse and "Cultural" Marxism wherein every facet of human existence is politicized. His ideas permeated our culture - from "diversity" wherein the Left was supported and the Right silenced, to identify politics (gay/ethnic/gender group rights) to victimization to anti-Western bias to a redefinition of education. He had particular disdain for old-fashioned liberals like Hubert Humphrey. He was astute, though, in recognizing that the common worker would never accept his ideas and therefore must be "forced" to be free. Elements of violence and authoritarianism are present in all these groups; the "truth" must prevail and violence is necessary for the greater good. This explains the perplexing notion of "liberals" praising despots whole first act would be silencing them or of commentators praising Arafat while condemning Israel. Each ideology seeks Utopia - from an (ir)rational Randian world to Strauss's American Empire to a primitive garden of Eden where humans live in peace with nature and its creatures and have sex without consequences or emotion. The article on Chomsky and his continual excuses/espousing of various events (to this day he denies the Kymer Rouge killed millions of Cambodians) was another tour de force. He emphasizes that the mjority of those in non-academic studies (identity politics) drift into three major areas: Academia, politics and the media.
Trustpilot
Copyright © 2022 Thriftbooks.com Terms of Use | Privacy Policy | Do Not Sell My Personal Information | Accessibility Statement
ThriftBooks® and the ThriftBooks® logo are registered trademarks of Thrift Books Global, LLC