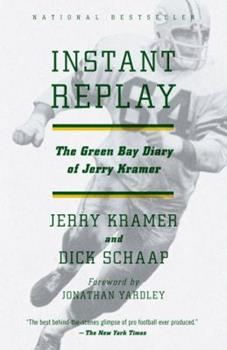 A sports classic, Jerry Kramer and Dick Schaap's Instant Replay takes readers inside the 1967 season of the Green Bay Packers, following that storied team from training camp to their dramatic victory in Super Bowl II. Candid and often amusing, Jerry Kramer describes from a player's perspective a bygone era of sports, filled with blood, grit, and tears. No game better exemplifies this period than the classic "Ice Bowl" conference championship game...

Published by Thriftbooks.com User , 15 years ago
Instant Replay is an essential book for every football fan. The tradition of the NFL and the inside story of the Green Bay Packers in the Vince Lombardi era come to life with a wonderful blend of humor and pro football detail in this great book.

Published by Thriftbooks.com User , 15 years ago
There will never be another great team like the Packers of the 1960's for a number of reasons. The only way to relive this era is through the numerous books that rehash the Lombardi dynasty. This book has to be one of the cornerstones of reliving that era with its candid yet humble prose giving an inside view of the Packer locker room. Jerry Kramer, who resents the 'dumb jock' stereotype of football player, composed a well written memior of football in "Instant Replay". From the days after Superbowl I to Lombardi's retirement after Superbowl II, this book takes readers through the entire 1967 season. Lombardi is known for the grind players were made to endure in his training camps. Kramer tells what the players are feeling as speculation begins that this would be Lombardi's final season coaching in Green Bay. Being the number one target of the NFL after being champion for the last two years makes the regular season a grind. While the Packers did not play their best in the regular season, they turn their game up a notch in the playoffs. Often voted the greatest game in NFL history, Kramer devotes significant time to the Ice Bowl. This is significant because Kramer had a key role in the game and this book marks an early admission that he may have moved a little prematurely. After the Ice Bowl, the Superbowl almost seemed anticlimactic. Two years after the 1967 season, Vince Lombardi died of cancer and many of the pieces of the Packer dynasty were in retirement. This book is a great way to relive the magic of the Packer dynasty.

Published by Thriftbooks.com User , 15 years ago
I read this book when it first came out, ca. 1968, when I was a high school senior in Racine, Wisconsin. I had been a fanatic Packer backer throughout the glorious early and middle 60s, but by 1968, Lombardi was no longer the coach, only the GM (and besides, I was now interested in other things). He would move on to the Redskins for the 1969 season before dying of cancer in the fall of 1970, so INSTANT REPLAY captures the end of an era, his last hurrah as coach in Green Bay. As with another reviewer below, the Packers of the 60s have marked my life, especially Bart Starr, Ray Nitschke, and their leader, the great Coach, and I have always viewed INSTANT REPLAY as the period or exclamation point on my early infatuation with them. Besides its subject matter, INSTANT REPLAY possesses its own literary merit. Kramer is clearly highly intelligent, and since intelligence is not stereotypically associated with the brute violence of the NFL, it's interesting to read his reflections on life in general and life in football, not to mention the ways he perfected his blocking skills. He talks about how his helmet was his best weapon in warding off defensive linemen--which certainly must have done something to his braincells and neck muscles. I also love the running joke about Lombardi's almost-weekly proclamation: "Gentlemen, this is the start of the big push!" as he exhorted the Packers to still-greater efforts in a long painful slog of a season. There's also an interesting description of how the Packers' veteran blockers made a rookie look slow--the vets had played together for so long they anticipated the snap, while the inexperienced new guy waited for it, losing a fraction of a second in the process. And there's a mystery. With third and goal and 16 seconds left in the Ice Bowl, the famous sub-zero championship against the Dallas Cowboys, Kramer states flatly that Starr told the huddle, "31 wedge, and I'll carry the ball." This contradicts the more widely-accepted version, that Starr kept the QB sneak a secret, so everyone thought he would hand off to the fullback. What really happened? I would love to hear Kramer's side of this story. INSTANT REPLAY is a wise reflection on NFL football and its greatest coach at a time when the sport was on the verge of making the transition to the overhyped, fabulously-profitable carnival it is today. For several years after it was published, it was the best-selling sports book of all time. Rereading it, it's easy to see why.

Published by Thriftbooks.com User , 19 years ago
You don't have to be a football fan to enjoy this book. Its a historical read about what football was like in the Lombardi era. It is gives you an inside look at what the players were like, not just on the field, but off. I think this is a must read for anyone who ever wants to know what the Green Bay Packers and football in general was about in the 60's. Its a classic that will live on forever.

Published by Thriftbooks.com User , 22 years ago
Instant Replay, the diary of Green Bay Packer Jerry Kramer is the most engrossing book ever written about football. The reader is pulled into the world of the Green Bay Packers and Vince Lombardi. Kramer reveals to the reader his anger, love, respect, commitment, fear, and courage that surfaces through his experiences with his coaches, family, teammates,and the game of football. Every highschool football player in America should read this book. Kramer reinforces the qualities of sacrifice, determination, and hard work that seem to be lacking in American society today.
Trustpilot
Copyright © 2022 Thriftbooks.com Terms of Use | Privacy Policy | Do Not Sell or Share My Personal Information | Accessibility Statement
ThriftBooks® and the ThriftBooks® logo are registered trademarks of Thrift Books Global, LLC