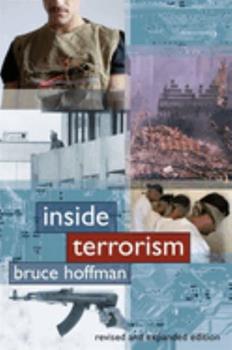 Bruce Hoffman's Inside Terrorism has remained a seminal work for understanding the historical evolution of terrorism and the terrorist mindset. In this revised edition of the classic text, Hoffman analyzes the new adversaries, motivations, and tactics of global terrorism that have emerged in recent years, focusing specifically on how al Qaeda has changed since 9/11; the reasons behind its resiliency, resonance, and longevity; and its successful use...

Excellent one volume introduction to the subject

Published by Thriftbooks.com User , 19 years ago
Bruce Hoffman, long one of RAND's key terrorism-wallahs and an affiliate of St Andrews University has written an excellent book on a controversial topic. There was a fair amount of literature on terrorism prior to September 11th and, my, but there's even more now. A lot of it was a load of old rubbish prior to September 11th and even more of it is now. Hoffman's book is a work of substance which in itself puts it ahead of much of the pack. "Inside Terrorism" covers a variety of areas. It opens with a discussion about the lengthy (and continuing) debate that surrounds the issue of defining terrorism - an issue which has stumped everyone from academics to the UN. What and who exactly IS a terrorist? Hoffman doesn't provide a clear cut, definitive answer but he does provide clear coverage of what is framing the argument, along with some of the possible answers which are being put forward. Whether you consider this level of debate to be self-indulgent and ivory tower or not (as I increasingly do, interesting thought it is) it is important to know that the debate does exist and what it's all about as it goes to the heart of some real-life anti-terrorism policy making, especially with regard to multilateral attempts to curb terror groups. Hoffman moves on to cover Post-colonial ethnic or nationalist terror groups, international terrorism, Religion and terrorism, Terrorism, Media and public opinion, Terrorist methods and mindsets and the potential future of terrorism. All in all, it adds up to a fairly comprehensive introduction to the subject. Some of Hoffman's conclusions aren't to everybody's tastes, but terrorism is an inherently controversial and hotly debated issue, it's the nature of the beast. Overall, this is an excellent overview and introduction to the subject of terrorism. Certainly better than the recent work of Walter Laqueur. The newcomer to the subject would also be well advised to check out Christopher Harmon's "Terrorism Today" as well, along with Paul Wilkinson's "Terrorism and Democracy". Ken Booth's "Worlds in Collision" is an excellent collection of essays by various authors that is ideal for somebody with an interest in the post-September 11th world. Hoffman's writing style is not immediately engaging (I found the book far more digestible on a second reading), but this is still an excellent work for the beginner. In a field that is both crowded and shallow, Hoffman has produced a book of genuine substance and for that he deserves credit.

Invaluable Perspectives Within an Historical Context

Published by Thriftbooks.com User , 21 years ago
For the general reader, Hoffman provides probably the best introduction to terrorism from an historical perspective. It is instructive to view the tragic events of September 11th from that perspective. Terrorists' motives as well as their strategic objectives and tactical means have differed (sometimes significantly) over the centuries. Hoffman does a brilliant job of reviewing and explaining a wide variety of separate acts of terrorism. All terrorists (religious or secular) are extremists. Frankly, I continue to have problems with the term "fundamentalists" because so many historical figures now revered acted upon the most fundamental of principles for which they were prepared to die...and many did. Like heroism, terrorism is in the eye of the beholder. Case in point: those involved with the Resistance in occupied France during World War Two. To his credit, Hoffman presents the material with great precision but without bias. It remains for each reader to formulate value judgments. Especially now, this is a "must read" for those of us who struggle to understand events on a recent Tuesday.

Thorough and enlightening look at trends in modern terrorism

Published by Thriftbooks.com User , 22 years ago
Bruce Hoffman offers a fascinating and enlightening examination of the confusing nature of modern terrorism. I especially enjoyed the opening chapter on the toils of anyone trying to lay down a definition of the word "terrorism" itself. Overall, it is a must read for anyone trying to make heads or tails of today's "new-generation" terrorism. I strongly recommend it!

Published by Thriftbooks.com User , 22 years ago
I found "Inside Terrorism" being a highly comprehensive as well as a very informative book. Since this book was my first contact with the topic "terrorism" I was quite surprised how easy but nevertheless detailed Hoffman introduces the readder to this complex subject. Although one might think that is a boring book, it is everything but boring... believe me, I'm a student and I know a LOT about boring books

If you read the paper or watch the news, READ THIS BOOK!

Published by Thriftbooks.com User , 24 years ago
I found Inside Terrorism extremely readable, yet with the obvious authority of high quality research. Hoffman draws in the reader with skill I rarely see in nonfiction writing. This extremely complex issue so often in the forefront of today's world is dealt with in a unique yet straightforward manner. This is a 'must read' for anyone that travel, reads the newspaper or watches the evening news.The initial chapter on 'defining terrorism' helped me start to extract from the media over-usage of this term, the relevant issues that differentiate 'terrorism' from other forms of violence. The evolutionary nature of the term is profiled showing the historic development of what is now seen exclusively in a pejorative sense. Understanding the background, historic development and indeed, the elements that makeup the essentials of terrorism, will allow the reader to evaluate the news from an informed, rather than agenda driven position.Having provided an understanding of what the real issues are, the author moves the reader through the various types of terrorism, explaining them in adequate but not suffocating detail. Like an NFl highlight film, the reader is taken through a historical framework that keeps the readers interest while exploring the salient points. The examples read like the Sunday paper as the vivid reality jumps out at you. There is a feeling of 'insider information' without the talk show hype. This provides at last, a basis for real understanding of the frequent news stories that become such a blur of tedious detail.This book went much futher than a historic recount of terrorism. While dates and incidents are included, they serve as interesting and helpful examples of the issue and don't become a tedious history text. Particularly interesting to me was the description and explanation of the different ideological styles. Left and right wing, ethno-nationalist, millenarian, separatist and religious motivations are unraveled in a systematic and clear manner. Similarities and differences are made evident and the importance of these aspects become clear.In Short, this book dealt with a complex and confusing issue in a way I could understand, remember and use when I read or listen to the news.
Trustpilot
Copyright © 2022 Thriftbooks.com Terms of Use | Privacy Policy | Do Not Sell My Personal Information | Cookie Preferences | Accessibility Statement
ThriftBooks® and the ThriftBooks® logo are registered trademarks of Thrift Books Global, LLC