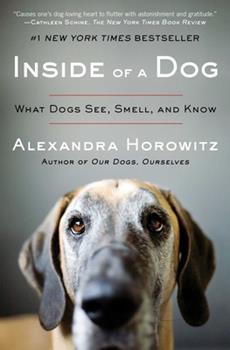 Inside of a Dog: What Dogs See, Smell, and Know

The bestselling book that asks what dogs know and how they think. The answers will surprise and delight you as Alexandra Horowitz, a cognitive scientist, explains how dogs perceive their daily worlds, each other, and that other quirky animal, the human. Horowitz introduces the reader to dogs' perceptual and cognitive abilities and then draws a picture of what it might be like to be a dog. What's it like to be able to smell not just every bit of open...

Helped Me Understand My Dog

Published by Adella , 1 year ago
This book was such an interesting read! It helped me to understand my dog more and I would recommend it to any dog owners out there! I think this area of study is fascinating and should be explored further. Dogs have so much to offer us!

Published by Thriftbooks.com User , 12 years ago
I'm shocked this got some less than wonderful reviews - I loved it! Well written, easy to pick up for a few minutes at a time, and just as easy to cozy up with the book for a few hours. I'm going to hang on to my copy and reread it in the future. Don't forget to mark interesting reference spots if you're thinking of owning a dog and want to remember specifics.

Published by Thriftbooks.com User , 12 years ago
This is a wonderful book for dog and their owners. Even if you have lived with and loved dogs your whole life, as I have, you will learn an enormous amount about their behaviour, motivations, and inclinations. This is a serious book based on science and observation, and it is fun to read.

It's a Dog's World

Published by Thriftbooks.com User , 12 years ago
Scientifically, we might know a lot more about rats than we do about dogs. There are some experimental labs that have dogs as subjects, but lab rats get a lot of scientific attention. Dogs get a lot of domestic attention, but scientific study of dogs, and the ways they get along with humans and with other dogs, has not been a high concern. That may be because we think we know dogs; they are frank and open, and we live closely with them. Alexandra Horowitz thinks we don't know enough, and some of what we know is wrong, and she is out to change our perception of dogs and to do it scientifically. She has to work at making herself a detached observer; she might be a psychologist who has studied cognition in humans, dogs, bonobos, and rhinoceroses, but among the first sentences of her book _Inside of a Dog: What Dogs See, Smell, and Know_ (Scribner) is, "I am a dog person." Is she ever. She didn't deliberately make Pumpernickel, her mixed breed live-in friend (she is an advocate for adopting mutts), a subject of scientific study, but Pump was her entrance, for instance, to the dog park where she could film the interactions of other dogs for acute detailed study later. She gives loving anecdotes of the late Pump in every chapter to illustrate her more objective findings, nicely showing how her scientific examination of dogs paid off in her understanding of her own dog. There are people who worry that scientific examination of any phenomenon takes away the mystery and specialness of the phenomenon, and among the fine lessons in this amusing and enlightening book is that this is far from true. Dogs do not sense the world we do. To take one of Horowitz's examples, a rose for humans is a thing of visual and olfactory beauty, and also has connotations of a love gift. Dogs are having none of this. It is just another plant among all the plants that surround it; it does not look attractive, and unless some dog has urinated on it recently, it does not smell attractive. Otherwise, the rose doesn't exist. The dog's world is one largely of smells. Everyone knows that dogs are better at detecting odors than we are. It isn't just that they can smell more scents, at thinner concentrations, than we; it's that they gaze at the world by sniffing, and it presents a very different world from ours. Smell, for dogs, has plenty of meanings, but one of them is time. A strong spell is new, a fading one is old. Not only that, but the future may be borne on a breeze if the dog is walking upwind. In scents, the dog doesn't just experience the current scene in an olfactory way, "...but also a snatch of the just-happened and the up-ahead. The present has a shadow of the past and a ring of the future about it." Dogs are evolutionarily descended from wolves, and sometimes dog owners are advised to treat their dogs as lower-caste members of a pack. Horowitz prescribes caution in such interpretations. Dogs are not wolves and have cast away many wolf traits dur

Published by Thriftbooks.com User , 12 years ago
This is a fascinating book, full of terrific details and interesting research about dogs. So many of the specific elements that she describes still stick in my head. There's great material in here, for instance, about dog's noses and how they smell, and how much they encounter the world through scent and odor. It's not simply that Horowitz tells us that dogs have a powerful sense of smell; it's that she goes well beyond that to help us think about how different their sense of time must be, for instance, since they are smelling old smells along with new ones at the same time. That's just one example of many. The book is chock full of the latest research about dogs, but told in a winning and delightful manner. That's worth stressing: the writing in this book is great. It's colorful and idiosyncratic. Sometimes the syntax of a sentence is intriguing all on its own. The book is fun to read, in part, just because Horowitz writes so darn well. And, I should add, with a fair bit of whimsy and playfulness. She is a talent as a writer, as well as a scientist. And she makes the science accessible, interesting, and sometimes laugh-worthy. But the book is also wonderful because it's so full of Horowitz's own enthusiasm for how great dogs are. She's a scientist, but she's hardly clinical. Her excitement about dogs comes pouring out in the small praise-of-dog moments that abound in the book. I feel like I finished the book not only knowing more about dogs (and impressed by all the things that Horowitz knows), but wanting to spend more time with dogs, looking at other people's dogs on the street, and thinking about when we might be able to get a dog of our own again. Her interest in the dog-human relationship -- which is so much the focus in the last chunk of the book -- spills over with her joy in it, and it's an infectious joy. I can't recommend this book highly enough. I plan to give it as a gift this year to all my dog-owning and dog-loving friends!

Published by Thriftbooks.com User , 12 years ago
As an avid reader of dog literature I approach each new entry in this field with a mix of trepidation and eagerness. Will it merely be a rehash of things I already know? Will it be a sophmoric jumble of memoir and whimsy? Or will this be the book that truly broadens my understanding of the world of canids? Inside of a Dog falls into the last category - plus some. This book is hands down the finest exploration of canid intelligence that I have ever read. Horowitz writes with a crisp, almost puckish tone - it draws the reader in effortlessly. The book is a delightful blend of an examination of the latest developments in the world of scientific study of dog cognition, and Horowitz's own experiences with her dog as she became one of the scientists who study this animal. She is one of those writers of whom you think that they could make anything seem interesting. It is to our benefit that she has chosen to do this with dogs.

Inside of a Dog: What Dogs See, Smell, and Know Mentions in Our Blog 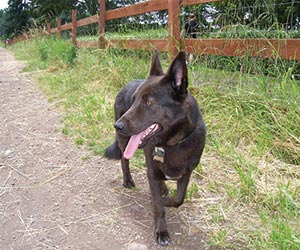 Ushering in 2018 - The Year of the Dog: How to Regain Your Zen and Stop Worrying About Your Dog
Published by Linda Vandercook • December 02, 2017