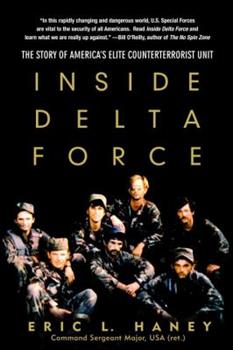 Inside Delta Force: The Story of America's Elite Counterterrorist Unit

Now the inspiration for the CBS Television drama, "The Unit." Delta Force. They are the U.S. Army's most elite top-secret strike force. They dominate the modern battlefield, but you won't hear about their heroics on CNN. No headlines can reveal their top-secret missions, and no book has ever taken readers inside--until now. Here, a founding member of Delta Force takes us behind the veil of secrecy and into the action-to reveal the never-before-told...

Published by Thriftbooks.com User , 15 years ago
"Inside Delta Force" is the basis for the current CBS David Mamet series, "The Unit." While the show is entertaining, the book is impossible to put down. If you are a fan of recent military history, or are curious as to how this most elite special ops unit came into being, I recommend this book. Ignore the politically motivated trolls who are too cowardly to use their own names; they clearly haven't read the book at all and are simply responding to an interview in which Haney expressed criticism of the Bush administration. Pretty pathetic. Read the book for yourself, then decide.

My friend and fellow soldier ERIC wrote this book!

Published by Thriftbooks.com User , 17 years ago
My friend, Eric L. Haney, Command Sergeant Major U. S. Army (Retired), founding member of Delta Force, wrote the book "Inside Delta Force"! Before Eric joined the U. S. Army Rangers, he and I served together in A Company 2nd Battalion 41st Infantry 2nd Armored Division (HELL ON WHEELS) 75 -76. As Soldiers we were ready to die for the United States of America. As well as for each other! (Only those who have served together can understand such a statement.) Eric's book tells of the hardships and sacrifices that men of his caliber make for this country and their friends. I am extremely proud to have a friend such as Eric! I highly recommend his book to anyone who has served, or wants to know what our military has done and still does today in the defense of our Nation! "Freedom has a special meaning to those who have fought for it that the protected will never know." Robert F. Heinrich Master Sergeant U. S. Army - 63 - 87 (Retired)

Published by Thriftbooks.com User , 18 years ago
"Inside Delta Force" is a well-written book of interest to people who want to know about the military men who achieve national objectives for the US Government, and the ways they do it. Of course, the author has left out or obscured many details of his story - if he hadn't, he might be in jail or dead. For a student of the "secret" history of the US, two parts of the book stand out:* Haney claims that prisoners of war were deliberately left in Southeast Asia after the Vietnam War, and that a planned Delta operation to rescue them in Laos was aborted after Bo Gritz's grandstanding in the early 1980's. He attributes this to unnamed politicians and bureaucrats who wanted to avoid embarassment and forget everything (and everyone) about Vietnam. * Haney says that he believes a "guerrilla leader" that he killed in Honduras was actually working for the US government, and identifies him as a fellow soldier who participated in Delta Force selection with him. He also makes allusions to the CIA's supposed involvement in drug smuggling in Central America during the 1980's. It's clear that these experiences and others have affected his perception of the US government, and the book benefits from his skeptical perspective. Recommended!

Published by Thriftbooks.com User , 18 years ago
This is a book of two halves - the first half is worth 5 stars, the second is worth only 4. Not because of any change in writing style, but because the author had to be less detailed (operational security rules), and because the 2nd half left a bad taste in my mouth (more on this later).I should state right here that I am not an American, and therefore feel no "patriotic feelings" when reading a book like this. However... I am filled with admiration for people who can live this kind of life, irrespective of nationality. I have read several books on Secial Forces, and was very impressed with the dedication of these particular operators! They all appear to be men of honour and integrity - no Rambo BS, and no physco .... I found the section on "Selection" interesting, but no different to many similar books on the SAS. The section on operator training, on the other hand, was fascinating! I cannot imagine the dedication required to clear a room (with hostages)in 3 or 4 seconds, and the explanations of the training required to do this was incredible. Fantasticing read so far!Now onto the 2nd half... obviously the author couldn't go into too much detail about any specific operations, so this section is not as detailed as the first half of the book. This made for good (4 star) reading, but still left me wanting more! I found the second half of the book fairly disconcerting, though.... not through any fault of the author, but rather because of the nature of the operations, and how seldom the operators actually KNEW exactly what they were doing. Maybe I felt this more as a non-American.... the U.S clearly has the most powerful military force around, and we would all like to think that when they deploy it is for a good reason! Not all that long ago there was another country with an awesome Army that was "directed" by lunatics.... WWII was the consequence. I am not suggesting that the people runnning the US are anything like Hitler, just trying to explain why I feel it is so necessary for the people directing any powerful military force to have GOOD reasons for sending troops into action.There are a number of missions described in this book where you get the distinct impression that the CIA and/or politicians where using Delta to further their own selfish ends rather than because the US had any moral right to be involved in the situation. This left me feeling distinctly dirty.... these honourable men were getting "used", and often hurt/killed, to perform what was basically a dishonourable mission. I had the strong wish that some U.S President would have the guts to say to Delta "OK, we have these ...politicians and career-minded paper-pushers who are actually hurting the country more than any terrorist- take them out!!" Reading this made me feel angry... the Delta operators deserve to get their orders from people of higher integrity....On the whole, I recommend this book highly - it's good to know that there are people like this defending the planet from bad
Copyright © 2020 Thriftbooks.com Terms of Use | Privacy Policy | Do Not Sell My Personal Information | Accessibility Statement
ThriftBooks® and the ThriftBooks® logo are registered trademarks of Thrift Books Global, LLC