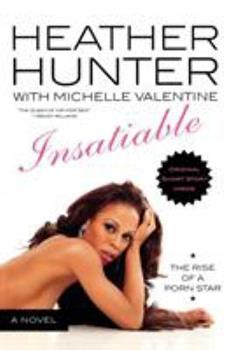 by Michelle Valentine and Heather Hunter

Published by Thriftbooks.com User , 15 years ago
This book was good from beginning to end. Not going to reveal anything. Just buy the book.

Published by Thriftbooks.com User , 15 years ago
Adult film start Heather Hunter has released her first fiction novel. Insatiable is a 300+ page novel in which Heather writes about a fictional character named Simone. The novel chronicles Simone's early years in New York and her voyage into the world of adult entertainment. Many people reading the book may think its an autobiography due to the fact that the pages of the books are adorned with beautiful pictures of Heather Hunter. Although Heather's image (fully clothed) appears on the pages in the book, the book is not an autobiography, it's fiction. Fans of urban fiction will identify with the colorful street language. The intimate scenes in the book are very descriptive and there are many sexual buzz words in the book. This is a book that the lighthearted might find themselves peaking at the pages due to the nature of some of the content. The book leads us through Simone's graffiti tagging teen days, to her early sexual experiences, and of course one thing leads to another. It's a very exciting story as Simone finds herself in one situation after another, without giving away too much of the story at one point she even finds herself in a hotel room with a dead man and drugs. The descriptions of Simone's time working in strip clubs is quite descriptive. So much happens in this book it could literally be two books. It's a book that you might have to digest in bits and pieces due to all of the action but it won't disappoint fans of adult entertainment and urban literature.

Do You Love Yourself?

Published by Thriftbooks.com User , 15 years ago
INSATIABLE is the fictionalized story of a young woman and her rise as one of the most sought-after African-American female porn stars. Simone decided before she ever finished high school, she wanted out of her mother's house. Feeling her mother would never support any of her endeavors, she figures out a way to move in with her close friends. She starts trying to make money by selling her body, and it isn't long before she is stripping in Atlanta. However, when a featured headliner at the strip club tells her she is a natural for porn, life for Simone completely changes. Life as a porn star results in easy money for Simone, but it also brings loneliness and moments of self doubt. She finds herself wondering, like in the Deborah Cox song, 'How did I get here?' After being swindled, used and just tired from the partying and drug use, Simone must make a decision to change her life. The question is whether she loves herself enough to do so. Although this is a fictionalized account of Heather Hunter's life, it is a good mirror of her experiences as Simone, the main character, was tested as she searched for enduring love, sought praise from her mother, inner peace and the ability to prove to others she is more than a sex star. The message is clear and I love that Simone recalled her mother stating education is the key to a better life. I love that random people asked if she loved herself. I love this is a cautionary tale, because although the ending is smooth, it isn't perfect and readers will recognize Simone still has room for continued growth. The pacing of the story was fine and the flow of the tales in Simone's life were easily chronicled. There was a good dose of hedonism with behind-the-scenes look at the adult porn industry and exotic dancing. Not all the characters were developed, but they were essential in recounting Simone's journey. Those familiar with Heather Hunter will also find enclosed many pictures of the star, which for some chapters highlighted the mood of the fictional character. INSATIABLE brought to life an industry that most of us have never understood and have judged, but it also gave a human understanding on how a young person can find themselves looking for easy money to compensate for the lack of self love. Reviewed by Cashana Seals of The RAWSISTAZ Reviewers
Trustpilot
Copyright © 2022 Thriftbooks.com Terms of Use | Privacy Policy | Do Not Sell or Share My Personal Information | Accessibility Statement
ThriftBooks® and the ThriftBooks® logo are registered trademarks of Thrift Books Global, LLC