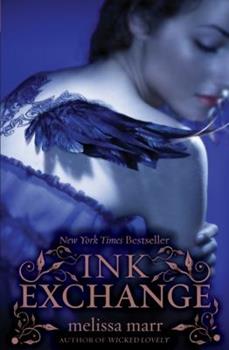 (Book #2 in the Wicked Lovely Series)

The second installment in Melissa Marr's #1 New York Times bestselling Wicked Lovely series brings readers back to the land of faerie and delivers another stunning, high-stakes romance.Unbeknownst to mortals, a power struggle is unfolding in a world of shadows and danger. After centuries of stability, the balance among the Faery Courts has altered, and Irial, ruler of the Dark Court, is battling to hold his rebellious and newly vulnerable fey together...

Published by Thriftbooks.com User , 14 years ago
I enjoyed Wicked Lovely, but it wasn't the best book I had ever read. However, I chose to give Ink Exchange a chance, and I am so glad that I did. I loved this story. My heart broke for all of the characters, especially Irial. He was so well written, that you find yourself falling in love with him despite the fact that his actions are at times, truly evil. I was touched by his humanity so to speak, as well as his selflessness towards Leslie. Leslie is an especially heartbreaking character. And yet, though she is flawed, I felt that she demonstrated true strength in conquering her addiction of Irial and overcoming her tragic past. Then there is Niall, poor noble Niall. His torment seems never ending. He not only suffers from a haunting past but a grim future to boot. If only he could have his heart's desire. While many may shy away from dark and dreary plot lines, I found the read rather beautiful in its rawness. And while the ending was far from a happy ending, I felt content with its conclusion. So, if you enjoyed Wicked Lovely, you should definitely read Ink Exchange and even if you didn't, give it a try. It's delicious.

Published by Thriftbooks.com User , 14 years ago
I read this title in less than a day, I wouldn't move from my bed until I finished! The characters are different and more believable than anything you'd find in Twilight. Melissa Marr has a fresh and appetizing way to introducing and keeping us in the world she has created. It's dark and forbidden and keeps me thinking about the book long after I've finished.

Published by Thriftbooks.com User , 14 years ago
Ink Exchange wasn't quite as good as Wicked Lovely, but it was still highly readable and addictive. I think the thing lacking in the second book was deep character connection. I felt like I knew the characters in the first book better than the ones in the second book which isn't a huge problem, but I think that if anything could be improved in Ink Exchange, that would be the one small thing I would fix. Other than that, the rest of the aspects of the story were on par with the first book and I finished it satisfied. In Wicked Lovely, some of the details of the other faery courts were skimmed over and this book gave us an opportunity to look at the dark faery court from a different view point; the view of someone who has no idea what she is getting herself into. I think the best part about the book, for me, was how all of the tattooing tied in. I've never thought about getting a tattoo myself, but after reading about the whole art and history of it, I think I have a deeper understanding of what drives people to permanently mark their bodies. I would never go through with it as I have a very low pain thresh hold, but I like the idea of claiming your body as your own, as Leslie did. I think Melissa Marr put a lot of effort in to that part of the book and it definitely paid off. I was a teensy bit disappointed by the ending of the book, but I think the contrast of the endings between Wicked Lovely and Ink Exchange was needed and overall, the end fit the book; even if I didn't particularly like how things were tied up. I am looking forward to a possible third book because there is one (maybe two) faery court(s) that haven't been told about yet, and I think the last one, Sorcha's court, should be the most interesting of all. Let's cross our fingers that a third book is one its way!

Published by Thriftbooks.com User , 14 years ago
17-Year-old Leslie faces many troubles at home, from her drug-dealing brother, to her ignoring father...I could from here on out vaguely describe to you the entire plot of the story, but I'll choose to end it there. Melissa Marr's INK EXCHANGE isn't a novel about prancing faeries who grant you wishes and lure you to hidden meadows. It dwells in the depths of addiction, betrayal, the choices we are forced make, and the consequences. It is the story of a troubled teenager, who is given the chance at bliss. Of not having to worry about the dangers of the world, not having to fear anything, but at a cost she doesn't understand. It shows us the uglier side of life, the darker side of magic. This book will claw at your emotions, it will make you uncomfortable, make you cringe, and you will still manage to sigh in scenes of epic romance. I would like to make something clear for those who expect something as light and friendly as Melissa's debut novel WICKED LOVELY. This isn't about dancing summer fey and blissful romance. This novel is shrouded in it's own dark themes and dangerous romances. This is to be treated as it's own novel, not a sequel to WICKED LOVELY. In it's own way this novel is beautifully sinister.

Just as amazing as the first, if not more!

Published by Thriftbooks.com User , 14 years ago
Leslie has led a troubled life ever since her mother walked out on her family. Her father has turned to alcohol and can't be depended on to do anything like paying the bills unless he's in a good mood. Her brotherRen has turned to drugs, and unfortunately, hanging out with than crowd under the influence has caused horrible things to happen to Leslie. But Leslie is so ashamed and tries to hide it. She refuses to tell her friends and works as a waitress so she can pay the bills. She feels trapped inside her life. Release comes in the form of a tattoo, only Leslie doesn't know that it's just another trap. She sees the tattoo as a way of finally claiming her body as her own, as a symbol of taking over her life. What shedoesn't know is that Irial , the king of the Dark Court, is forging a bond between the mortal and faerie world in order to gain nourishment for his court. Leslie stilldoesn't understand until she is forced into Irial's world. Throughout the novel, Leslie experiences attraction for two different faeries who both like her too. Unfortunately, both those faeries, Niall andIrial , have a sort of drug inside their skin that makes them addictive to mortals such as Leslie. Niall's job is to protect Leslie from the faerie world, so he's not allowed to get close to her; in fact, it's forbidden byAislinn, the Summer Queen and friend of Leslie. Irial on the other hand, does not expect to fall for Leslie, but after spending so much time, he realizes that he loves her. In some ways, Ink Exchange was just as confusing as Wicked Lovely, also by Melissa Marr. However, if you get into the book, it becomes easier to understand. This novel is primarily in Leslie's perspective, although there are sections told from with Niall's orIrial's point of view. The characterization is amazing, and although none of these three characters were very developed in Wicked Lovely, I felt that I had read about them for a long time. The plot is filled with so much emotion, but not to the point that I started crying. Ink Exchange is a beautiful story about the choices you make, how they affect your life, and how you can live with them. I definitely recommend every fan of Wicked Lovely and other faerie books rush out to buy Ink Exchange at the end of April or pre-order a copy now. And if you haven't yet read Wicked Lovely, go do so now before Ink Exchange gets published. This is definitely one of my new favorite books, and one I will recommend to everyone.
Trustpilot
Copyright © 2022 Thriftbooks.com Terms of Use | Privacy Policy | Do Not Sell or Share My Personal Information | Accessibility Statement
ThriftBooks® and the ThriftBooks® logo are registered trademarks of Thrift Books Global, LLC