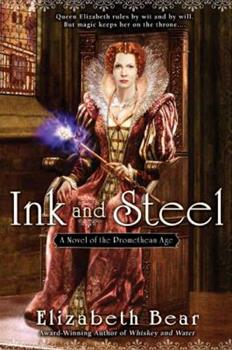 Ink and Steel: A Novel of the Promethean Age

Kit Marley, playwright and spy in the service of Queen Elizabeth, has been murdered. His true gift to Her Majesty was his way with words, crafting plays infused with a subtle magic that maintained her rule. He performed this task on behalf of the Prometheus Club, a secret society of nobles engaged in battle against sorcerers determined to destroy England. Assuming Marley's role is William Shakespeare - but he is unable to create the magic needed to...

Published by Thriftbooks.com User , 12 years ago
This was an amazing reading experience. I love Elizabeth Bear's writing, but to have her take on Shakespeare was like a dream come true. I just can't get over all the ways that she wove the biography and works of Shakespeare and Marlowe into this rich alternate view of the late Elizabethan period. I can't decide what to read next -- the sequel, A Midsummer Night's Dream, or Edward II! Disclaimer, I'm a history buff and a trained literary scholar; I was familiar with a lot of the history and literature behind this book already (heck, my master's thesis is on Romeo and Juliet). But while that definitely affected my reading of the book, I don't think it was necessary to have that background in order to enjoy the novel. YMMV

Published by Thriftbooks.com User , 13 years ago
Ms. Bear's prose is utterly beautiful and suits this Faerie story perfectly. But - these are NOT the fairies of fairy tales, these are the strong-minded, wilful, and (when necessary) vicious, inhabitants of a parallel universe, where time flows at a different rate, but whose borders with our own (or in this case, Elizabethan) world are blurred. The adventures of Christopher (Kit) Marlowe (tragically, but not permanently, dead), along with a certain Mr. Shakespeare, and a cast of dubious supporting characters, faeries, goblins, lunatics, queens (real and faerie), lords, ladies and assorted low-life, are an absolute treat. You could read the books just for the elegant poetic prose, which envelops you and the story with a style that is perfect - and then, almost as a bonus, you have this well plotted, intriguing, and surprising tale. Highly recommended for anyone who has enjoyed Mary Gentle's alternate worlds of Ash, or the harder works of Ursula Le Guin, as well as the wonderful world of Neal Stephenson's baroque trilogy.

Published by Thriftbooks.com User , 13 years ago
Bear is the best writer in SF & F, and regardless of what the litr'y Establishment thinks, Speculative Fiction is the most demanding of all genres. No Literary writer, one suspects, would have the nerve, the chops or the soul to write a book that is a love story between Marlow and Shakespeare, much less throw Morgan le Fey and her son into the brew, but that is just one of the major themes Bear mixes into this wonderful book. Wonderful means "full of wonders." But to me, the best part is the reality, effortlessly created (or so it seems) that can bring Will's wife Annie to life as a breathing character whose motivations and obligations ring true to life. All the other characters are equally vivid and real. And the speech in the mouths of these people also is fluid and true and emotive. Mark Twain studied for years to recreate Elizabethean dialogue. For my money, Bear does it better. Pretty good company, don't you know. And the real reason that the Establishment ignores SF & F? They probably can't stand the comparison. Bear and her peers are creating a Golden Age of literature.

Love is not love which alters when it alteration finds

Published by Thriftbooks.com User , 13 years ago
This is the sort of tightly-interleaved story that I have come to expect, and I have the next one on pre-order so I will get it in three or so weeks, because yum. Let's see how much I can say without spoiling the whole series to date... This is a story about the different burn rates of love, and how love is not love which alters when it alteration finds. This is a story that sets up the previous two books perfectly. This is a story that makes me want to go back and read Shakespeare's sonnets, which is NOT my usual impulse, but now they have a sort of compelling narrative structure. Fanon affecting the reading of the canon. This is a story that describes my version of Hell, and perhaps owes something to The Great Divorce. This is a story with hot sex in a variety of configurations. This is a story that made me think about the problems of dangerous childbirth as it affected the decisions of married people, which I had never really thought through, before. This is a story where words are almost the only currency, and the violence all circles around silencing and ownership. This is a lousy story to start on a Sunday evening if you were planning to be a civilized person on Monday.

Published by Thriftbooks.com User , 13 years ago
While Ink and Steel is part of the Promethean Age series, it's a great place to begin. I found it more accessible than either Blood and Iron or Whiskey and Water, the two earlier books in the series set in modern times. The Prometheans are magicians, politicians, and spies working to influence the course of England's history. Christopher Marlowe -- aka Kit Marley -- writes magic-infused plays under the direction of Francis Walsingham, Queen Elizabeth's spymaster. However, the Prometheans are splintering into factions, and one of them has decided that Kit is a liability. Kit's ignominious death leaves the Prometheans without their playwright. The young actor Richard Burbage suggests they recruit Kit's friend and roommate, Will Shakespeare. Meanwhile, Kit awakens in Faerie under the care of Morgan le Fey and learns that his service is to be transferred from Elizabeth to her sister queen, the Mebd. He will live forever in the Faerie court, able to return to the iron world for only a few days at a time. And return he must, because Will is in way, way over his head. Together, Will and Kit are going to have to navigate the undercurrents of both queens' courts to learn who's working to thwart the Prometheans from within -- who is, in other words, trying to bring down Elizabeth, and by extension the Mebd. English lit geeks: get thee to the bookstore! You are in for a rare treat. Bear lovingly brings Elizabeth's court to life, weaving fact and fiction into a wide-flung net of Promethean conspiracies: plagues, murders, illicit affairs, secret letters written in lemon juice and passed through Faerie mirrors. The cast includes not just Marlowe and Shakespeare but Jonson, Spenser, Nashe, Dekker, and half a dozen lesser known poets and playwrights; the entire Shakespeare family, Burbage and his players; Walter Raleigh, Robert Devereaux, and Edward de Vere; and Elizabeth herself. As in the lovely film Shakespeare in Love, we get to see these luminaries as real people, tramping through London's mud, suffering from fevers, battling stage fright. There are so many things here to love. I laughed myself silly over the sly jokes and innuendo in the letters Will and Kit write one another, and the hilariously snarky dialogue between them and their fellow poets. Kit's posthumous misadventures in London are great fun, as are Will's attempts at skullduggery. But the real fun begins when Kit brings Will to Faerie. Don't forget to pick up Hell and Earth as well, since these two books are really one novel that had to be divided due to its length. Despite that, the story ended far too soon. I wanted to remain in its world even longer, and had to content myself with flipping back to page one and starting again.
Trustpilot
Copyright © 2022 Thriftbooks.com Terms of Use | Privacy Policy | Do Not Sell My Personal Information | Accessibility Statement
ThriftBooks® and the ThriftBooks® logo are registered trademarks of Thrift Books Global, LLC