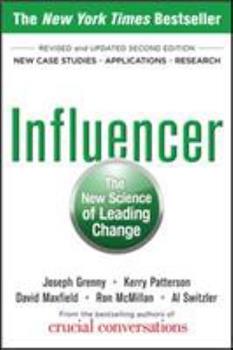 CHANGE YOUR COMPANY. CHANGE THE LIVES OF OTHERS. CHANGE THE WORLD. An INFLUENCER leads change. An INFLUENCER replaces bad behaviors with powerful new skills. An INFLUENCER makes things happen. This is what it takes to be an INFLUENCER. Whether you're a CEO, a parent, or merely a person who wants to make a difference, you probably wish you had more influence with the people in your life. But most of us stop trying to make change happen because we believe...

Published by A. Sharp , 1 year ago
I purchased this as an audio book and am going to have to get a hard copy. I don't want to sound like a PR add for the book but it can make a difference in how you go about resolving difficulties in your personal as well as professional life. I have been telling my adult students about what I have learned and challenged them. To some it feels like cognitive behavior mumbo jumbo but the reality is that if we don't change behaviors we should not expect to get a different result from our past results!

Influencer not about quick fix, but making change stick

Published by Thriftbooks.com User , 14 years ago
I am often struck at how easy it to want a "quick fix" when there is a problem. I have also noticed how these quick fixes can many times lead to resolving one situation but creating problems in other areas. This book is about how to get ahead of the desired change and to think broadly about all the issues that need to be considered in advance. The authors studied successful changes and then worked backwards to figure out what worked. They devise a very logical model that addresses every facet that could be a pitfall. After reading this book I met with a client who was trying to put forth a new procedure in the organization. We used this model and together worked through several concerns that would have sabotaged the impending change. I am also involved in a new effort within my church to study poverty in our area and what can be done to combat this issue. This process will certainly figure in my thinking around this serious issue. Make no mistake, this book is not a "just add water" quickie process. Instead, it is about a strategic methodology that forces one to stop and consider how to avoid planting an unintentional minefield. It also occurred to me that this could be a good "post mortem" tool to step back and evaluate any completed project or major effort to expand the thinking about what worked and what didn't. The model would be a good tool for an organization that is involved in continuous learning.

Published by Thriftbooks.com User , 14 years ago
This book delivers. Its central theme is that the ability to influence is governed by a set of 12 skills. Like any other skills, these can be improved by examination, thought and proper practice. Some people may find themselves influence experts in some situations, but woefully lacking in others. A person wishing to improve his or her influencing skills can use this book to identify what's lacking, what is strong, and what needs shoring up. Plentiful, to-the-point examples illustrate how various people and organizations have focused on the 12 skills to influence the real world. For me, the most inspiring case study involved the fight to eradicate the guinea worm, a horrible parasite that's been methodically driven to extinction in several countries--but remains a menace in others. The book shows how the doctors, caseworkers and community members successfully used the 12 influencing skills to get people to filter their drinking water, stop hiding infestations, etc. For countries that are still not free of the parasite, the book discusses which areas of influence have yet to reach the people, and what other strategies can be employed. This is the sort of influence that humanity needs. Here's hoping that we can destroy this devastating parasite once and for all. Note that the same 12 skills come into play whether one wishes to influence oneself or others. Another case study involved a man who wished to influence himself to lose weight. I can't say enough good things about this book. It's very well written, gets its points across, and is a great read. Highly recommended.

Published by Thriftbooks.com User , 14 years ago
Influencing people isn't easy. This book looks at several influence success stories, including an Indian bank specializing in micro loans, reducing AIDS in Thailand, eradicating the guinea worm, and an environment that changes criminal behavior, and analyzes why they were successful. It's a compelling study of human nature and why people do the things they do. I learned a lot, and will be able to apply some of it to my everyday life. But if you're in management, politics, or any sort of position where you need to deal with people, this is a must-read. Do these techniques work? Look how many folks have reviewed this book prior to publication. Read Chapter 8 to find out why they have.

Published by Thriftbooks.com User , 14 years ago
The main thesis of this book is fascinating to contemplate. In essence, it is that nearly all ways used to try to get people to change serious and deeply ingrained behavior such as overeating, drug use, smoking and repeated criminal acts are at best pointless and in many cases counterproductive. You learn of examples of organizations that have found ways to cure people of these behaviors where the methods are really not that complicated. No massive amounts of money are expended, no high political rhetoric and no great national political mission is cited as a motive. The examples are interesting and include: *) The international effort to eliminate the guinea worm parasite, a terrible disease where people ingest the larva of the worm. Once the worm reaches adulthood, it literally bores its way out of the body and deposits its eggs. *) The effort to get sex workers in Thailand to insist that their clients wear condoms during sex, thereby preventing millions of new cases of HIV infection. *) The effort to get hospitals to recognize that approximately 100,000 people die in the United States each year in diseases caused in part by their hospital stay. Once the problem was recognized, take realistic and effective steps to prevent them. *) An organization in San Francisco with an amazing record of turning people with extensive criminal records and a history of drug use into productive and valuable citizens. In reading this book, you are struck with how simple these solutions are. It is also clear why so many government programs such as "the war on drugs" are so ineffective. They are efforts based on the political flavor of the moment and few in power seem willing to consider counterintuitive solutions that involve political risk. This is a book that contains a great deal of material that would be valuable to counselors, community agencies, dieters and people in human resources. Anyone who deals with behaviors that can damage the individual and society should read it.
Copyright © 2020 Thriftbooks.com Terms of Use | Privacy Policy | Do Not Sell My Personal Information | Accessibility Statement
ThriftBooks® and the ThriftBooks® logo are registered trademarks of Thrift Books Global, LLC