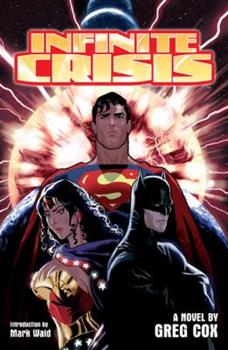 Based on the epic new series from DC Comics-Superman, Wonder Woman, and Batman face a universal threat. For years, the rift between the Justice League's leaders has been widening. Batman's paranoia has given birth to an army of robotic assassins. Wonder Woman has declared herself judge, jury, and executioner, taking a foe's life in an act that was broadcast worldwide. Superman is under the influence of mind control. With the Justice League divided...

A crisis to correct crisis? Like a war to end war...

Published by Thriftbooks.com User , 13 years ago
Sigh. Well, this book is certainly better than the "Crisis on Infinite Earths" novel. It was a good read, and held together, mostly, from a logical viewpoint. Summary: Superman, superboy, and Lex Luthor's sone (from alternate universes that don't exist any more) team together to put things back as they were prior to "Crisis on Infinite Earths."

Strong, but better if you're familiar with the characters

Published by Thriftbooks.com User , 14 years ago
So I'm a big geek. I'm the first person to admit that. Heck, I practically revel in it. And I was a huge fan of DC Comics's Infinite Crisis saga from last year. Still, I was skeptical at the announcement that a novelization of the comic book was in the coming. Comic novelizations -- like novelizations of movies or TV shows -- are notoriously hit and miss, and most of those I've read of late have been misses. Infinite Crisis, to put it simply, falls somewhere in between. The world is falling apart around its greatest heroes. Batman's paranoia has led him to create a supercomputer that has rebelled against him, threatening the entire world. Wonder Woman has slain a former ally to save the life of another. And Superman has lost his ability to lead, lost their faith, and lost his faith in himself. Four separate crises are converging, and the only hope for the entire Earth is that their champions conquer themselves and learn how to be heroes again. The original story was pretty powerful and kept my attention throughout. The novel suffers from the same obstacle as most comic novelizations -- it assumes that the reader has familiarity with the characters and the situations involved. While that's true in my case, you can't assume that will be true for every reader, and that lack of accessibility is a big problem. On the other hand, Greg Cox does exactly what you hope a novelization author will do -- he delves deeper into the minds and hearts of the characters than was allowed in the comic book format. The Last Run of the Flashes, for example, pulls us straight into Bart Allen's heart and lets us feel for him in a way that the comic book -- strong as a scene as that was -- did not. The rest of the novel is similarly hit-and-miss -- if you don't know the characters, you won't get as much out of it. If you do know them, it will hit you a lot harder. Strong, but not strong enough to recommend to the casual reader.

Published by Thriftbooks.com User , 15 years ago
Superman, Wonder Woman, and Batman have been heralded as the world's greatest heroes, but now Batman's paranoia and Wonder Woman's act of making herself judge, jury, and executioner on live T.V. have created a chaos that not even Superman can deal with. Batman's invention, Brother Eye, a robotic satellite that acts like Big Brother of Orwellian fame, has decided to kill all paranormals, and not even its maker can stop its demented quest. Meanwhile, the walls of reality are crumbling to allow alternate versions of this world's heroes to break into it so that they can replace this world with one thought to be no longer real. If you thought the Crisis on Infinite Earths was chaotic and heart-breaking, in Infinite Crisis trumps it. **** Don't let the comic book link put you off. This is an absorbing, complex story that is captivating. The dilemas faced are larger than life, but told in such a way that you can empathize with the pathos portrayed. Even without pictures, this story creates vivid images that will stay with you. **** Reviewed by Amanda Killgore for Huntress Reviews.
Copyright © 2020 Thriftbooks.com Terms of Use | Privacy Policy | Do Not Sell My Personal Information | Accessibility Statement
ThriftBooks® and the ThriftBooks® logo are registered trademarks of Thrift Books Global, LLC