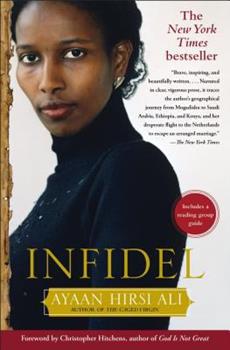 One of today's most admired and controversial political figures, Ayaan Hirsi Ali burst into international headlines following the murder of Theo van Gogh by an Islamist who threatened that she would be next. She made headlines again when she was stripped of her citizenship and resigned from the Dutch Parliament. Infidel shows the coming of age of this distinguished political superstar and champion of free speech as well as the development of her beliefs,...

Published by Gregory , 2 years ago
This book should be required reading in every classroom in America. When you read this book, you keep thinking that the conditions of life in Islamic lands as the author describes them, can't get any worse...then you turn the page. It is shocking, and appalling. They you realise that she is describing normal life. I cannot imagine the courage and humanity of this woman. She is a shining light.

Published by Thriftbooks.com User , 3 years ago
This story is incredible. It’s my favorite auto-biography. I think every woman should read this. This is the story of a girl who decided to take matters into her own hand, took responsibility for the hardships and pressed through to see her and others freedom achieved.

Published by Thriftbooks.com User , 13 years ago
Every woman age 15+ should view or read this book. The factual life of a woman who saw the wrongs of a society , who knew she had to get out, and who had the intelligence and perseverance to go!!!! And, then fight the wrongs she had endured as an Islam woman. Fast paced, alarming, worthwhile and time relevant.

Stunning read for any woman--no matter their religious perspective

Published by Thriftbooks.com User , 14 years ago
Rarely does a personal tale grip the reader as this one does many women--myself included. There for the grace of the luck of an accident of birth, could be me--or you. Caged. Locked into a cage, with no key available to release the power within. Ayaan is the woman whose co-production with Theo van Gogh, resulted in his vicious murder. The production, "Submission" is available on youtube--a rather tame 11 min. film detailing this one person's perspective. It is only a snippet of what Ayaan has to say about the importance of education for all women--the empowerment of societies through the power of all people. As women go about life--leaving the house without asking permission of another, making decisions without having to ask a man, May I--remember, that living in a cage could have happened to you. To me. To any of us. Must read for any woman, anywhere. Anytime.

Published by Thriftbooks.com User , 14 years ago
In her own words you hear the author, Ayann Hirsi (Magan) Ali relate to you her life story with the passion and emotion that can only come from having lived it. It is a brutally honest portrayal of life as a woman raise in a Muslim society. What impressed me the most was how totally different and isolated her life was growing up in Somalia and Kenya from my western way of life. Clitoral excision; covering your body from head-to-toe lest you inflame male desires; submitting to the males in you family in all matters, including arranged marriages; all part of the daily life of an Islamic woman. Add to that beatings from her mother whenever she dared to question their ways and you have a compelling look into the life of one of the most oppressed groups of people on the planet. I suspect if you were to ask Ayaan, she would say she had no choice but to seek asylum as a refugee in Holland, but everyday Muslim women around the world accept their lot to live this kind of life. Her bravery is inspiring, and I am grateful that she chose to share her story so that westerners like me can better understand a Muslim's way of life and the differences that separate their beliefs from Christian beliefs. Yet, I also take heart to know that we share many of the same values, concerns, and desires. She is someone I could easily befriend.

Must-Read By a Heroine of World Historical Importance

Published by Thriftbooks.com User , 15 years ago
"Infidel" by Ayaan Hirsi Ali is a must-read book by a heroine of world historical importance. Years from now, maybe even centuries from now, her depth and integrity, and the depth and integrity of others like her, will still be having a positive impact on the world. Please don't misunderstand this book. "Infidel" is NOT a right-wing tract or a left-wing tract; it is not a feminist pamphlet or an apologia for the West. "Infidel" is NOT an attack on Muslims. "Infidel" is a beautifully written work of art. If you were living on another planet, where there were no Muslims, no Westerners, no 9-11, you would still want to read this book for its profound human depth and its literary value. Ayaan Hirsi Ali takes the particular -- her own extraordinary life lived in Africa, Saudia Arabia, Europe and North America, lived as a hyper- devout Muslim and lived as a new atheist -- and, with the clarity of an electron microscope, depicting every detail, she creates a work of universal resonance. Have you ever been afraid to defy convention? Have you ever suffered to learn that your family's and people's traditions were not as benign as you had been taught to believe? Have you ever witnessed injustice and not known what to do? Have you ever wanted to be a hero or a heroine? If so, then you will see yourself in this book, even given its exotic details. Its exotic details include a heartbreaking scene that describes how madrassah -- Koran school -- pupils brutalized a girl they dubbed "kintirleey," that is, a girl whose private female anatomy had not yet been mutilated, as per Muslim-African custom. This scene is written in the most simple of language. You could read it with the television on in the background. And yet it falls on your heart with the weight of lead. What makes Ayaan Hirsi Ali a voice of world historical importance is partly her great art, exhibited here; it is also her shining courage. Simply, in an age where truth is penalized, banned, distorted, Ayaan Ali Hirsi simply speaks the truth. Hirsi Ali refuses to participate in nonsense. I want to type a word other than "nonsense" -- B.S. Hirsi Ali resists lies. That insistence on truth has made her life hard. She and her colleague, Theo van Gogh, made the film "Submission," about the fate of women in Islam. A Muslim assassin killed van Gogh on a public street, shooting him, stabbing him, slitting his throat, and, with a knife blade, affixing a note to his chest; the note threatened Ayaan Hirsi Ali. The words you read in "Infidel" have a high price. Hirsi Ali lives in constant danger for telling the truth. This book is so good and so important, that one knows that Ayaan Hirsi Ali's great courage is worth any price.

A vivid chronicle of a triumphant escape from cultural confinement

Published by Thriftbooks.com User , 15 years ago
Autobiographies often suffer from late-life authorship--a time when the fires are damped and the events foreshortened by time. This one--by a woman still in her thirties--is an exception to nearly every rule of the genre. Not least for its electrifying readability: it consumed every free moment of the two days it took to finish it. Putting it down was simply not an option. This book will grab your imagination like no other, transplant you into a world you have probably never known, and introduce you to the intimate world of a muslim family swept by circumstance all over Africa, Arabia, and Europe. The complex interaction of tribes, clans, cultures, extended families and nations (and their consequences) isn't dryly analyzed, it is woven into a personal drama with the momentum of a locomotive. The love of family rides perilously over the jarring railbed of refugee life, of ancient and modern Islamic conflicts, all of it recounted with real compassion in beautifully clear English. This multilingual immigrant needs no ghostwriter. Unlike the collection of editorial essays which comprised "The Caged Virgin", "Infidel" is a consistently focused narrative of a spectacularly eventful life launched almost inadvertantly into an unparalleled adventure in moral courage. But there's far more here than a clash-of-cultures story well told. There is no targeted rush toward a predestined liberation. The revelatory discovery of western freedoms comes late in the book and gathers like a slow-motion sunrise. Only in the final chapters does she defect from Muslim culture, graduate from the University of Leiden, become a Dutch legislator, a target of Islamic terrorists, and an incendiary revolutionary for Muslim womens' rights. More than simply discovering western libertarian values, she shows a deep and critical understanding of their history, how they've shaped the modern world, and shows their prognosis for dealing with the festering problem of Europe's Islamic subculture. Her extraordinary life seems more an ongoing work in progress than a settled iconographic career. She has recently moved to America--the adopted home of another famously eloquent and consequential revolutionary: Tom Paine.
Trustpilot
Copyright © 2022 Thriftbooks.com Terms of Use | Privacy Policy | Do Not Sell or Share My Personal Information | Accessibility Statement
ThriftBooks® and the ThriftBooks® logo are registered trademarks of Thrift Books Global, LLC