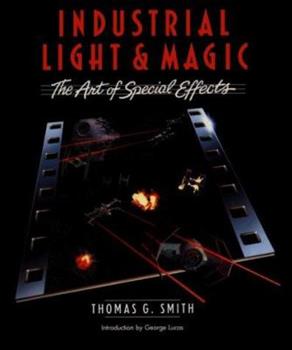 A lavish, profusely illustrated volume that tells the remarkable story of the organization whose name has become synonymous with state-of-the-art special effects: Industrial Light & Magic. From its early days in a large empty warehouse in Southern California's San Fernando Valley, to its Oscar-winning accommplishments creating special effects for the STAR WARS trilogy, RAIDERS OF THE LOST ARK, ET, POLTERGEIST, and a host of others.

Published by Thriftbooks.com User , 12 years ago
My parents asked me if I was sure I wanted to spend $100 on this book. That was 20 years ago when I was a young boy. I did not regret it for a second then and never have since. I consider this a must-have book if you're interested in special effects. It contains lots of interesting anecdotes about Industrial Light & Magic and the movies they worked on. The book itself seems to capture of the "magic". High quality pictures and BIG book physically makes it a stunning coffee table book too.

Published by Thriftbooks.com User , 14 years ago
Great book for anyone who loves cinema, starwars or special effects. The whole history of George Luca's Industrial Light and Magic.

Published by Thriftbooks.com User , 22 years ago
No one would ever have guessed that when Industrial Light & Magic opened its doors in Maren County that day way back in 1975 that they would produce the standard by which other special effects and other effects houses would be judged. ILM has formed the cornerstone of LucasFilm Ltd. a company that has spawned more spin-offs such as THX Sound, Skywalker Sound, all held neatly under the Lucas Digitial banner. Back in the days of Star Wars it was mostly using what was already known, and inventing everything else. ILM has been at the forefront ever since, from the early days of motion control cameras controlled by Apple computers the latest CG marvel like Galaxy Quest, Phantom Menace or Mission to Mars. The Art of Special Effects deals more with the older films-those before 1986, illustrating a time when computers were not so large a part in the film-making process. It gives the reader a great look at the sheer amount of detail that went into the models, the props, costumes from Star Wars to Explorers, from Raiders of the Lost Ark to the some of the Star Trek films, ILM constantly and consistently proven to innovative. The book as a whole is on a level lower than, say, Cinefex magazine, assuming that the reader doesn't know how blue screening and rotoscoping works or how miniatures are lensed. It is light reading without getting itself bogged down in too much technicality, for those who want that, read Cinefex. It also strikes me that this book is also best at presenting a dying era. A time when model makers kit bashed hundreds of plastic models just to build a Super Star Destroyer - few companies bother with that any more when everything can be rendered on a Silicon Graphics box and Maya and Soft Image software. Such films as Star Trek: Insurrection used few practical models and a completely CG Enterprise-E. The time of the supremely detailed, hand crafted model or set may be at an end, and I think the industry will be sadder for it. Partially because when I read Cinefex, a lot of what I see is the same-different movie, different space ship, but they're all rendered the same way and most use the same software, with only minor modifications or original code going into it to get a certain look or solve a certain problem. I suspect the Digital Realm of the movies, while producing better special effects, lacks the mystique of knowing that several people labored for months to build that model. That instead it was modeled by a few people over a period of a week. (Though it should be noted that a lot of films, including the Phantom Menace, used practical models). I suspect their days are number.

Published by Thriftbooks.com User , 22 years ago
Thomas Smith was general manager of Industrial Light and Magic a year before he came to write this impressive book. The book is centred around the film special effects creations of ILM between 1975 and 1985. This includes the then "Star Wars" trilogy, two Indiana Jones movies and other lesser known projects. For the Star Wars fan theres plenty to learn about one of your favourite movies. This book is lavishly illustrated with full colour photos including triple page or gatefold images. The focus though is on how the effects are done and who did them at ILM. From the art work in developing concepts of storylines, through modelling, creature creation, the actual filming methods and matte image creation to the finishing touches of animation and optical compositing this book gives a gradual demonstration of the work of a special effects company. For someone with no knowledge what so ever of special effects this is a good introduction and to those involved it must be fascinating as well. As Thomas Smith points out, while film fans still love the movies from this era (1975-85), movie goers constantly seek new visions on screen. The digital era has brought movies like Toy Story etc but these were just figments of imagination at the writing of this book so its worth noting Thomas Smith's far-sightedness in the final chapter on digitized movies. The format of the book is to take each department of the special effects process and show what it does and where its part comes in the crafting of a movie. In each chapter there are short biographies of the leading people in each area of effects, this is a nice touch as it can serve as guide for those interested in getting involved. Its worth noting, many of those profiled have a long interest in their specialty going back to their youth and through the various twists and turns of working in an industry knew of other members of the ILM company before actually joining this now esteemed organisation. Thomas Smith by no means is setting out to sell ILM's considerable expertise though he tells the story of a company making dreams into reality, itself moving from an idea to a serious business proposition. (As a final note another book on movies of this period Paul Sammons "Future Noir: The Making of Blade Runner" contains insightful descriptions about the crafting of a movie not least its special effects.)

One of the best on Special Effects

Published by Thriftbooks.com User , 23 years ago
Years ago I longed for this book, as it sat on the shelf in the local book store(it was not cheap). I received it with much gratitude on my birthday. Now as a teenager I found a reinterest in this book, and was overjoyed when the next book "into the digital realm" came out. For anyone who is captured by the magic of special effects, this is for you.
Trustpilot
Copyright © 2022 Thriftbooks.com Terms of Use | Privacy Policy | Do Not Sell or Share My Personal Information | Accessibility Statement
ThriftBooks® and the ThriftBooks® logo are registered trademarks of Thrift Books Global, LLC