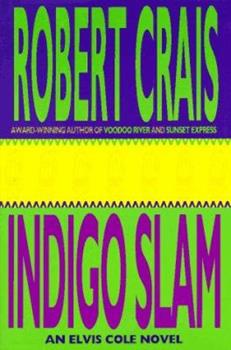 Life in the California sun suits Elvis Cole-until the day a fifteen-year-old girl and her two younger siblings walk into his office. Then everything changes.Three years ago, a Seattle family ran for their lives in a hail of bullets. Hired by three kids to find their missing father, Elvis now must pick up the cold pieces of a drama that began that night. What he finds is a sordid tale of high crimes and illicit drugs. As clues to a man's secret life...

Nothing is What it Seems

Published by Thriftbooks.com User , 17 years ago
It was plant day in Los Angeles, at least that what Private Investigator Elvis Cole calls the day of the month that he waters his dying plants. Elvis isn't good with plants. Anyway he's busy caring for them when Teresa, Charles and Winona Haines walk into his office. They want Elvis to find their father. Elvis doesn't work for children, so he sends them away. However, after they leave he realizes that he's screwed up. The kids were obviously in trouble, had come to him for help and he'd failed them. He rushes downstairs in time to see fifteen-year-old Teresa pull away from the curb. He dashes to his car and follows, thinking that the girl, who is too young to drive, has a lot on her young shoulders. He decides to help the children and Teresa pulls a wad of hundred dollar bills from her purse, but he tells her he won't take money from her, she insists and he accepts two of the bills and leaves, thinking it'll be an easy job. But as usual in a Robert Crais detective thriller, things are not always as they seem. Elvis goes to the print shop where Charles Haines, the errant father, works and finds out he was fired because the boss caught him shooting up. The kid's father is a junky and that's the last thing Elvis wants to tell them. From the phone bill he learns Charles called Seattle several times, so he flies up there on his own nickle, asks questions and is kidnapped, beat up and almost killed by Russian mobsters who want to know why Elvis is asking question about Charles, who's last name by the way isn't Haines, but Hewitt. Fortunately he's saved at the last minute by U.S. Marshals who want to know the same thing. Elvis figures out that Charles had flown the coup from the federal witness program. That he was a big time counterfeiter and that some very bad guys want him dead and that they'll kill anybody who gets in their way. Fortunately, Elvis has his pal, the quiet and broody Pike to watch his back. And thus it begins, the twists and turns of a Robert Crais novel where, as I said above, nothing is as it seems. Just when you think you've got a handle on the story it takes a quick right turn and you're slapping yourself upside the head, murmuring, "Why didn't I see that?" INDIGO SLAM, like every book Robert Crais has written, is a five star read, one that won't let you sleep, eat or go to work until you finish, it's that good. Reviewed by Vesta Irene

You can't go wrong with Elvis

Published by Thriftbooks.com User , 19 years ago
For me, the mystery of Indigo Slam is why it was out of print for years. Originally published in 1997, it didn't come out in paperback till 2003 (and the hardcover disappeared), while other later Crais novels (including another Cole book) did the usual hardcover-to-paperback cycle and remained on the shelves. Whatever the reason, it's here now and it's really good.Elvis Cole, self-proclaimed World's Greatest Detective, is hired by three children to find their father. Motivated more by conscience than money, he helps them. When it turns out that the father is on the run from the Russian mob, Elvis starts getting in over his head. Fortunately, there is his laconic partner Pike to watch his back.Mystery fans will see a certain similarity between the Cole books and Robert Parker's Spenser. Both feature wise-cracking tough private eyes with mysterious but generally good-hearted partners. Unfortunately, over the years, I found Spenser getting unlikably smug and self-righteous, while Cole remains a pleasure to read about. And both Cole and Pike are much more well-developed than either Spenser or Hawk, neither of whom even reveal their full names (the single-named hero is a bit of a tired gimmick nowadays...Richard Stark's Parker is forgiven because he's been around since the mid-60's).You don't need to have read other Elvis Cole novels to get into this one; Crais makes it easy to get right into things. For fans of the private-eye novel, you'll find this - like all the other novels by Crais - delightfully entertaining.

Modern PI at its best.

Published by Thriftbooks.com User , 21 years ago
Robert Crais breathes new life into the wisecracking PI genre with his Elvis Cole series. What at first looks like a Spenser clone, becomes fresh and satisfying with Crais' guidance. Cole and his partner Joe Pike find themselves as nursemaids to 3 kids whose father has flown from the care of the witness protection program. What looks to be a case of finding a deadbeat drugged out lowlife takes a turn when the father turns out to be a bit different than Cole's image of him. The fight to save the family brings Cole into conflict with Vietmnamese expatriates, the Russian mob, the Witness Protection Program and the US Treasury. It leads to an exciting chase at Disneyland which guarantees that this book will never be made into a Disney film and a stunning conclusion which puts the family in extreme jeopardy. Write on, Mr Crais, write on.

Published by Thriftbooks.com User , 22 years ago
I have purchased many Robert Crais novels and finally got a chance to start reading some of them. I could almost kick myself for waiting this long. Crais has a great detective noir style similiar to Spillane and Hammett. However in this story the client is not a woman looking for her husband, but a group of young children looking for their lost father.Crais' main character P.I. Elvis Cole takes on the case to find the missing father. He figures it will be a quick easy job not knowing what is in store for him. The kids claim that the father is gone looking for a new printing job. However Cole finds out that the father is not what the kids claim. The journey takes Cole on a wild trip with encounters with drug dealers, Russian mobsters, Vietanesse rebels, and crooked U.S. Marshals. The story also ends up in Disneyland a great place to end a story with three kids.Crais is a pure joy in this novel. His characters of Cole and partner Pike are closely related to Robert Pearker's Spencer and Hawk. The kids are very well written, and all three are different instead of cardboard cutouts, which is how most kids get portrayed in this genre. I highly recommend this one and look forward to much more.
Trustpilot
Copyright © 2022 Thriftbooks.com Terms of Use | Privacy Policy | Do Not Sell My Personal Information | Cookie Preferences | Accessibility Statement
ThriftBooks® and the ThriftBooks® logo are registered trademarks of Thrift Books Global, LLC