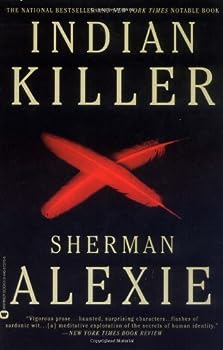 This description may be from another edition of this product. "Part thriller, part magical realism, and part social commentary, Indian Killer . . . lingers long past the final page."-- Seattle Weekly A national best seller, Indian Killer is arguably Sherman...

Well worth a second look

Published by Thriftbooks.com User , 14 years ago
After reading other reviewers, I am amused and not a bit surprised. Sherman Alexie can't get a break - sure he is successful by many standards, but the critiques I read were watery. Useless, in fact. This book was a departure from Alexie's shorter stories - any why not? His short stories were a departure from his poems. His films have been departures in a sense, both from his texts, and also one from the other. His poetry bouts and comedy are also departures. What that says to me is you can't categorize Alexie, and thank goodness. Prolific and talented may be the two that could be applied most, and we are fortunate as his audience. Why should Alexie make white people interesting? Though I would argue he does, this criticism is useless. White people reading his book will most likely be too busy emulating one or more of the characters. I just finished reading the novel a second time. I read it when it first came out, and promptly gave my copy to my best friend. That was in 1996/7. I lived in Seattle at the time. Since that time I've had time to learn a lot of things from some really understanding and brilliant people. My recent reading of Indian Killer was mind-blowing. Alexie has a keen mind for detail - I am giving a lecture tonight with this text in hand, and the historical context makes my 2.5 hour class an easy one to teach. Adoption of Native children , sterilization of Native women, poverty, alcoholism, racism - all these are trends that were ultimately going to wipe out Native populations - something we know as ethnic cleansing or genocide. And these are just in recent history. The wannabe Indian movement is where I was nailed, but thankfully schooled about in the early 90s. None of those folks I knew were wannabe drunks, wannabe in poverty, wannabe sterilized, etc. A huge trend in Seattle in the 1990s, with books like Women Who Run With the Wolves and Iron John. These movements were just another way for whites to "deal" with their complicity in how messed up the world is for over half its occupants. Now everyone has found religion or Prozac. But its clear Alexie won't let us white folks burrow into our complacency without a fight. Thank goodness.

Published by Thriftbooks.com User , 15 years ago
Some jump on Alexie, but he writes as he sees it - through the eyes of one who has lived on America's Indian Reservations. He writes what he knows about, as do most great writers and you can't fault him for forcefullness. In Alesie's case, it's about being an American Indian living on a reservation and then leaving and entering the land of 'white'. He's felt the prejudments of a nation and watched those who think it's "cool" to wear feathers and smoke their stash in scared pipes. Our reservations are homes for the poorest of the poor in America, where life is one unprecedented struggle after another. It's a lifetime of trying to find your way and trying to fit in somewhere. Those who find his words strong and insultive haven't emerged from a history that lead a nation to turn against and displace all FIRST PEOPLES. A nation who did its' best to beat the Indian spirit into dust, as it openly attempted genocide on an entire race. There is no other culture in this country that has suffered so much and yet has stayed so true to their traditions and ancesters; or has had to fight so hard and wait so long to be recognized as a citizen of this country as has the American Indian. Alexis' words are surprisingly mild, all considering. That being said... He's an extremely talented writer and this book is a tremedious example of his great story telling. I read this book awhile ago and want to read it again. It's a compelling thriller that keeps you guessing to the very end. I thought it was an incredible book and didn't want to put it down.

Published by Thriftbooks.com User , 17 years ago
I think it is more than fair to say the Sherman Alexie has succeeded in writing one of the greatest contemporary Urban Aboriginal mystery/murder novels on the bookshelves today. Mr. Alexie has a great talent for challenging all the lies we have accepted as reality in the "Indigenous experience" and knocks us over with his own vision of the hardships and pain of contemporary Native life with a twist of Stephen King thrown into the mix. John Smith is a young aboriginal man who was raised by White adoptive parents and has no knowledge of his tribe or any other specifics tied to his heritage. John is in the depths of a traumatic identity crisis that spirals into mental illness and psychotic, murderous episodes. His goal is to avenge the death and misery of every Indigenous person by systematically stalking and then murdering affluent Caucasian men. This series of killings becomes the hot topic of Seattle as more and more race-related fights take place between White and Native residents. This is such an important novel and I am so glad that Sherman Alexie wrote it. I felt as though we, as the readers, were taking a glimpse inside the many facets of his writer's mind and all of the depths of his personality as a storyteller. It is a cautionary tale of what happens when someone is so far removed from themselves (example being John Smith) that they are driven to the depths of despair, due to their isolation and lack of confidence. I once took a course with Sherman Alexie at the University of Washington where he stated that living on the Rez (where many indigenous people still reside in North America) is like living in an Edith Warton novel. Authenticity is measured to the most minute degree. Everything from your behavior to the pigment of your skin is considered a potential flaw. from which you can fall from grace at any given moment. Imagine growing up a young indigenous man, surrounded by loving, adoptive parents who know nothing of your specific tribe, but are greatly divided from you by their race and their ignorance. Instead of being taught about your specific tribal practices, you are bombarded with information about every tribe (as if that would make up for your lack of self awareness). Though this is definitely a murder mystery novel, Sherman Alexie manages to balance horror scenes with humorous bits, as well as intellectual criticism on the state of contemporary race relations and really forces us to examine our own stereotypes and prejudices. Great book and definitely a fast read!

Published by Thriftbooks.com User , 20 years ago
Alexie amazes once again with his stunning use of prose. This book like his others goes deep into the world of double consciousness- what it is to be indian and what it is to be an indian in the white world. Like W.E.B. Dubois, who penned the double-consciousness theory, Alexie delves deep into the world of this phenomenon. This book is an absolute page-turner and a must read for all.
Copyright © 2020 Thriftbooks.com Terms of Use | Privacy Policy | Do Not Sell My Personal Information | Accessibility Statement
ThriftBooks® and the ThriftBooks® logo are registered trademarks of Thrift Books Global, LLC