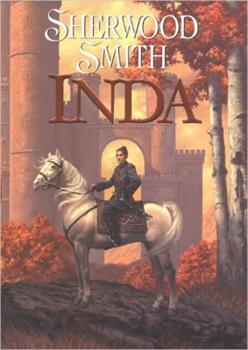 Inda: Book One of Inda

Indevan Algara-Vayir was born the second son of a powerful prince, destined to stay at home and defend his family's castle. But when war threatens, Inda is sent to the Royal Academy where he learns the art of war and finds that danger and intrigue don't only come from outside the kingdom.

Depth, true originality and a great plot in a very complex world

Published by Thriftbooks.com User , 14 years ago
I waited until the sequel, The FOX, was out, before reading this. I was happy I did, the two books together - as SSmith points out on her website - make a better story arc to stop after. Stopping at the end of this book is really hard, you do not feel that you can let go at this point. And the more I read, the more I hate those cliffhanger endings. I want to be OK with leaving the characters in a place of temporary rest, or at the end of a big effort, and not right in the middle. I am still eagerly waiting for the third volume, as this does not mean that at the end of FOX I am not very curious what comes next. Yes, I agree with other reviewers, that this is a complex world that we discover only bits by bits - and that at the start names are a big problem, so many! solution: on her website, you can find a name list and index, I printed that out, it helped. It might be nice if it were right there in the book though. So I had to have just a little patience until I understood what was happening at the big level - history, culture, adult plotting and intrigue in the background. At the smaller one, the story of boys in a military training school should have been boring, I am not a boy, I am not interested very much in military, but I got pulled in fast, and she did not let go. I was immersed in the world from very early on, and I read it every moment i could until the end of FOX. Characters and their motives are very well described, you can understand even those who do evil things because their thought processes and feelings are drawn clearly, there are no over the top villains, the surprises are believable, the coincidences too. There is not too much jumping around from one character to the other. I cannot say why this is such a very very good book, I just wish that SSmith were much more popular, so her backlist would be published, her new novels brought out quickly, I just want more of her work. I read on her site that she has books without a publisher, it seems very sad to know how much I would like to spend money on her work and here she cannot sell it!! Just one caution: Do not go for this if you want a quick and easy read, you have to be awake to follow all those plots and ideas, otherwise you will just be disappointed. Perfect for a long planeride or a quiet weekend or vacation.

Ms. Smith Does Know This World Too Well

Published by Thriftbooks.com User , 15 years ago
leaving the rest of us to play catch-up at times, but in a world imagined this intensely, there's always going to be more detail than can ever be brought into any one storyline. That's the case here--the reader is left entirely convinced that, around any corner, in any cupboard, whether we find ourselves in a hovel, castle, mansion, or country, aboard a ship or aboard a stallion, still more consistent but surprising detail lurks, waiting to be found. While I understand the annoyance of the reviewer below--a stutterer herself, who finds the character of the "evil," stuttering heir-to-the-throne too one-dimensional--the stuttering is NOT actually portrayed as the root of the prince's evil. In fact, this prince is presented sympathetically in several respects: at several different points, he attempts to resist his "weaknesses," the less-than-noble character traits we all have. But his "evil" uncle consistently undercuts the prince's efforts. And even the uncle is not presented as inherently evil, but as rather-complexly conflicted--so driven by his own need to demonstrate his loyalty that he's ultimately led into disloyally. The uncle's motivating passions and jealousies are themselves traced back to an earlier generation's envies and enmities. Ultimately, the elite, governing strata of Inda's society is shown to contain its own vein of weakness: an "Achilles' heel" of abusive behavior, in which brothers are pitted against one another, supposedly to develop their strength. As with the British "public" school system, sometimes strength and bonding emerge from this corrupt cauldron; sometimes cruelty and competitiveness are fostered instead. And this unhealthy system itself is shown to have understandable antecedents in the history of the culture--horse-borne conquerors trying to adapt to the settled ways of the more-sophisticated and civilized agrarian culture is has managed to overcome militarily. The "conquered" culture itself is fighting back in various covert ways to absorb the conquerors and make them over, even as--within the culture of the overlords--the genders find themselves covertly working at cross purposes, even developing contrasting systems of personal combat. Which leads us to the issue of Inda's "heroic" perfection: superb strategist, fighter, leader... Again, however, we are shown--to a certain extent, since Inda does seem to have an inborn talent for integrating data under pressure--how Inda comes by the skills he has. as much through loss and misery as through glory and gain. For he too is shown both as the intended highest product of a "war-gaming" culture and as that culture's victim (and, perhaps, its ultimate nemesis): Inda-the-child is shown receiving the benefit of the "female" as well as the male sides of the culture (via his mother, his sister, and his bride-to-be). Somebody in a given culture is bound to embody--or surpass--the traits the culture deems most desirable. Interestingly, of course, when those in

Published by Thriftbooks.com User , 15 years ago
Inda is quite a bit different from what I expected--it is not the "comfort reading" that Crown Duel is for me. This is a much more complicated (and more adult) story, told in omniscient POV and spanning many years, and set in a harsh society where physical abuse of younger brothers by elder brothers is a thoroughly accepted component of education and training for adult responsibilities. Smith's worldbuilding, however, is so complete that although my sheltered sensibilities would normally recoil from this kind of endemic violence, it is understandable within the context of the story, and we readers are able to empathize with the characters' attitudes toward this and other aspects of their world. And the characters are wonderful: Inda, with his kindheartedness and inborn genius for military strategy; Sponge, the scholarly young prince of whom no one expects much; Hadand, the future wife of the crown prince, pursuing secret studies in magic; Tau, the beautiful pleasure-house boy who becomes a mercenary sailor; Tanrid, Inda's honorable, conscientious, tough-minded brother.... There are villains here, too, driven by lust or greed or jealousy, or simply by their own ideas of what is good for the kingdom; there are no hard and fast moral lines, and sympathetic characters are sometimes misguided, sometimes make tragic mistakes. There are many intriguing aspects to Inda's militaristic society; I am particularly fascinated by the gender roles. Noble boys and girls both receive military training, but the girls' is focused on castle defense, while the boys' emphasizes offensive tactics, equestrian skills, and the like, for they will be the ones to ride out to war. Boys and girls, men and women mix very freely in this society (ships are crewed by both genders, for example), but there is still an invisible wall separating them and, at least among the nobles, there seems to be a perception that women and men inhabit rather different worlds. And as some of the men are beginning to realize, the women have many secrets. Readers who have difficulty with a lot of made-up words and names are likely to find Inda slow going at first (there is a glossary at the back of the book, though), and the complexities of the plot require some attentive reading, but the effort is well worth it. This world is fascinating, and the characters so thoroughly engaging that I find myself wondering about them throughout the day. I've stayed up way too late a few nights because I couldn't bear not to find out what happened next to Inda and the rest! Even so, I'm a slow reader, so I haven't quite finished Inda yet, but I expect to tonight. I know I'm going to be left with that peculiar feeling of loss one gets after finishing a book that has completely involved one in its imaginative world.

an excellent fantasy novel set in a rich, complex world

Published by Thriftbooks.com User , 15 years ago
Indevan-Dal Algara-Vayir is the second son of the Prince and Princess of Choraed Elgaer, destined to become Shield Arm (military leader) for his older brother Tanric. His future seems all laid out for him, down to the girl he'll marry -- until one day when a messenger arrives from the King, summoning Inda to the King's Military Academy. Inda thinks he's prepared for the harsh life at the Academy, as Tanric has always followed the tradition of thrashing his younger brother into obedience, but when he gets there, he finds himself caught up in a confusing tangle of loyalty and treachery. What I was most impressed with in _Inda_ is the worldbuilding. According to the jacket copy, Smith has been writing stories in this world since she was eight, and consequently, it's fantastically deep and rich. Particularly interesting to me was the relationship between men and women. Inda's society is war-oriented, constantly on guard, skirmishing, and occasionally conquering. Though the men are in charge of war and offense, that does not exclude the women, who receive their own kind of training, oriented toward defense rather than offense. Along with the worldbuilding, the characterization is also excellent. Inda himself is the character we spend the most time with and get to know the best, but there are a variety of other viewpoints which enrich our understanding of him and of his friends, family, and enemies. Sometimes I find multiple viewpoints offputting, but here I felt that they really contributed to the depth of the characters. _Inda_ is the first in a trilogy, and I'm already eager for the next books.
Copyright © 2020 Thriftbooks.com Terms of Use | Privacy Policy | Do Not Sell My Personal Information | Accessibility Statement
ThriftBooks® and the ThriftBooks® logo are registered trademarks of Thrift Books Global, LLC