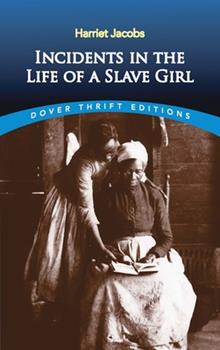 Incidents in the Life of a Slave Girl

The true story of an individual's struggle for self-identity, self-preservation, and freedom, Incidents in the Life of a Slave Girl remains among the few extant slave narratives written by a woman. This autobiographical account chronicles the remarkable odyssey of Harriet Jacobs (1813-1897) whose dauntless spirit and faith carried her from a life of servitude and degradation in North Carolina to liberty and reunion with her children in the North.Written...

Incidents in the Life of a Slave Girl

Published by Thriftbooks.com User , 14 years ago
An excellent book for high school students, this book provides an indepth look at the emotional turmoil of a young slave girl through her growth to motherhood and finally to freedom.

Published by Thriftbooks.com User , 17 years ago
Harriet Jacobs, as an ex-enslaved female African American, wrote not only one of the first but also one of the most powerful narratives of enslavement. For any reader, of any race, desirous of experiencing something of the horrors of slavery, "Incidents in the Life of a Slave Girl" delivers. Jacobs documents the horrendous treatment she and her fellow enslaved family members endured. Treated as nothing more than chattel, Jacobs repeatedly resisted the lewd advances of her owner. True escape and freedom impossible, Harriet "escaped" to a tiny underground hole in a relative's shack. Imagine what it was like for her to "live" there for seven years, watching through crevices her children age and her relatives raped. External freedom impossible, her story explores the possibility of internal freedom. In her case, found through her Christian faith and her hope of earthly freedom some day and heavenly freedom one day. "Incidents" is mind-expanding, awe-inspiring, and soul-developing. Read it to learn and to change. Reviewer: Robert W. Kellemen, Ph.D., is the author of "Beyond the Suffering: Embracing the Legacy of African American Soul Care and Spiritual Direction." He has also authored "Soul Physicians" and "Spiritual Friends."

Published by Thriftbooks.com User , 19 years ago
Incidents in the Life of a Slave Girl by Linda Brent is a deeply touching narrative of a slave woman's journey through the heinous institution of slavery to her eventual emancipation. Through her description of bonded labor, the reader very poignantly realizes what it was like for millions of African Americans to be brutalized and ravaged by slavery. Written in 1861 to educate the Northerners, especially the women, about the evils of slavery, the autobiography is a harrowing account of a woman's life, what the author ironically calls her `adventures'. The abuse that the palpably intelligent and veracious author had to undergo has the power to humble every one of us even today. Linda Brent was born as a slave in the household of a miraculously benevolent mistress. She lost her mother at the age of six, but her mistress, who was her mother's half-sister, took good care of her and endowed on her ward the gift of literacy. The degradative reality of slavery was hidden from the author till she entered her early teens, when within a year both her mistress and her father passed away, and she was acquired by the household of Dr. Flint. At his plantation, the author had to bear the full force of slavery. From this time to the author's eventual freedom, the reader gets a glimpse of the persecution that a slave had to face. As mentioned above, the book was written to illustrate the depravity of slavery to people living in the North. It is striking to see how humbly, or even apologetically, the author has used her life to explain the circumstances of slavery. She has used fictitious names and concealed the names of places so as not to offend any person, black or white. As one reads the book, the author can definitely be identified as a pious and truthful person, and becomes easy to see why the author places so much emphasis on her secrecy. The book is not written to garner sympathy from readers, but to shock readers into the realities of slavery. It was an appeal to the people who the author thought had the power to defeat slavery to act on it. The author's main argument is that slavery is not just about perpetual bondage, but it involves the absolute debasement of a people. She painfully acknowledges that the `black man is inferior', but vociferously argues that it is a result of slavery, which stymies the intellectual capacity of her race. She believes that `white men compel' the black race to be ignorant. Although she was wronged by many Southern white men, she does not blame the white race for her ills. She believes that the institution of slavery has ample negative impact on the household and psyche of a white family as well, and that white males are coerced into being brutal. She rebukes `the Free States' in her own pacific way for condoning slavery in the South. Her stand is that a life of manumit destitution is radically more acceptable than bondage, and that is the general idea that the author wants the readers to remember. The book is sequenced mor

A Woman's Life in Slavery

Published by Thriftbooks.com User , 20 years ago
Harriet Jacobs' (1813-1897) "Incidents in the Life of a Slave Girl" is one of the few accounts of Southern slavery written by a woman. The book was published in 1861 through the efforts of Maria Child, an abolitionist who edited the book and wrote an introduction to it. The book had its origin in a series of letters Jacobs wrote between 1853 and 1861 to her friends in the abolitionist movement, notably a woman named Amy Post. Historically, there was some doubt about the authorship of the book and about the authenticity of the incidents it records. These doubts have largely been put to rest by the discovery of the letters.The book indeed has elements of a disguise and of a novel. Jacobs never uses her real name but calls herself instead "Linda Brent." The other characters in the book are also given pseudonyms. Jacobs tells us in the Preface to the book (signed "Linda Brent") that she changed names in order to protect the privacy of indiduals but that the incidents recounted in the narrative are "no fiction".Jacobs was born in slave rural North Carolina. As a young girl, she learned to read and write, which was highly rare among slaves. At about the age of 11 she was sent to live as a slave to a doctor who also owned a plantation, called "Dr. Flint" in the book. Jacobs book describes well the cruelties of the "Peculiar Institution -- in terms of its beatings, floggings, and burnings, overwork, starvation, and dehumanization. It focuses as well upon the selling and wrenching apart of families that resulted from the commodification of people in the slave system. But Jacobs' book is unique in that it describes first-hand the sexual indignities to which women were subjected in slavery. (Other accounts, such as those of Frederick Douglass, were written by men.) The book is also unusual in that Jacobs does not portray herself entirely as a hero but describes the nature of the steps she took to avoid becoming the sexual slave of Flint. Thus, when Flint subjected her to repeated sexual advances from the time Jacobs reached the age of 16, she tried to avoid him by beginning an affair with a white, single attorney with whom she had two children. When Flint's advances persisted, Jacobs formed the determination to try to secure her freedom. The bulk of the book describes how Jacobs hid precariously in a cramped attic for seven years waiting for the opporunity to secure her freedom. There are also accounts of her prior attempts to leave slavery, including a particularly harrowing account of several days in a place aptly named "Snaky Swamp."Jacobs describes her relationship with her grandmother, a free black woman who was probably the major inspiration of her life. She also describes well her love and concern for her children, conceived through the liasion with the white attorney.This book offers a rare perspective on American slavery as it affected women. It is also a testament, I think, to the value of literacy and knowledge as an instrument

Published by Thriftbooks.com User , 20 years ago
This is the book that brought home a dimension of slavery to me that I had never understood: the psychological repercussions of someone presuming that they can own someone else. Perhaps it had to be written by a woman, who was regarded as the sexual property of a horrible man.The story of how she escapes and frustrates her "owner" is indeed enthralling, a triumph of human will in the worst adversity. She hid under the slanted roof of her mothers house for years, permanently injuring her back and watching he children grow up from afar. It is such a moving story that I imagined turning it into a play, with the narrator reminising of her life while hidden in that cramped space.As this is a memoire, the characters in it are very very real, all too human and without the black-and-white quality of too many novels on this bizarre twist of American history. While the writing style is so superb that it had to have been edited by an expert writer, the story and voice are so vivid that it must be real.I have given this book to literally dozens of friends, and almost to a one they have marvelled at the depth of the story. This is the best and most complete account of an aberration in American history of which we all must bear some sense of responsibilty. Get this: it cannot disappoint.
Trustpilot
Copyright © 2022 Thriftbooks.com Terms of Use | Privacy Policy | Do Not Sell or Share My Personal Information | Accessibility Statement
ThriftBooks® and the ThriftBooks® logo are registered trademarks of Thrift Books Global, LLC