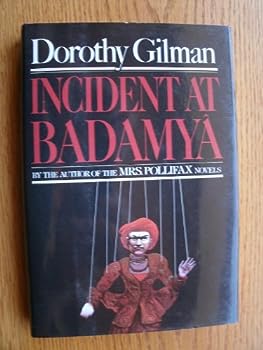 This description may be from another edition of this product. "Gilman keeps you turning the pages." UPI After Gen Ferris's missionary father commits suicide in 1950, it is up to her to get out of Burma alone. She has one hundred dollars in her knapsack, a...

Published by Thriftbooks.com User , 14 years ago
I have now read all of Dorothy Gillam's books. Was so glad to get this copy. I am pleased with the book. Thanks.

another winner from Dorothy Gilman

Published by Thriftbooks.com User , 15 years ago
Dorothy Gilman is one of my favorite authors. So when this was the choice for our book club I was delighted. Somewhat different from her other books, this was still a wonderful book. If this is your first Dorothy Gilman book you also need to read Tightrope Walker and Thale's Folly, those are great books.

Published by Thriftbooks.com User , 18 years ago
I've read this book several times, and it never fails to make my skin tingle. First off, I've been to Burma, which doesn't really change, so I relate especially to the setting. Dorothy Gilman usually does a good job with her settings. They are like travelogues -- at least in the places I have also visited. The plot involves a bit of supernatural, and a bit of created supernatural. The feature of the insurgent group, and the Chinese Communist rings true, although the Kuomingtang (nationalist) was more active in the area just after 1949. What I liked best was the interaction between the captives -- how they resolved differences and came to respect each other strengths. Perhaps the puppetmaster made it so. I especially liked the line praising escapist literature. The last reason I appreciate the book is that I spent two weeks of my youth with a sculptor named Genevieve in upstate New York, who reminded me of Gen.

Wonderful book for all ages

Published by Thriftbooks.com User , 18 years ago
Those who read Dorothy Gilman's books regularly will be surprised by this one; it's not her usual genre. A child is a prisoner, caught between warring factions. In the camp, her life is made bearable when she is befriended by a wise old man.When, later, she seeks to find him again, she discovers that...well, I can't reveal what she finds, because it'd give away the magic of the story. It's a bit of Twilight Zone do-do-DO-do music that's called for here.Quick, easy read - wonderful and compelling book.

A Touch of Mystical

Published by Thriftbooks.com User , 21 years ago
Gen Ferris is an unusual girl, living in Burma in 1950, the daughter of a missionary--when she has to make her way out of the country. Her flight is almost immediately interrupted by her capture by Red Chinese forces, along with a large and often comical cast of characters, who are imprisoned with her. But she soon realizes that these people are wearing masks that hide their true selves. And subtle forces bring her help and illumination, both for her life and spirit as well as her fellow captives. It is never overtly stated, but beautifully done, and when I put the book down, it made me wistful for that magic. A good read!
Copyright © 2020 Thriftbooks.com Terms of Use | Privacy Policy | Do Not Sell My Personal Information | Accessibility Statement
ThriftBooks® and the ThriftBooks® logo are registered trademarks of Thrift Books Global, LLC