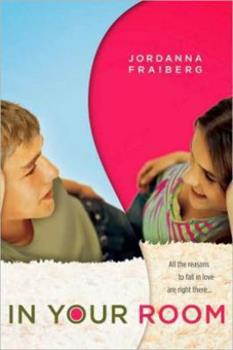 Molly and Charlie have fallen head over heels in love'even though they've never met Molly is a fashion-conscious city girl in L.A. Charlie is an earthy, mountain-biking dude from Boulder, Colorado. Each of them has big plans with their respective friends for the summer'until they discover that their parents decided to swap houses! Luckily there's no amount of homesickness that a bit of snooping can't cure. Charlie and Molly begin crawling under beds...

Published by Thriftbooks.com User , 12 years ago
I don't even know what to say, it was just really, really, amazing. Kind of a mixture of Sarah Dessen and Judy Blume. IN YOUR ROOM has just become one of my new favorite books.

Published by Thriftbooks.com User , 12 years ago
Molly Hill and Charlie Richards are swapping houses for the summer. They've never met and they have no desire to leave their homes and have to stay in someone else's room. But Molly's mom just got remarried to Ron, and the three of them are going to Boulder for the honeymoon. In return, Charlie's moms are coming to L.A. in order for one of them to teach at UCLA for the summer. Neither is pleased to be out of their own environment for the summer, but soon Molly has gotten into a groove. She discovers an awesome vintage shop, and before she leaves, she's somehow managed to get a job. In no time, the owner of the shop is getting more business than she could have imagined. Molly has the magic touch for window displays, drawing in customers off the street. Molly's also made a new friend, Penelope. But it won't be long before Molly discovers the connection between Charlie and Penelope. In L.A., Molly's best friend, Celeste, decides to take Charlie under her wing. She's really excited to find out that Charlie is very cute. Soon, Molly and Charlie are emailing each other to explain their lives and to help feel their way around their new cities. But as the summer progresses, the two become closer as they begin to share their thoughts with each other. Just when Molly believes she can trust Charlie and the two may have a deeper connection, she discovers information that may threaten their budding relationship. Told in alternating voices between Molly and Charlie, IN YOUR ROOM moves quickly and enjoyably. The two characters are quite likeable and the reader starts hoping that the couple will be able to come together before the end of the story. The ending is a nice surprise, and will leave everyone feeling all warm and mushy inside. Reviewed by: Jaglvr

Published by Thriftbooks.com User , 13 years ago
This is a lovely book that reminds me of the innocence, hopefulness, and sweetness of adolescence.

Published by Thriftbooks.com User , 13 years ago
Molly's mother is getting married again, and she is dreading having a new potential father. She's even less thrilled to be joining the newly weds on their honeymoon. Charlie was looking forward to his summer riding his bike in the mountains of Colorado discovering new trails to conquer. However, his two mothers have a different summer planned for the family and it's nowhere near the snowy peaks. Little do they know Molly and Charlie are in for the most memorable summer of their lives. Molly's family will be heading to Colorado and Charlie's family will be heading to L.A. it's a house swap! Getting to know the other person by staying in each others rooms is one thing, but these two end up finding out more about themselves in someone else's room. Let me just start out saying that I loved this book! It was fun, it was fast, it was cute! I'm a sucker for a good love story, what can I say?! Yes, it was a love story, but it wasn't an over the top too cheesy even for me love story. It was balanced and possibly even believable. So, don't let that turn you away! We have Molly the fashion guru, timid, pretty, afraid to get her heart broken. Then there's Charlie, the mountain bike maniac, genuine, hot, 100% guy. I don't know if you could get much different, but somehow it works. I love the fact that they literally fall in love with each other's personalities, I mean it's like match.com, but without the stupid questionnaire and compatibility test. Not that I've ever been to match.com, or even know that they have a questionnaire. I mean you've seen the commercials too, right? Anyway, it's like they bring out the best in each other and they do it from thousands of miles away. Sucker for the romantics, I know! Still, Charlie isn't like some made up version of a guy from a Nicholas Sparks novel, he is flawed and the poor guy he screws up. I can't say that I really blame him though, but that's beside the point. The point is their relationship works, because they have this crazy thing that they do called communication! It also helps that they are actually attracted to each other too, I mean you do have to have some level of attraction, I don't care what you say! I can't really pinpoint one thing that made me like the story so much, I think maybe it was a combination of the characters and just the whole premise of the novel itself, but I just picked it up and I just had to know.... are these two ever going to get together! And believe me, you'll want to know too! My only complaint..... I want more!

Published by Thriftbooks.com User , 13 years ago
This sweet story reminded me of all the Judy Blume's I read as a kid and confirmed my suspicion, that times, technology and circumstances may change but adolescence is a constant. What a fresh and charming debut from a great new voice.
Copyright © 2022 Thriftbooks.com Terms of Use | Privacy Policy | Do Not Sell My Personal Information | Accessibility Statement
ThriftBooks® and the ThriftBooks® logo are registered trademarks of Thrift Books Global, LLC