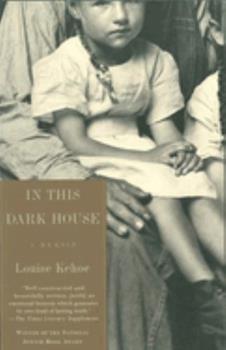 In This Dark House: A Memoir

In 1939 the influential architect Berthold Lubetkin abruptly left his thriving career in London and dropped out of sight, moving with his wife to a desolate farm in rural Gloucestershire. Life in the house the Lubetkins named "World's End" was far from idyllic for their three children. Louise Kehoe and her siblings lived in an atmosphere of oppressive isolation, while their tyrannical father--at times charming and witty but usually a terrorist in...

One of the best memoirs ever written

Published by Thriftbooks.com User , 15 years ago
Louise Kehoe is one of the bravest writers I have never met (although we did have plenty of phone conversations back when she was getting this book through production!) On the face of it, it's another coming of age book; but when you consider her history at the hands of her tortured and conscience-stricken father, and how the consequences of his grief cast a long shadow over the lives of his children...Kehoe masterfully organizes events, emotions, and personalities, and the result is an elegant, elegaic jewel of a book. There is ugliness; abuse at the hands of a German doctor; emotional abuse heaped upon Louise and her siblings, lies cafefully constructed by her father and executed by her otherwise forthright mother, the untimely death of her older brother, and her harrowing experience with anorexia nervosa. I wish Kehoe had published more; she is a truly astonishing writer.

Why Is This Book Out Of Print?

Published by Thriftbooks.com User , 22 years ago
This is a quirky, memorable story - the author is a brilliant writer. Many people have enjoyed this book, so why is it out of print? That really bugs me about the publishing world - how can they allow such great work to fall between the cracks, when real crap - and I mean crap - gets published. This book is a classic. It needs to be available in bookstores everywhere.

Published by Thriftbooks.com User , 22 years ago
Why did no reviewer mention one of the most shocking, pivotal moments in this book? That in 1966, a 17-year-old English girl named Lubetkin, while visiting a friend in Bavaria, was treated by a German doctor for an accident to her hand - and because he suspected that she was a Jew, he chose to inject the tetanus shot into both her nipples (which later abcessed and broke open)! In 1966! Aside from the story of her father's madness (grief-driven insanity is certainly what his behavior seemed to be), looms another question - how could this sort of sadistic torture have been allowed to pass unmentioned by any other observer and to go unpunished in 1966? And in 2000? The incident with the Nazi doctor and her parents seeming indifference to it finally lead the teenaged Ms. Kehoe to the realization that she had worth as a person and gave her the strength to break away from her father's "dark house". Unearthing the truth of her father's past buried in literally mountains of lies that comprised the deliberate, sly "shell game" Berthold Lubetkin inflicted on his wife and children is a testimony to the driving force of a tortured child's search for understanding to regain sanity from madness. These afternoon not quite four years after Dad's death, I appeared before a rabbinical court in Boston and, having satisfied the three presiding rabbis that I knew exactly what I was letting myself in for, was formally pronounced a Jew."

A daring and insightful autobiography

Published by Thriftbooks.com User , 23 years ago
Louise Kehoe takes the reader through a harrowing and difficult journey with no artifice. She manages to stay honest throughout which is what makes this story so moving. I would highly recommend this book over "After Long Silence" which is in the same genre but lacks the sincerity of this book.

Published by Thriftbooks.com User , 25 years ago
From the opening papragraph of description of the physical geography through the more difficult terrain of the interior geography of family and self, this book is an honest and eloquent account of growing up and going on, of the power of lies and the power of truth, and finally of acceptance and forgiveness. A finely detailed portrait of a damaged and damaging man, and of the author's road of transcendence and re-connection with her true heritage
Trustpilot
Copyright © 2022 Thriftbooks.com Terms of Use | Privacy Policy | Do Not Sell or Share My Personal Information | Accessibility Statement
ThriftBooks® and the ThriftBooks® logo are registered trademarks of Thrift Books Global, LLC